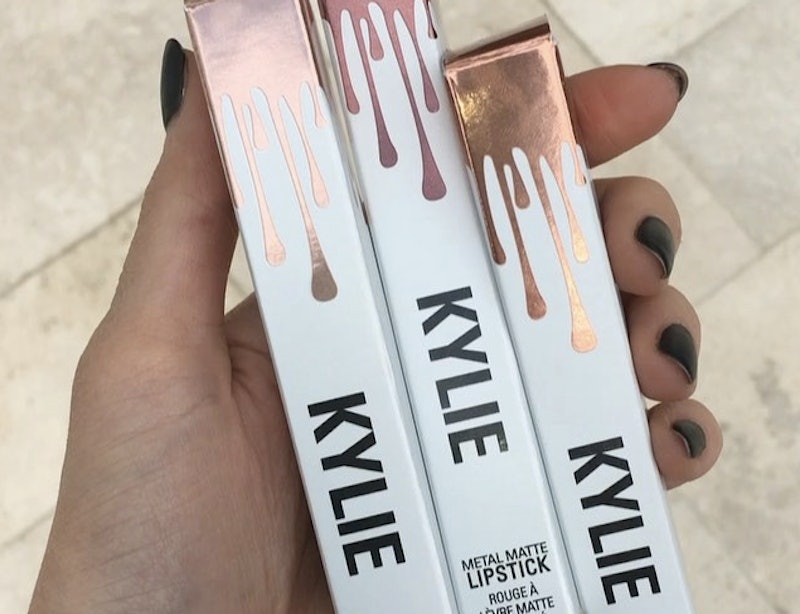 It's safe to say that Coachella fever is officially upon us. And what better way to kick off next weekend's festival than with the announcement of Kylie Jenner's new Metal Matte Lipsticks for Kylie Cosmetics? The young beauty mogul posted a video of three new metallic shades along with the promise that the Metal Matte Lipsticks are "dropping soon" just in time for Coachella.

In case you were wondering why King Kylie skipped the 2016 MTV Movie Awards, well, here's your answer. Her new set of metallic lippies — named Reign, King K, and Heir — joins Jenner's growing lineup of popular lip products. There's no word yet on the official launch date, but make sure to keep checking Jenner's and Kylie Cosmetics' Instagram and Twitter account. These shiny lipsticks could drop as early as Monday on kyliecosmetics.com and sell out in flash.

Jenner mentioning Coachella in her post also brings up the possibility that the company will sell her new Metal Matte Lipsticks at the festival, perhaps with a Kylie Cosmetics booth or an app that will let fans purchase her Lip Kits on site. The possibilities are endless when it comes to Jenner and her Lip Kit marketing team. Although I wonder if another Kylie Jenner music video is on the way for her metallic lipstick trio?

Check out the shimmery packaging.

I don't know about you, but I think Kylie Jenner just owned Coachella, y'all.