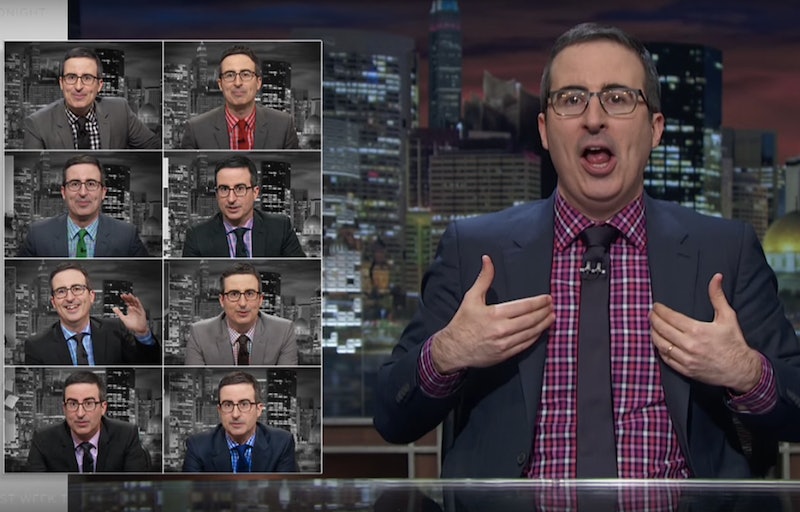 Your credit score, or "the single most important three-digit number in your whole life — other than, of course, 311, the Beatles of rap rock," can make or break your life. And no, that's not being dramatic, especially when you watch John Oliver's latest episode on credit reports. The Last Week Tonight host lifted the curtain on these almighty numbers in the only way he knows how: viral sabotage.

See, having good credit isn't just about scoring a low interest rate on a bank loan or signing an apartment lease. Some employers check your credit to determine whether you'd be a good hire because of an outmoded industry adage that if someone has good credit, then they must be reliable at managing a company's money.

"Is it though?" Oliver asks. "Because, look at me: my credit is probably fine, but I routinely waste HBO's money on stupid costumes, pyrotechnic displays, and checkered dress shirts. I clearly cannot manage this company's money well."

The problem is that credit reports themselves are often faulty. One government study Oliver cites found that a quarter of credit reports had an error and one in 20 were "seriously wrong"; a 2013 60 Minutes report suggested that "as many as 40 million Americans have a mistake" on their reports, with 20 million having "significant mistakes." And these mistakes are causing major, major problems for those affected. Oliver points to a woman who was shocked to find herself labeled "deceased" and a man who was denied an apartment lease because his background check wrongly labeled him a "terrorist."

"Holy shit," Oliver says. "That is terrible because one, he is not a terrorist, and two, I do hope we have a better strategy for dealing with terrorists than flagging their credit reports and denying them their dream apartments."

The Fair Credit Reporting Act requires companies to give you a copy of your credit report once a year (you can check it out at AnnualCreditReport.com), but the companies holding the keys to these reports don't always exhibit the best practices in ensuring people's histories are accurate. And it can be a years-long battle to fix these errors, as more than one Judy Thomas found out, according to Oliver.

To give these credit report companies a taste of what it's like to be mistakenly identified as someone else, Oliver created three fake businesses with similar names to the Big Three. Equifax's bizarro site is Equifacks.com, Experian's is Experianne.com, and TransUnion's is TramsOnion.com — all of which are real registered websites selling outrageous and terrible products (think dead orca steaks) because that's how Oliver makes a point. Drop mic.

Check out Oliver's segment on credit reports because it'll definitely make you wonder, "What's your number?"