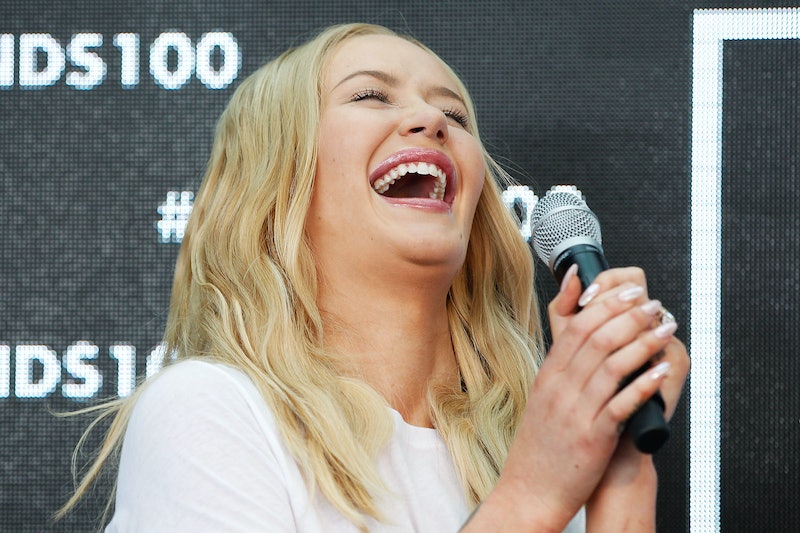 Wherever you stand on the whole Iggy Azalea/Nick Young fiasco, the rapper has made her stance clear: She's forgiving her fiancé, but she's not forgetting. And if any other videos come out that purportedly show him talking about women that he's cheated on her with, Azalea is chopping off Young's dick. At least, that's what she threatened during a recent radio interview.

To bring you up to speed, the NBA player and rapper were embroiled in a cheating scandal after a video leaked of Young seemingly discussing his recent conquests on tape. The video, which was filmed by his L.A. Lakers teammate D'Angelo Russell, features Russell asking Young about women he's slept with recently. According to Bleacher Report, Young told reporters after the incident, "I think it’s best me and D’Angelo handle our situation in a private manner. It’s something we need to talk about."

"Whatever bro code is, or whatever unspoken code that is, I don't really care. I have an actual, spoken commitment that you're gonna get married to me! And that involves not doing any of those other things," Azalea said on Orlando & The Freakshow on Wild 94.1. "Screw guy code. I'm not really concerned about guy code. How about, what this person said in the video? That's what I care about, sitting at home, obviously."

"I'm not cool with it. Like, you will have half a penis," Azalea said point-blank. "I already said, 'One more video, just one more thing, you will lose a quarter of your meat.'"

Azalea may be forgiving to a point (she is still engaged to Young, after all), but that doesn't mean that she is letting him off the hook so easily. The rapper is not effing around — in fact, she seems pretty determined to make that point perfectly clear in the public eye. And publicly threatening to chop off her fiancé's penis is certainly one way to go about it.

But she didn't stop there. When the host played devil's advocate and said that he heard that some athletes feel like they have to cheat (due to the dichotomy of being adored by thousands of fans and then coming home to a wife who demands he take out the trash?!?!), Azalea didn't take that one sitting down either. (Uh, nor should she!)

Explaining that reasoning doesn't make any sense because "I think I'm more famous than him" (as in, that doesn't tempt me to cheat), Azalea once again put her foot down and made it clear who is calling the shots in her relationship.

While it makes sense that the rapper is pissed (finding out that your fiancé may have cheated on you in front of the public eye is certainly not an easy situation to deal with), it's not necessarily all that healthy to be airing your grievances (and all of that dirty laundry) in such a public way. I get the damage control aspect (he hurt her in the public eye, she has to "get him back" — or at least portray that she is the kind of person who doesn't just let things slide so easily), but by going on a radio show and revealing to the world that she told Young she'd cut off his junk if anything like this happens again... to me, just seems like a cringe-worthy attempt to gain the power in both the relationship and in the public eye.

Maybe it's time to let sleeping dogs lie. And by that I mean, let's let the situation die down and play out how it will: If Young and Azalea do actually get married, if he cheats, if she actually follows through on her threat... whatever the outcome, it will all be news-worthy when if or when it happens. But for now, the two should probably work out things behind closed doors.

You know, as long as there isn't a pair of scissors near by.