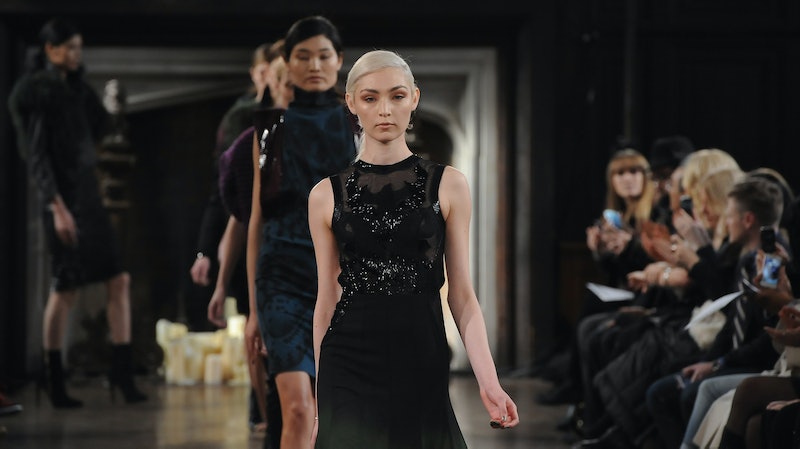 We've all had epic fails in our lives, but it takes an audacious designer to channel hers into the inspiration for a runway collection. After fielding a series of setbacks with her eponymous line a year ago, Shams decided to use the rejection to fuel inspiration for her Fall 2014 Collection, entitled "Epic Fail." Full of rebellious spirit in the form of sequined minidresses, daring leather shorts, and skin-baring knits, the collection is an ode to the designer's willpower in the face of obstacles.

Before debuting her Fall 2014 collection, the designer took some time to chat with us about the motivation behind her line and how New York City inspires her to push the boundaries of fashion.

Can you tell me a bit about your design aesthetic and how it's changed since you founded your company?

It started really not long ago… 2010 was my first season. I'd always done corporate design, and I'd always worked for big companies, so I was dying to get out all these ideas that I wasn't allowed to do for a long time… I wanted to do all these huge animal prints, and I really say I started the high-low hem and neon. But as time has gone on, fashion has gotten kind of crazy. Normal fashion is more fashion-y than it used to be. I guess I've kind of had to find myself as a designer without just rebelling, like who I am and what I want to do, not just what I don't want to do. It's an artistic thing for me. This collection is very conceptual.

How does designing your own line compare to working for other retail companies?

I still…work for Buffalo, which is a department store [line]…but this is just more artistic.

How has living in New York influenced your designs and how you think about design?

I've been here for twenty years, so honestly I can't imagine being anywhere else. It's home for me. I think it can be a problem, though, when it comes to sales. You think you can design these really crazy things because someone in New York will wear them, so it can be a hindrance. But of course, it's the most creative place, I think, in the world.

Can you tell me about the inspiration behind your Fall collection "Epic Fail"?

I had a lot of bad things happen with my collection in the past year. I got kicked out of my sales showroom, I had a lot of issues with shipping and factories, stuff like that. So when I started designing this collection…I was feeling really defeated and I couldn't think of anything. So that became my inspiration. You'll hear at the beginning of the show voicemails of people giving me bad news about my collection. I basically took the failure as my inspiration.

Having been through that experience and created this collection out of it, what advice would you give someone who is encountering similar roadblocks in a design or artistic career?