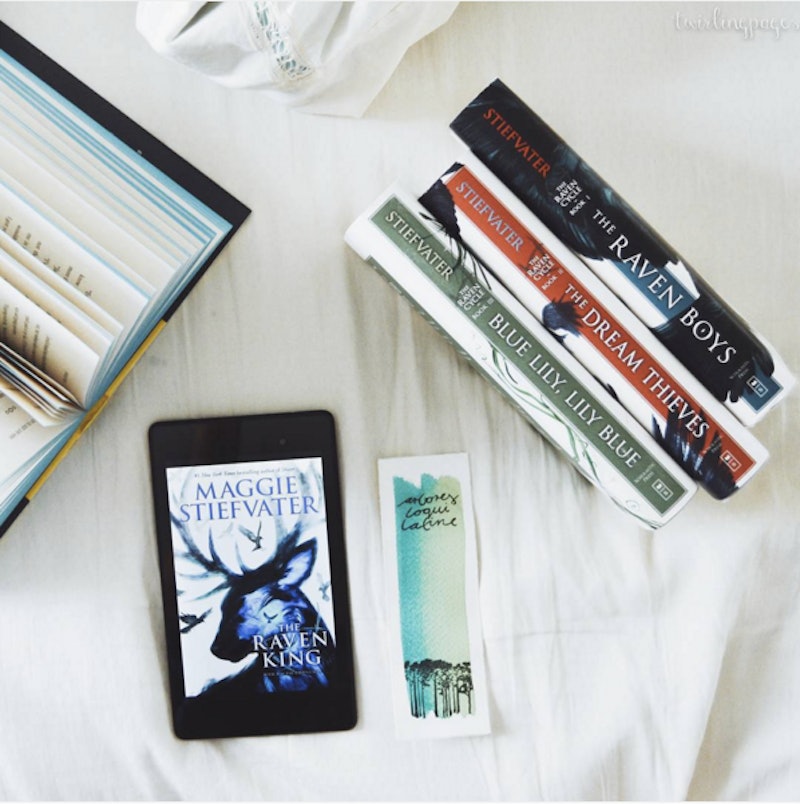 Ever since marathoning them over a year ago, I’ve forced the first three novels in Maggie Stiefvater’s acclaimed The Raven Cycle series on lots of friends. My default approach is to babble about fun fantasy romps, love triangles, kickass heroines, and burnt-marshmallow boys (i.e., outwardly nasty but otherwise mushy and delightful). But my obsession comes across most clearly when I try to convey my appreciation for Stiefvater’s treatment of poverty and classism.

The four novels in The Raven Cycle — The Raven Boys , T he Dream Thieves , Blue Lily, Lily Blue, and the forthcoming final novel, The Raven King , available April 26 — follows five teens' search for the tomb of a magical Welsh king. Four of our five protagonists are students at Aglionby Academy, an elite private school that educates the sons of the wealthiest and most powerful families in the world. Three of these boys — Gansey, Ronan, and Noah — are truly, obscenely, absurdly rich. Both the fourth boy, Adam, and Blue, our fifth and only female protagonist, are poor. Although the five teens are best friends and love each other deeply, they’re frequently frustrated with each other’s attitudes toward money and class.

A lazier writer would’ve used the friends’ bond as an excuse for skipping the conflicts, both internal and interpersonal, that arise from their inequalities. But not Stiefvater. Her explorations of plots and characters are ruthless, brave, and nuanced. Stiefvater's five teens don’t love each other because of or in spite of their differences; they just love each other, and try to understand each other, and try to make themselves understood. Sometimes they succeed.

I chose The Raven Cycle quotes discussed below because they resonate with my own experiences with income inequality. But Stiefvater explores many other sensitive issues in her series, including domestic abuse, grief, gender dynamics, sexuality, and abandonment. (She also avoids other issues, particularly race — the series’ entire principal cast is white.) If any of the aforementioned topics interest you, I doubt you’ll be disappointed by Stiefvater’s handling of them.

Really, though, even if pressing social issues bore you, this series will still delight. No supernatural fantasy adventures were sacrificed in the making of these books:

1. “When you had as little money as the Sargents did, sensibility in all matters was ingrained young.”

2. “Fuel was leeching slowly into Gansey’s expensive chinos, the second pair he’d ruined in a month. It wasn’t that he meant to be careless — as Adam told him again and again, ‘Things cost money, Gansey’ — it was just that he never seemed to realize the consequences of his actions until too late.”

3. “She imagined that easy smile Gansey had learned to throw up over his true face. With shame, she recalled how she had once wondered what would have made a boy like him, a boy with everything, ever learn such a skill. How unfair she’d been to assume love and money would preclude pain and hardship.”

5. “Some people envied Ronan’s money. Adam envied his time. To be as rich as Ronan was to be able to go to school and do nothing else, to have luxurious swaths of time in which to study and write papers and sleep….He was tired of squeezing homework in between his part-time jobs, of squeezing in sleep, squeezing in the hunt for Glendower. The jobs felt like so much wasted time: In five years, no one would care if he’d worked at a trailer factory.”

6. “‘I’m going to college.’ He didn’t add that he wasn’t killing himself at Aglionby to end up a fancy mechanic. That might have been good enough, if he hadn’t known what else was out there. If he hadn’t grown up next door to Aglionby Academy. If you never saw the stars, candles were enough.”

7. “Adam had once told Gansey, Rags to riches isn't a story anyone wants to hear until after it's done."

8. “When Gansey was polite, it made him powerful. When Adam was polite, he was giving power away.”

9. “She hadn’t thought she was curious. It hadn’t been an option, after all. Not being able to kiss someone was a lot like being poor. She tried not to dwell on the things she couldn’t have.”

10. "It struck Gansey harder than he thought it would. Some days, all that grounded him was the knowledge that his and Adam's friendship existed in a place that money couldn't influence... I am only my money. It is all anyone sees, even Adam."

11. "Adam wondered if he would look that official in a suit, or if his childhood would betray him and render him ridiculous... A small voice within Adam asked whether he would ever look this grand on the inside, or it was something you had to be born into. Gansey was the way he was because he had lived with money when he was small, like a virtuoso placed at a piano bench as soon as he could sit."