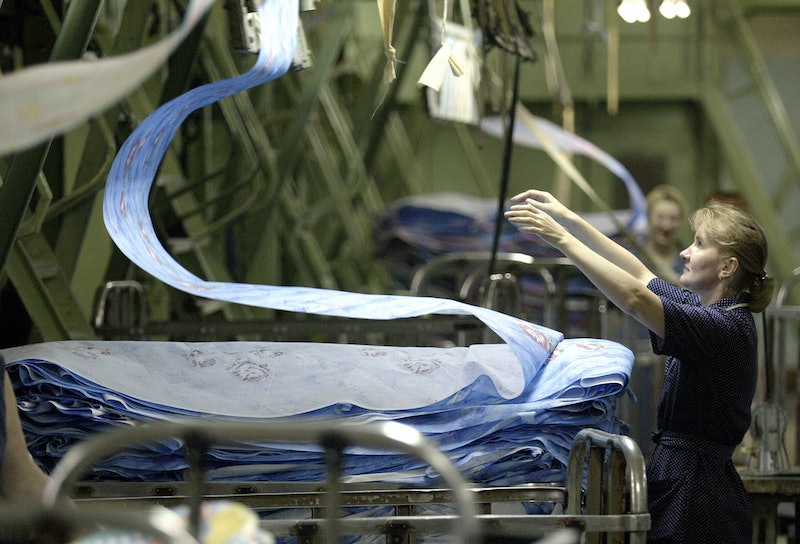 "Mind the gap" is an infamous warning issued thousands of times a day to passengers riding London's Underground subway, cautioning them to remain aware of the crevice ready to trip them up between the station platform and the subway car. America has a gap that needs minding too, although you can't see it and certainly won't hear any recorded warnings drawing it to your attention. Nevertheless, it endures, waiting for women to fall into it. The Equal Pay Act of 1963 made it illegal for employers to pay men more than women performing the same job, and yet more than 50 years later the gender wage gap still persists. Why hasn't the Equal Pay Act closed the gap?

Fifty-three years after President John F. Kennedy signed the Equal Pay Act (EPA) women still earn just about 79 cents for every dollar men earn, according to the American Association of University Women (AAUW). That means the law isn't (and hasn't been) working like it's supposed to. Sadly, that 79 cents — which equates to a 21 percent gap — is considered progress, a disgracefully inadequate amount of progress, but progress all the same. When the EPA was enacted in 1963, women earned 59 cents on the dollar compared to men. In half a century, we've come up just 20 cents. So, why has progress been so small and slow?

The answer is that loopholes buried in the EPA significantly reduce its effectiveness and are easily exploited by employers. The EPA prohibits sex-based wage discrimination, requiring employers to pay the same wage to men and women who perform "equal work on jobs ... which require equal skill, effort, and responsibility, and which are performed under similar working conditions."

But the act allows for men to be paid a higher wage than their female counterparts on the basis of seniority, merit, productivity, and "a differential based on any other factor other than sex." This vague language makes it difficult for women to prove they were paid less than a male counterpart because of their gender and deters many from even filing a lawsuit. Furthermore, the EPA barely punishes employers found to be in violation of the law. Employers are forced only to pay two years of retroactive pay to a plaintiff, a mere slap on the wrist for large companies.

The gender wage gap doesn't just hurt women, it hurts families and the economy too. A study in 2014 found that nearly half of U.S. moms were the main income-earners for their household. The less money a woman can bring home, the less money she has to feed, clothe, and house her family and the less money she can filter back into the economy. But the EPA alone won't be what brings the stubborn wage gap to a close. It, at the very least, needs an update, like one the stalled Paycheck Fairness Act could provide. Rather than celebrating how far women have come (a paltry 20 cents!), women need proactive solutions aimed at addressing the problem, because it's no longer enough to applaud progress — especially when it has trickled forth at a snail's pace.

More like this
'The Capture' Is Finally Back – & S2 Looks Tense AF
By Sophie McEvoy and El Hunt
The Lionesses Are Calling For Equal Access To Football In Schools
By Sophie McEvoy
What Is Megan Thee Stallion’s Net Worth? The Traumazine Hitmaker Isn’t Worried About A Budget
By Hugh McIntyre
Gemma Collins' Net Worth Is Only Going Up
By Catharina Cheung
Get Even More From Bustle — Sign Up For The Newsletter