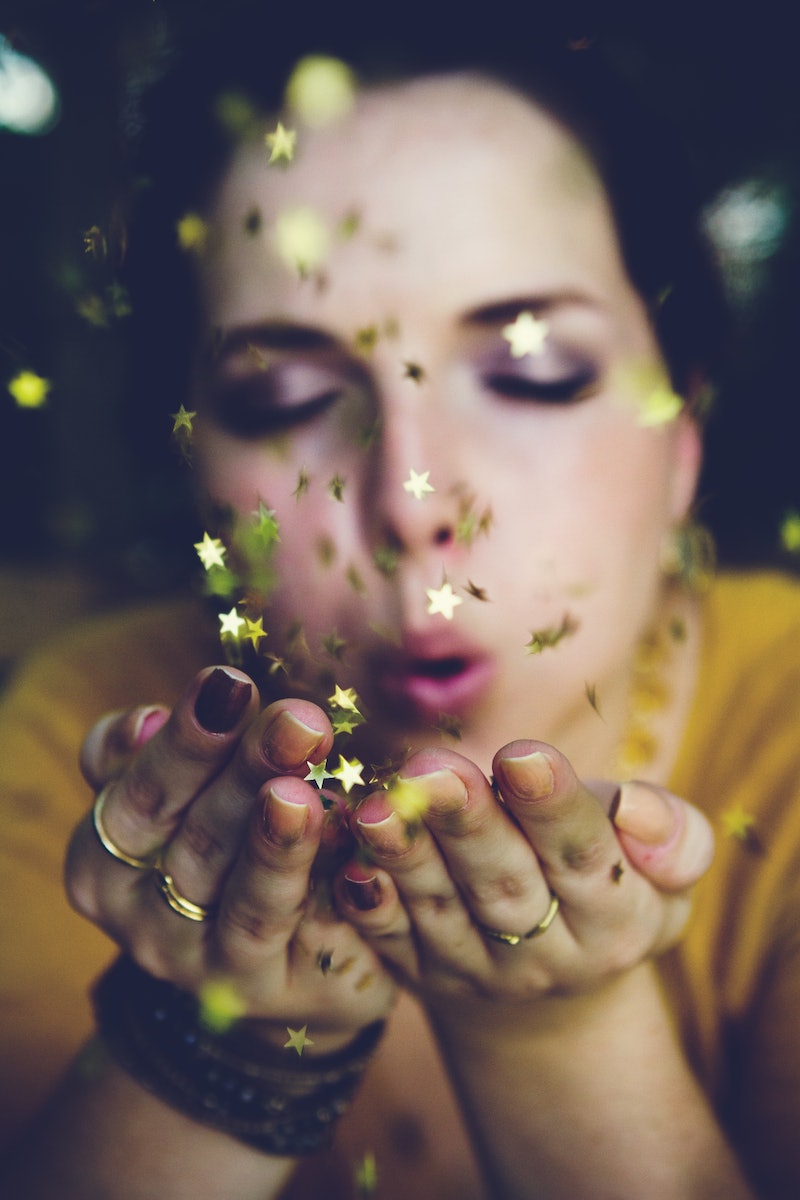 The Harry Potter series, The Magicians' move to TV, and the constant recommendations of The Night Circus by Erin Morgenstern have taught literary lovers that we want a little more magic in the world. Whether they are about witches and wizards and warlocks, magicians, or finding the magic in ordinary life, these 21 book quotes about magic can help us achieve that.

Authors like Morgenstern, J.K. Rowling, Tamora Pierce, George R. R. Martin, Terry Pratchett, Neil Gaiman, J.R.R. Tolkein, Ursula K. Le Guin, and countless others have brought magic to readers through the pages of their spellbinding books. So while we may not have gotten our letters to Hogwarts, spent a wild evening at a magical black-and-white circus, or traveled to a land of hobbits, elves, dwarves, and dragons, it doesn't mean that are lives are void of magic. We experience it all through our favorite fictional books, and we live it in our imaginations.

Plus, many authors are here to dispute that magic means wands and spells. Magic can be what happens when you know you're in love. It can be when you see hope in the future. And it can be any other small miracle we experience in our day to day lives. These 21 book quotes about magic can show us.

1. “Someone needs to tell those tales. When the battles are fought and won and lost, when the pirates find their treasures and the dragons eat their foes for breakfast with a nice cup of Lapsang souchong, someone needs to tell their bits of overlapping narrative. There's magic in that. It's in the listener, and for each and every ear it will be different, and it will affect them in ways they can never predict. From the mundane to the profound. You may tell a tale that takes up residence in someone's soul, becomes their blood and self and purpose. That tale will move them and drive them and who knows what they might do because of it, because of your words. That is your role, your gift. Your sister may be able to see the future, but you yourself can shape it, boy. Do not forget that... there are many kinds of magic, after all.”

3. “And above all, watch with glittering eyes the whole world around you because the greatest secrets are always hidden in the most unlikely places. Those who don't believe in magic will never find it.”

4. “The first thing every mage should learn is that magic makes fools of us. Now you may call yourself a mage. You have learned the most important lesson.”

5. “But you must not change one thing, one pebble, one grain of sand, until you know what good and evil will follow on that act. The world is in balance, in Equilibrium. A wizard's power of Changing and Summoning can shake the balance of the world. It is dangerous, that power ... It must follow knowledge, and serve need.”

6. “Of course you don't believe in fairies. You're fifteen. You think I believed in fairies at fifteen? Took me until I was at least a hundred and forty. Hundred and fifty, maybe. Anyway, he wasn't a fairy. He was a librarian. All right?”

7. "Much of what qualified as magic was simply desire in action. Witchcraft was different ― that took spells and rituals. But magic? A wish, a need, a hunger too strong to be denied ― these could turn into deeds when they cross a witch’s mind.”

― Deborah Harkness, A Discovery of Witches

― Susanna Clarke, The Ladies of Grace Adieu and Other Stories

10. “The magician seemed to promise that something torn to bits might be mended without a seam, that what had vanished might reappear, that a scattered handful of doves or dust might be reunited by a word, that a paper rose consumed by fire could be made to bloom from a pile of ash. But everyone knew that it was only an illusion. The true magic of this broken world lay in the ability of things it contained to vanish, to become so thoroughly lost, that they might never have existed in the first place.”

11. “The moment you doubt whether you can fly, you cease for ever to be able to do it.”

12. “There are some things, after all, that Sally Owens knows for certain: Always throw spilled salt over your left shoulder. Keep rosemary by your garden gate. Add pepper to your mashed potatoes. Plant roses and lavender, for luck. Fall in love whenever you can.”

13. “Hope can be a powerful force. Maybe there's no actual magic in it, but when you know what you hope for most and hold it like a light within you, you can make things happen, almost like magic.”

14. “If you look up "charming" in the dictionary, you'll see that it not only has references to strong attraction, but to spells and magic. Then again, what are liars if not great magicians?”

15. “I address you all tonight for who you truly are: wizards, mermaids, travelers, adventurers, and magicians. You are the true dreamers.”

16. "As there is little foolish wand-waving here, many of you will hardly believe this is magic. I don't expect you will really understand the beauty of the softly simmering cauldron with its shimmering fumes, the delicate power of liquids that creep through human veins, bewitching the mind, ensnaring the senses.... I can teach you how to bottle fame, brew glory, even stopper death — if you aren't as big a bunch of dunderheads as I usually have to teach."

17. “But remember. Just because you don't believe in something doesn't mean it isn't real.”

― Sherman Alexie, The Lone Ranger and Tonto Fistfight in Heaven

19. “Magic is a matter of focusing the disciplined will. But sometimes the will must be abandoned. The secret lies in knowing when to exercise control, and when to let go.”

20. “Of course there must be lots of Magic in the world," he said wisely one day, "but people don't know what it is like or how to make it. Perhaps the beginning is just to say nice things are going to happen until you make them happen. I am going to try and experiment.”

21. “To have endured all the horrors he did, to have seen the worst of humanity and have your life made unrecognizable by it, to come out of all that the honorable and brave and good person I knew him to be—that was magical.”