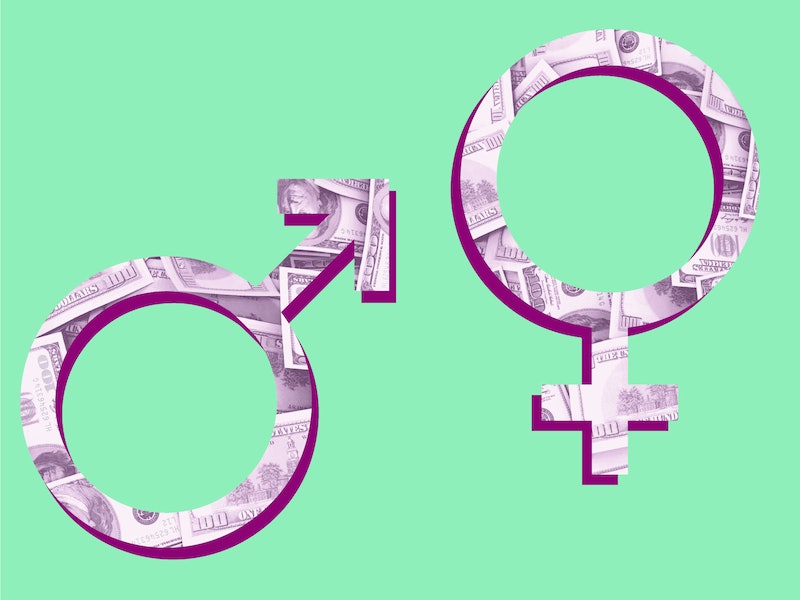 I really wish the mid-April date for Equal Pay Day were chosen at random, but the date for the "celebration" is steeped in significance. So, what is Equal Pay Day and how can we effectively talk about the gender pay gap in light of the occasion? This year's Equal Pay Day, slated for April 12, recognizes the date at which the median income for women working full time catches up to the 2015 earnings of men. And just in time for tax day, am I right, ladies? Maybe there's a bar hosting a Ladies Night with drinks priced 22 percent off in your area to make up for the annual 22 percent pay disparity.

Equal Pay Day was created by the National Committee on Pay Equity back in 1996. The day is annually observed on a Tuesday to represent the two extra days per week that a woman would need to work to make up the weekly pay difference. This Equal Pay Day, you're going to want to have your facts straight about the gender pay gap for when (when... not if) the inevitable anti-feminist internet troll drops a comment suggesting that the gender pay gap "isn't real." (If you are pressed for time, you might just forward them this nuanced analysis of the pay gap.)

If you are wondering why you're pressed for time, consider this statistic — as a woman in the United States, you're doing, on average, about an hour more of routine unpaid work (like household chores or caring for children) every single day than are the men in your household. That's an entire extra workday's worth of time each week.

Or, you could explain that there isn't a single metric in which women make the same as men in the United States — not hourly wages, weekly pay, or annual earnings. There isn't a single state in this country in which women make the same amount of money as their male counterparts. Increases in education don't protect women from the pay gap, and, the actual math suggests that a given woman is losing between $530,000 to $800,000 over her lifetime to similarly qualified men.

If you're not already anxiously shifting in your seat, hold onto your hats, because it's about to get intersectional over here. Say goodbye to the tiresome myth that women are paid less because we choose to be paid less.

Myth 1: If you control for all factors, women make about the same as men.

I touched on this a bit before, but women de facto work fewer paid hours than men because women work substantially more unpaid hours than men trying to have it all — a healthy family, a clean house, a happy boss, and a bountiful professional path ripe with opportunities for the future. And there's one important factor that can't be number-crunched away, and that's race. The pay gap multiplies when race is factored into the equation. African-American women over the age of 16 working full time, for example, made around 64 percent of white men's earnings in 2013. Latina women made 54 percent. And don't even get me started on the waterfall of legislation seeking to discriminate against queer and trans women. So, striving for equal pay in a world where a woman has less time and fewer opportunities, especially if she is a woman of color or a member of the LGBT community, is an uphill battle to say the least. Maybe women should just cut out sleep to catch up on that half million dollar unexplained gender-based deficit.

Myth 2: All women prioritize raising children over their careers.

If you look at high-profile moms like Marissa Mayer of Yahoo, who has had two pregnancies since taking the job as CEO of the internet company, troubling trends emerge. After her first pregnancy in 2012, people close to the company questioned her dedication to her new job when she took two weeks off to be with her son Macallister. During her second pregnancy, this time with twins, Mayer announced that she would only take two weeks off and was met with a barrage of criticism for not taking more time to be with her babies. So, if motherhood is really a choice that women can make without compromising their careers or their feminist principles, is there a magic number when it comes to days out of the office without labeling one's career a second-tier priority? Maybe we should start talking about the perception of motherhood as an inherent risk to a woman's career rather than tiptoeing around the issue.

Status: See why access to contraceptives is so important?

There is a documented psychological phenomenon in the workplace in which women are selected for leadership roles that are doomed before their first day. This phenomenon, aptly referred to as the glass cliff, suggests that women are seen as possessing qualities more suitable for manning a sinking ship. That doesn't really encourage a whole lot of leaning in if women are seen as only fit to captain a team with one arm tied behind each player's back. Democratic presidential candidate Hillary Clinton even sees a sharp drop in approval ratings every time she applies for a new position (followed by an increase in approval ratings when she's actually doing a given job). Last year, the United States women's soccer team earned less than a quarter of what their male counterparts earned despite bringing in more revenue, and winning the World Cup. And the wage and promotion gaps are just as staunch in industries that are predominantly female, like nursing and library management. So, tell me again how men are paid more because they so wisely choose to work in more higher paying jobs...