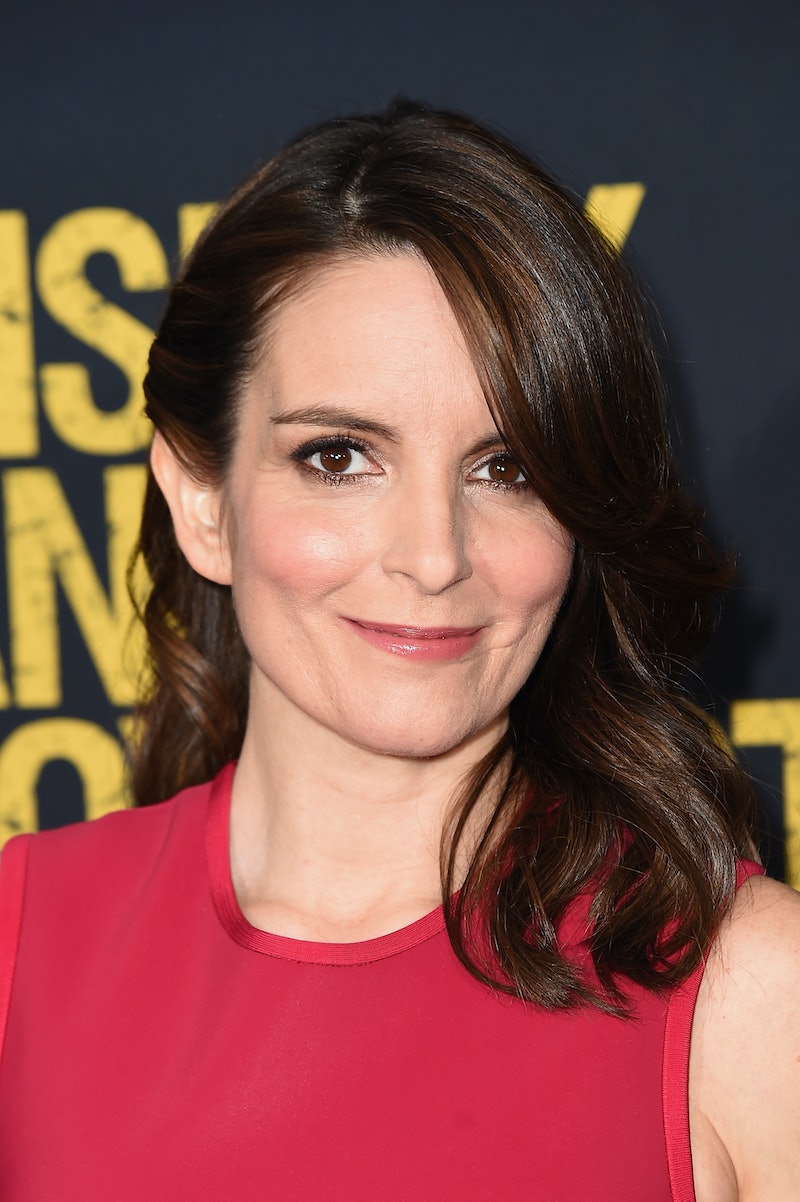 While the gender pay gap is still an issue that is glaringly problematic in 2016 across the board, there have been an increasing number of frank public discussions about it, particularly from celebrities. The only way to illuminate change is to talk about an issue, and I, for one, am grateful that many celebs are discussing the equal pay issue, because it gives hope that if public figures are using their voices to ignite change, that the rest of the world will follow suit. Of course, the salaries in Hollywood are on a much greater scale than what the average person will see in a lifetime, but it still matters: No one should do the same kind of work as someone else and receive less for it due to their gender.

When celebrities talk openly and candidly about the wage gap, it only serves as positive reinforcement that change can happen in our lifetime, and that is always a good thing. These celebrities simply aren't OK with making less money than a man simply based on gender, and they're using their public stature as a way to break down these barriers for all of us. It's incredibly inspiring and also super critical that they do.

Lawrence has been one of the most outspoken actors fighting the wage gap in Hollywood in recent times, and her candor as a young, A-list star is exactly what is needed to fuel real, actual change. In a Lenny Letter essay on the topic, Lawrence wrote,

When the Sony hack happened and I found out how much less I was being paid than the lucky people with d*cks, I didn't get mad at Sony. I got mad at myself. I failed as a negotiator because I gave up early. I didn't want to keep fighting over millions of dollars that, frankly, due to two franchises, I don't need.

I think it’s a good thing for someone like Jennifer [Lawrence] to speak out; it means an awful lot to women. Sure, there’s been cynicism toward her speaking out and the fact that she makes a lot of money, but she is completely and selflessly rising above that. [The discrepancy] is inherently unfair and she has an enormous platform to speak out against it. Men in Hollywood look up to her because she is powerful. She’s using that platform to correct something that isn’t right. It’s a long overdue conversation and it’s admirable what she has done. This is an age-old issue that’s in every part of society.

Beyoncé wrote a poignant message in 2014 about gender equality in The Shriver Report. She wrote,

We need to stop buying into the myth about gender equality. It isn't a reality yet. Today, women make up half of the U.S. workforce, but the average working woman earns only 77 percent of what the average working man makes. But unless women and men both say this is unacceptable, things will not change. Men have to demand that their wives, daughters, mothers, and sisters earn more—commensurate with their qualifications and not their gender. Equality will be achieved when men and women are granted equal pay and equal respect.

Arquette has made it her mission to use her celebrity to shed light on the equal pay issue, petitioning to the Supreme Court and U.S. House of Representatives to ratify the Equal Rights Amendment, which Arquette says in her petition was "first introduced in 1923 by Alice Paul, is an amendment to the U.S. Constitution that affirms that all citizens deserve equal rights under the law regardless of sex or gender. Seems self-evident, right?" She added,

Do you think that women’s equal rights are guaranteed by our constitution? Sadly, they are not. The ERA never passed, leaving women’s rights up for interpretation. This imbalance has been demonstrated time and time again in the highest courts in the land, where women often lose even when clear bias is shown. Women’s rights are seemingly at the mercy of whoever is in office or on a judicial bench at any given time.

Arquette's petition has raised upwards of 102,000 signatures since its creation in February 2016.

Williams has long been an advocate for equal pay in the professional sports world, and in 2005, she spoke about the pay disparity at a Grand Slam Committee meeting. According to espnW, Larry Scott recalled her saying,

Imagine you're a little girl. You're growing up. You practice as hard as you can, with girls, with boys. You have a dream. You fight, you work, you sacrifice to get to this stage. You work as hard as anyone you know. And then you get to this stage, and you're told you're not the same as a boy. Almost as good, but not quite the same. Think how devastating and demoralizing that could be.

Echoing a similar sentiment as Mulligan in regards to Lawrence's Lenny Letter, the actor told a red carpet interviewer,

Stone was quick to acknowledge that the wage gap issue is important beyond the high salaries in Hollywood, telling People that change "has to start with regular pay, not just for movie stars, but regular pay for the regular woman in the regular job," and discussing times early in her career when she remembers, "sitting in my kitchen with my manager and just crying and saying I'm not going to work until I get paid. I still got paid so much less than any men."

The actor reportedly told British Vogue in 2015 about a personal experience she'd had with pay disparity, saying,

It was a play with just two of us onstage and I was offered less than half of what he was going to be paid. If it was two men, it wouldn't probably happen. Sad, but I walked away … The only way is to make a stand. We are going to have to make sacrifices to make change. I want to turn up and feel dignified.

In 2015, Paltrow told Variety regarding equal pay in Hollywood: "It can be frustrating. It can be painful. Your salary is a way to quantify what you’re worth. If men are being paid a lot more for doing the same thing, it feels sh*tty."

Seyfried told the Sunday Times in 2015 of a shocking situation she faced on a project,

A few years ago, on one of my big-budget films, I found I was being paid 10 percent of what my male costar was getting, and we were pretty even in status. I think people think because I’m easygoing and game to do things, I’ll just take as little as they offer. But it’s not about how much you get, it’s about how fair it is.

In regards to the wage gap in the film industry, the actor told Variety in 2015, "It’s a f*cking sexist industry. I don’t understand why genitalia makes a difference. Creativity is creativity."

The actor penned an essay for Glamour magazine in 2015 discussing this issue. She wrote,

In the past few months, I've become convinced of one thing: If I were a man, I'd be paid more. I realize that some people may not sympathize with an actress who gets to be in movies and on TV or a living. But if you take away names and vocations, the fact is that in 2015 a man is still getting paid more money to do the same job a woman does, in Hollywood and everywhere else. And no matter where you live or what you do, that's bullsh*t.

In support of his co-stars Lawrence and Miller, Cooper told Entertainment Tonight,

There's a double standard in the whole world, yeah, for sure. This is just one aspect. Anytime there's a place where a voice can come out and be outspoken — something Sienna did, or Jennifer — that's great. ... I think it is making a difference.

In another example of a show of support for Lawrence, Alba told Cosmopolitan UK in April 2016,

Women don't get equal pay, there are not as many women in government positions or business positions. It's just not equal. And until there is equality, you're going to feel that, in any industry. But I was like, girls should have an equal seat at the table. Take Jennifer Lawrence. I mean, she's opening films — she's the box-office draw just as much as any guy, if not more. She should be compensated for that.

In 2014, UN Women Goodwill Ambassador Watson created a campaign around the issue of gender equality. Her campaign, HeForShe, addresses issues ranging from equal pay to equal access to education for women and girls, and in her introductory speech, Watson said, "the reality is that if we do nothing it will take 75 years, or for me to be nearly a hundred before women can expect to be paid the same as men for the same work."

Dawson pointed out to MTV News that the issue is not merely one of gender, but of ethnicity and race, also. She said,

The soccer star told Today in March 2016 that the issue is not relegated to Hollywood, but professional athletics as well:

Theron made headlines when she negotiated equal pay to her male co-stars for the sequel to Snow White And The Huntsman, telling Elle UK,

I have to give them credit because once I asked, they said yes. They did not fight it. And maybe that’s the message: That we just need to put our foot down. This is a good time for us to bring this to a place of fairness, and girls need to know that being a feminist is a good thing. It doesn’t mean that you hate men. It means equal rights. If you’re doing the same job, you should be compensated and treated in the same way.

At Variety's Power of Women luncheon in 2015, Hayek said, "This is a problem that is in every single industry. If you have the same capacities and you are doing the same job, it is criminal not to pay the same salary."

When discussing the roles available to women in comedy, Fey told Town & Country about questions she faced when promoting her film Sisters with Amy Poehler saying,

Every single interviewer asked, "Isn't this an amazing time for women in comedy?" People really wanted us to be openly grateful — "Thank you so much!" — and we were like, "No, it's a terrible time. If you were to really look at it, the boys are still getting more money for a lot of garbage, while the ladies are hustling and doing amazing work for less."

The actor told Mashable her motivation comes from her own daughter, saying,

I have to be honest with you. I believe in equal pay, first of all. I’m sorry, if a woman does the same job as a man, she should be paid the same amount of money. She just should. That’s just the way the world should work. What are you telling your daughter when she grows up? "You've got to just understand that you’re a girl. You have a vagina, so that’s not as valuable." What are you telling her?

In a powerful speech at the 2012 Democratic National Convention, Washington expressed the importance of standing up for equal rights. She said, "Today there are people trying take away rights that our mothers, grandmothers and great-grandmothers fought for: our right to vote, our right to choose, affordable quality education, equal pay, access to health care. We the people can't let that happen."

These quotes are some seriously powerful examples of celebrities using their voice to fuel change in the gender pay disparity, not just in the film and sports industries, but in all work forces. Bravo to them!