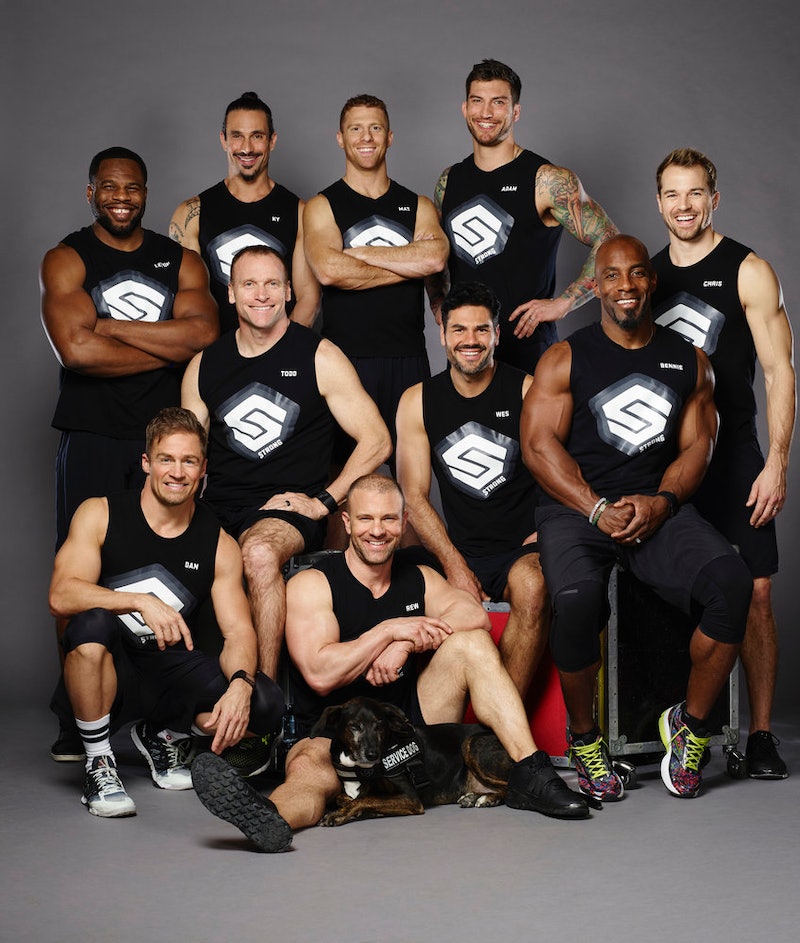 Spring is here and so is the first round of TV's midseason shows. On April 13, NBC will premiere Strong, a new fitness competition series that could be just as inspirational to viewers as it is to contestants. The series is hosted by Gabrielle Reece — volleyball star and fitness personality — and pairs 10 male trainers with 10 female trainees in a series of physical fitness challenges. Don't expect to see anyone in an easy class or wielding a light hand weight on this series; NBC's synopsis of Strong makes the difficulty level of the tasks the contestants will be expected to complete quite clear: "The challenges will put them to the ultimate test in strength, endurance and mental stamina," according to the show's website. So expect the trainers on Strong to work on strengthening contestants' resolve and mental endurance, in addition to physical training.

According to NBC, those trainers are among the very best at what they do. (And they better be. Sylvester Stallone is one of the show's producers; yes, Rocky is technically their boss.) Lots will be asked of these 10 fitness gurus as they give the competitors the tools and motivation they need to become confident, powerful athletes. Let's meet the Strong trainers, courtesy of their NBC bios, websites, and more:

Azubuike is a 29-year-old former NFL hopeful who turned to boxing and personal training after an injury derailed his professional football dreams. He now runs his own gym, Gloveworx, in Santa Monica. Soap opera fans might be interested to hear that he played Victor's personal trainer on two episodes of The Young & The Restless . And for the Backstreet Boys fans, Azubuike appeared as himself to train Nick Carter on his reality show, I Heart Nick Carter.

At 44, Durkin has racked up an impressive pile of accolades for his work as a fitness coach. Like Azubuike, Durkin was forced out of football by an injury, but didn't stop there. He founded and runs Fitness Quest 10 in San Diego, trains world-class athletes like Drew Brees (who tweeted his support for Durkin's Strong team!) is also a motivational speaker. In this STRONG extra, he talks about how growing up as the youngest of eight kids helped him grow his confidence and determination. "I had to fend for food, and I had to do something special to stand out," Durkin said.

43-year-old Ky Evans doesn't have the background you might expect from one of the country's leading personal trainers. Evans is a former ballet dancer with degrees in exercise science and biomechanics, which means he knows the science behind it all. On his official website, Evans has branded his specially designed workouts his "KYlosophy" (get it?); magazines like Self and Glamour have published his routines for their readers.

Did you have trouble getting to the gym this morning because you lost a few hours of sleep? Logan, 41, is the only person to have experienced triple cardiac arrest and survived. He now uses a heart therapy service dog (who will also appear on the show!) and trains celebrity clients in Manhattan Beach, California. Inspired by his health issues, Logan started the Rebel Hearts Foundation and is a spokesperson for Cedars-Sinai Heart Institute. "I’m more inspired to truly live than I ever was before, and to inspire others to live a fuller and healthier life," Logan said in a profile on the Cedars-Sinai website.

At 34, Miller is the long-time trainer to the underwater performers in the Las Vegas aquatic acrobatic spectacular, Le Rêve – The Dream at the Wynn in Las Vegas. That gives him a very unique skill set to bring to this competition. Miller had to leave that eight-year gig to participate in STRONG. "I still consider Le Rêve my family, and I miss working with them every day. But there comes a time when you have to pick yourself up and try to make a bigger impact,” he told the Las Vegas Review Journal.

37-year-old Okerson trains his Los Angeles clients in the L.I.T. method, a "low-impact, high-resistance" program that utilizes rowers and resistance bands. Of course, he also has a roster of high-profile Hollywood trainees. He served as Tom Cruise's full-time trainer for two years, including the preparation and shoot of the film Valkyrie. He also trained Cruise's then-wife Katie Holmes for her first time running the New York City Marathon.

Von Rothfelder is a 33-year-old former Mixed Martial Arts fighter and Milwaukee-based fitness coach. He's the brains behind an indoor/outfoor training center there called CoMo and is proof that not all great trainers come from Southern California. His hometown is so excited to see him compete on the Strong stage that they're hosting an Adam Von Rothfelder viewing party!

Hailing from New York City, Ryan, 35, is a trainer to the East Coast business world and a fitness model with a long resume, including work in Men's Fitness, Cosmopolitan, and more. On his personal website, Ryan gamely shares his first humbling experience with fitness in his bio. "Chris started his athletic career at the age of 4 when his family took him to the local high school track. He ran and cried his way through his first full lap, trying to keep up with his older brother, Andrew." Honestly, same.

Now 41, Dan Wells was inspired to get healthy and help others to as well when his father died of a heart attack. A CrossFit gym owner and competitor in the CrossFit games, Wells is also a dad of three. He recently told The Examiner that the high-stakes environment of STRONG made it a bit of an "emotional nightmare" but that his focus is on inspiring others. "It's blood, sweat and tears but mostly tears," Wells said.

Don't you wish these guys could show up and your house and train you? Watching them work on Strong has got to be the next best thing.

More like this
The 2023 Super Bowl Commercials Feature A 'Breaking Bad' Reunion & Missy Elliott
By Alyssa Lapid
'Breaking Bad' Duo Walt & Jesse Are Back — In This Super Bowl Commercial
By Jake Viswanath
Erika Jayne's Estranged Husband Tom Girardi Has Been Indicted On Fraud Charges
By Jake Viswanath
'RHOSLC’s Heather & Whitney Are Still On A “Friendship Break” After Season 3 Reunion
By Jake Viswanath
Get Even More From Bustle — Sign Up For The Newsletter
From hair trends to relationship advice, our daily newsletter has everything you need to sound like a person who’s on TikTok, even if you aren’t.