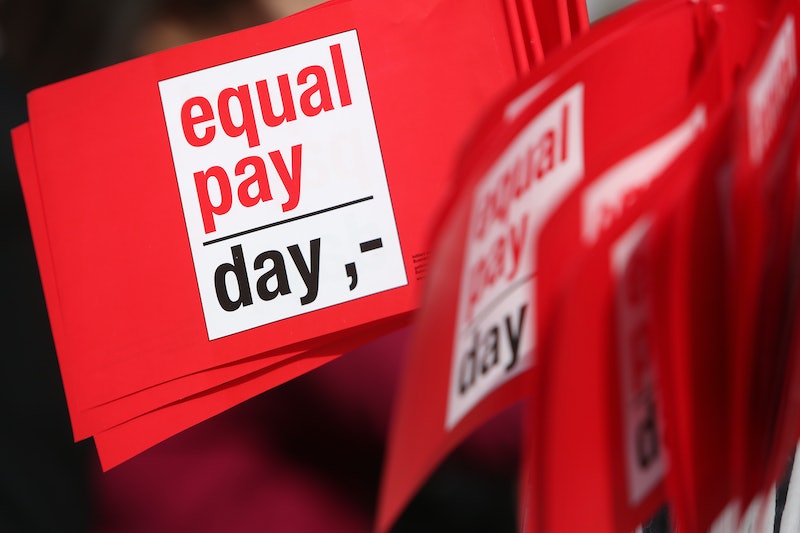 April 12 marks Equal Pay Day, the day on which American women finally catch up to men’s earning for the previous year. Yes, in 2016, the United States is still dealing with the shocking and depressing fact that the average women makes about 79 cents for every dollar that the average white man makes. While it seems self-evident why women should be paid equally, it’s always good to back up an argument with specifics, and there are a ton of specific reasons the wage gap needs to end.

This issue is much more nuanced than critics like to believe. Much of the gap comes from earnings lost due to underemployment and child care, which helps some detractors rationalize it as a myth. Yet still, about 40 percent of the wage gap cannot be “explained by measurable factors,” meaning it’s just plain old discrimination. Besides, even factors that aren’t overtly discriminatory are still discriminatory. But there’s a silver lining: The more intricate and convoluted a system of discrimination is, the more points of weakness it presents. That’s why it’s so easy to attack the wage gap. There are just too many parts of it that make no sense.

1) A Plurality Of Views Is Critical To Decision-Making

Women are underrepresented in the upper echelons of most professional institutions — there are two men for every woman among President Obama's most senior advisors, film studio executives were 100 percent male as of 2013, and only 20 women are CEOs of Fortune 500 companies. Although no single woman speaks for women everywhere, including the female perspective in socially impactful groups such as these creates a more rounded frame of reference when making far-reaching decisions.

2) Mothers Have Enough To Worry About

If you're a mom, Equal Pay Day actually doesn't even come until June 4 according to Lisa Maatz, vice president of government relations at the American Association of University Women. "There absolutely is a motherhood penalty when it comes to the pay gap," says Maatz. This is terrible for several reasons. First, it's really expensive to raise a child — it costs nearly $250,000 over 18 years, without even factoring in higher education. Second, punishing a woman financially for choosing to start a family while simultaneously shaming women who choose not to have kids is one of the worst double standards women have to face. Moms and women considering becoming moms don't need that.

4) The Number Of Minorities Is Growing

Tacking onto the previous point, something really bad is going to happen if the pay gap remains while the number of minorities increases. An economy can't sustain itself if a huge percentage of its workforce is being paid 50 to 65 cents on the dollar just because of their skin color. Wages have to increase, especially for minority women, as that demographic will continue to grow and have more purchasing power.

Women are twice as likely as men to have been on food stamps at some point in their lives — a program which cost the country nearly $70 billion in 2015 alone. By giving women access to better-paying jobs, the country can cut this cost drastically, saving taxpayer money for other initiatives — or keeping it in peoples' pockets.

Women tend to be more charitable than men, but that tendency can't reach its full potential if women can't reach theirs. If women had more disposable income, more money could be donated to causes that they care about, and more social issues could be improved.

7) Women Are Worth It

As workers, women have some advantages over men that should justify higher pay — one study found that women are more productive and less distractible. But also, women are human beings who don't deserve to be punished for their gender. By showing society that women can't be discriminated against through their paychecks, it slowly eats away at other aspects of misogynistic society, like rape culture and the parenting dichotomy.

This list could keep going on until infinity, but it should provide a solid basis if you need to step to anyone who tries to argue in favor of the pay gap. Just remember, things are slowly but surely getting better, and if women continue to spread the message and fight for equality, the country should see equal pay sooner rather than later.