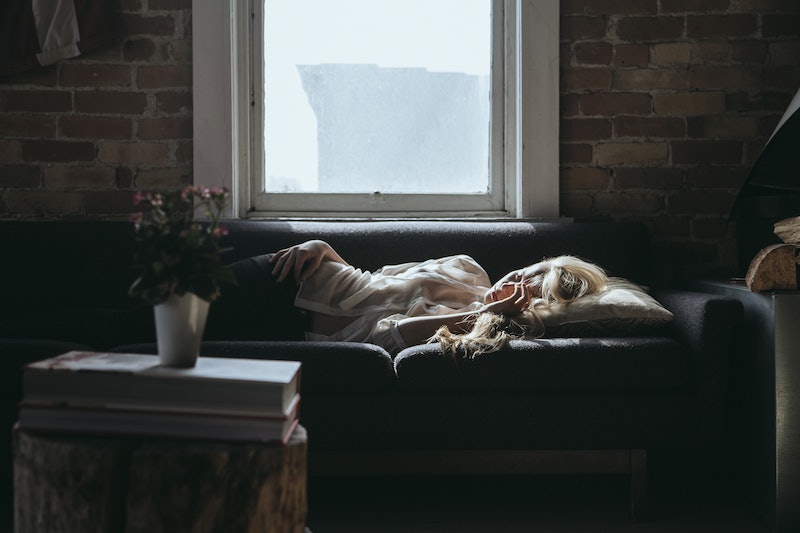 Most of us have done that regrettable thing where we have a few glasses (or bottles) o' vino at a friend's birthday bash and go to sleep a tad too tipsy. Your bed seems to beckon to you even more after a cocktail or two (or three). But if you have blood alcohol level over .05 percent, you will unfortunately feel the effects of the boozing during your beauty rest. It seems counterintuitive that drinking alcohol helps you fall asleep faster than usual, but the quality of sleep will be fitful and unsatisfying. As Jamie Foxx would say, you can blame it on the a-a-alcohol for throwing your body chemistry out of whack.

The negative effects of a couple nightcaps on your circadian rhythms can extend from changing your REM cycle to making you suffer through those uncomfortable night sweats. If you tend to pop bottles in the club till four in the morning on Saturdays, you may want to consider corking those bottles a few hours before you hit the sheets. A bad night's sleep can affect everything from your memory, concentration, to motor control, performance, and mood — these symptoms will only be heightened by the hangover.

So, before ordering another round, check out what happens to your body when you go to bed drunk.

1. You Fall Into A Deep Sleep Quickly (Too Quickly, In Fact)

Studies show that alcohol will indeed make you fall asleep pretty darn quick. But according to a review of 153 studies on the interactions of sleep and alcohol published in Alcoholism: Clinical & Experimental Research, a shot of vodka is not equivalent to a sleep aid. While booze may have some benefits at the beginning of the sleep cycle, it will negatively affect the latter half. "The immediate and short-term impact of alcohol is to reduce the time it takes to fall asleep," Irshaad Ebrahim, medical director at The London Sleep Centre, told Eureka Alert. "In addition, the higher the dose, the greater the impact on increasing deep sleep."

Slow Wave Sleep, or deep sleep, promotes the body's restoration and restfulness and is increased by alcohol. You reach this state of deep sleep which is free of dreams about eight minutes sooner than normal, says Men's Health, and you stay in it longer. When you have a few drinks and go to bed that "passing out" feeling is essentially you bypassing the first stage of sleep. That is the lightest stage, where you can be awakened easily. During the first hour or two you fall the fast onset of the slow wave sleep makes it very hard for someone to wake you, and you may have fewer REM cycles during this time.

2. Your Heart Rate Is Elevated

While you are in this state of regenerative sleep, not all is as peaceful as it seems. Your heart rate is elevated and your nervous system is more active than normal, according to Men's Health. Usually the heart rate and blood pressure increases mainly in later REM sleep, but the alcohol disturbs the flow of these natural processes. This will leave you feeling less rested in the morning, and the proud owner of some serious under-eye circles.

3. Your REM Sleep Is Disturbed

While a low dose of alcohol may not affect your short REM in the first stages of sleep, any amount of booze can delay and disturb the later REM cycles. Normally, you will go through between five to seven cycles of REM sleep a night — however, alcohol can decrease that to only one or two. The REM cycles are known for the body's temporary paralysis and vivid dreaming (we usually spend over two hours dreaming whether we remember them or not). REM is a restorative sleep, and according to some researchers, it allows your brain to process the memories, stress, and emotions of the day. It is so important, in fact, that if you do not get enough REM sleep during the night, the next time you fall sleep you will make up for it by going through elongated cycles. Without the proper amount of REM sleep, drinking before bed will leave you waking up groggy and catching up the next night.

4. You Sweat And Need To Get Up And Use The Bathroom

When drinking before bed, you may notice that you wake up constantly with the need to use the bathroom, and with a serious hankering for a glass of water. Alcohol is a diuretic, and encourages the body to release fluids because it blocks the hormone that helps the body retain its water. After a night of drinking you can expect that urge to use the bathroom to kick in and disturb your sleep, especially in the early hours of the morning when you are in the lighter REM stages. If you wake up smelling like a bar, that is because alcohol can widen your skin's blood vessels and increases your heart rate leading you to sweat more than the normal bear. When you awake you will be dehydrated no matter how many Gatorades you chugged before bed.

By relaxing the body's muscles, including those in your throat, a person may snore loudly once they fall asleep. Sleep speciality Michael Breus told WebMD that alcohol is also more likely to lead to issues of sleepwalking, sleep talking, and impaired memory. So if you have half an Italian sub in your fridge and are prone to sleep eating, a few glasses of wine may make that sandwich mysteriously disappear.

6. You Toss And Turn

Breezing through the earlier phases of sleep will make you more susceptible to waking up in the later half of the night — between the hours of four and six in the morning. Dr John Shneerson, head of the sleep centre at Papworth Hospital in Cambridge, told Drink Aware, "Deep sleep is when the body restores itself, and alcohol can interfere with this, as the alcohol starts to wear off, your body can come out of deep sleep and back into REM sleep, which is much easier to wake from. That's why you often wake up after just a few hours sleep when you've been drinking." As your body processes the alcohol, without the sedative effects you fitfully toss and turn and wake up frequently.

7. You Wake Up Exhausted (And Probably Hungover)

Waking up sweaty, groggy, and a little depressed is no fun. Neither is the headache that follows. Yuck.