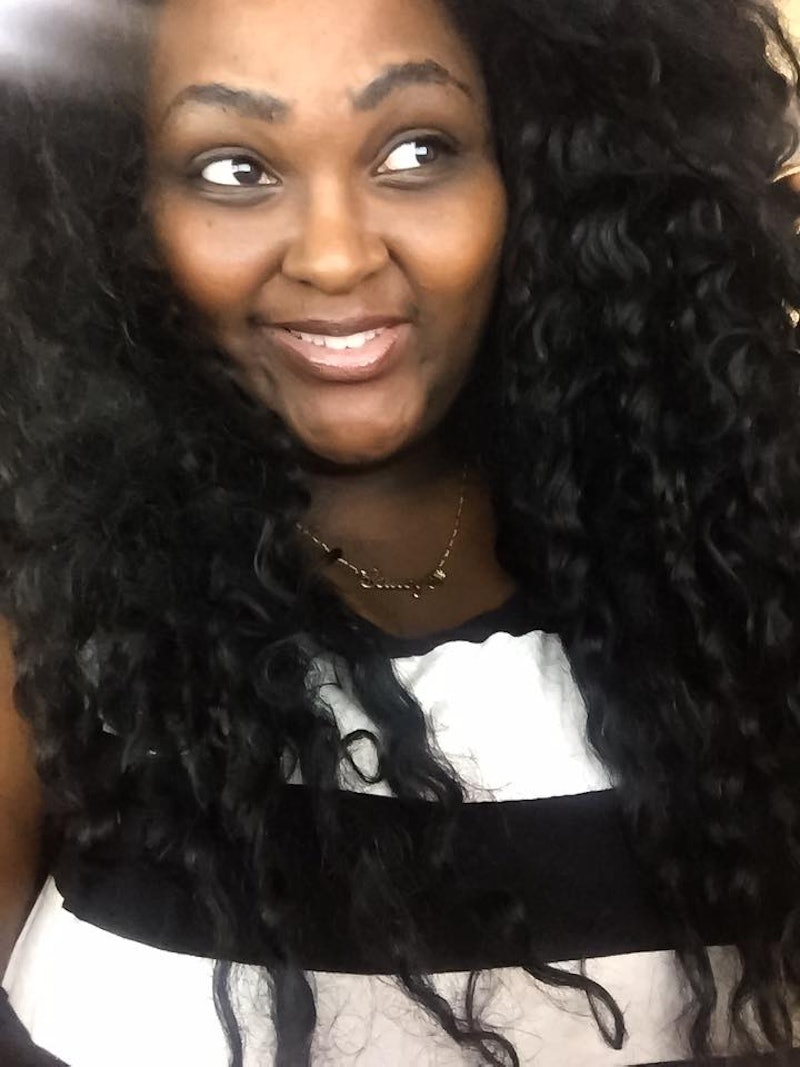 The other day, I overheard a disturbing conversation about plus size women without makeup. Two women (who were both straight size), were discussing their co-worker, surmising that her bare face was an indicator of how "lazy" and "sloppy" she was. Despite the fact that these two women were clearly more interested in being cruel than thinking critically, I started to ponder the notion. While thin and therefore socially acceptable women are often praised for going "fresh-faced" and "natural" on a routine basis, does the same thing apply to plus size women?

Sadly, the answer seems to be no. Because plus size women live in fat bodies, there exists a cultural expectation placed upon them: One that says they have to do basically everything else it takes to present themselves to the world as feminine, as carefully put-together, as beautiful. It's yet another unfortunate manifestation of the "good fatty" trope, wherein plus size women are "allowed" to be fat, if and only if they fit every other prescribed idea of beauty and respectability that's out there.

So in an attempt to push back against this unfair set of demands, here are 21 fierce and fresh-faced plus size women without makeup on, all of whom I spoke to via social media. Sure, they might want to wear makeup sometimes — but no one can tell them they have to.

For Dark, it's all about moving beyond people's expectations about what a fat woman should look like. "There's a huge expectation that femmes, especially fat femmes, wear a full face at all times," she explains. "I think a lot of that comes from our own internalized notions of what kinds of faces are the most beautiful — it's not necessarily makeup itself that's the expectation, but that our actual faces — our eyebrows, our eyes, our lips, look a certain way. The 'pretty fat' way. We've done a lot of work dismantling oppressive beauty standards in our communities, but need to be careful not to just approximate them into our own equally narrow replacements. I hardly wear makeup more than twice a week."

For this bare-faced woman, the reasons for not wearing makeup are pretty simple. "I have never been big into makeup," Louise says. "It looks pretty on someone else but has never been for me. Plus I am quite lazy during my morning routine."

For Glenn, the love of a bare face is newfound and exciting. "Taking off my makeup at the end of the day is refreshing and makes me appreciate my fresh face," Glenn says. "It wasn't long ago that I would have been too embarrassed by my skin to share a picture like this. I turned to self care and started loving myself more."

For Jones, expressing herself is more crucial when it comes to the clothes she chooses to wear. "I hardly ever wear makeup," Jones explains. "I love it, but I'm too busy to sit down and put myself together in the morning. I'd rather my outfits look [more] semi put together than my face, I guess."

For Tanner, going makeup free has some pretty practical applications as well. "I go makeup free most of the week to give my skin a break," she says. "Also, using makeup only once a week helps my budget."

Taller had an interesting perspective on the choice of wearing makeup every day; one that's an excellent thing for people to keep in mind before judging a plus size woman's decision to go makeup-free.

"The more I think about this today, the more I realize how life has changed for me," she explains. "I generally wear more makeup when I'm feeling my best; if I'm being the pin-up I want to be, I'm feeling the most confident. The past year (or two) I've been struggling with some of the most intense mental health issues I've ever had, and I've worn makeup far less than I ever did. In many ways, it is not who I am. I often feel like people feel that I am showing my 'true self,' but that's not me. I am all my makeup, my style. Sometimes that includes 'natural' looks,' but most of the time, it doesn't."

For Lee, the choice to go makeup free is about making the best decision for herself, not others. "Not wearing makeup affords me the luxury of time; not getting up extra early to get ready or taking off makeup at night, which gives me an extra hour," she says. "It's an hour I could spend meal prepping, studying, sleeping, doing yoga, or basically anything that would be to my personal benefit. Not to make other people feel more comfortable."

"I am very new to makeup and honestly only ever do it as a self-care ritual and I actually feel less confident going out with it on because I'm still insecure about whether or not I'm doing it well," Harrison says. "I try to see makeup as a fun way to express myself and not an obligation."

For Moreno, it would be preferable if people made no commentary about their face either way. "I do not really wear makeup because my skin is sensitive," they said. "And I am sick of hearing, 'Oh, you look tired,' every day — and hearing, 'Wow, you look nice,' when I do wear makeup. Leave my face alone."

Because sometimes, you just can't find a reason to do it.

For Tate, makeup is just part of the job. "I'm a 40-year-old makeup artist who can't be bothered to wear makeup anymore," she says.

For West, there is a certain expectation that comes along with the line of work she's in. "As a plus model, the expectations are high to always look polished and perfect," she tells me. "So much that people think I'm dependent on makeup. And that makeup is what makes me confident. I'm at my most confident with a bare face. I love my dimples and my moles! It's what makes my beauty."

Bonner actually debated posting this photo for the story, for reasons that a lot of plus size women could likely identify with.

"As a high femme, occasional makeup artist, and longtime makeup junkie, I have actually never posted a pic of myself on Facebook without makeup," she explains. "Until a couple of days ago. We took my daughter to a favorite restaurant for the first time, and I wanted to share the momentous occasion with friends. Problem was, I didn't wear any makeup that night. Not only that, but I also highly curate the presence of my double chin in pics that I take, and this pic has lots of chin. I was highly conflicted, as I have deeply internalized messages about needing to look, at the very least, 'put together' as a fat woman."

Bustle's own Dalessandro shared her general approach to makeup, knowing she looks great either way. "I love wearing makeup as a form of artistic self expression but I don't subscribe to the idea that I have to look 'done up' just to be seen as acceptable," she tells me. "If someone is alarmed by me without makeup or wants to call me sloppy then that's on them. I'm comfortable and beautiful both ways."

For Kerr, going makeup-free is about asserting the idea that she doesn't have to be completely made-up to be successful at what she does. "As a plus size blogger who is often in front of the camera or meeting with clients, I sometimes feel the pressure to wear a full face of makeup all the time in order to look 'well put together,' Kerr explains. "Over the years I've come to embrace my fresh-faced self and don't feel 'obliged' to wear a full face of makeup. My ability to do my job well does not require me to wear makeup! Most days, I don't wear any at all."

But it's not just skin concerns that keep her from going bare-faced. "I hate that wearing dresses and being dolled up makes me more digestible as a fat person," Amanda went on. "I don't owe my appearance to anyone."

Griswell's reasons for wearing makeup have certainly evolved over the years. "As a fat queer femme, I have felt like I use makeup to prove my femininity," she says. "Being fat in our culture erases our femininity — in school I was teased for being 'It's Pat' from SNL so as I grew up, I really went high femme partly to compensate. It's not all bad because I do love makeup and everything girly, but I refuse to be someone who won't be seen without it. I use makeup now as a creative expression, not to be deemed attractive or acceptable. Here's a bare-faced photo where my face is glowing not with highlighter but with being madly in love with my sweetheart!"

Simply put, and all you need to know.

"As an actor," Kullman says, "Makeup to me is a self-described word; it's a fantasy, not real. With makeup we get to play a part, we can be whomever we want to be. Sometimes it's a caricature, or a part of our own imagination, or sometimes it's someone completely else. The makeup isn't conducive to the character I'm playing, or even me getting out the house. So going bare for me is a reminder to always play the best part: myself."

Despite the fact that Waggoner initially found confidence in makeup, not wearing makeup has had a more profound impact. "I was a chubby kid growing up and I've never been skinny," she says. "Which I used to equate with beauty. As I grew up, I found solace in the ritual of makeup and building myself up with it. It's one of the best things that's ever happened to me. But with makeup came taking it off, which I was originally upset with and I thought I had two selves, a 'pretty' one, and an 'ugly' one. As time went on, and only very recently, I've been comfortable with either 'version' of me. I know that makeup is a tool that I harnessed for myself, and I will use it to bring healing, not pain."

For Hayley, feeling comfortable sans cosmetics took a while. But as you can see, she finally discovered that her truest self was the one she found most beautiful.

For plus size women going makeup free, the intention isn't to demonize femininity or those who do wear makeup every day. Instead, their decision is a clap back to a culture that demands respectability and femininity from plus size women, simply because of the size of their bodies.

These images are proof that plus size women don't have to wear makeup to present themselves as beautiful — and if they do want to wear it, that should be a decision made independently of societal pressures to do so.

Want more radical body positivity? Check out the podcast below, and be sure to subscribe to The BodCast for more self-love inspo!