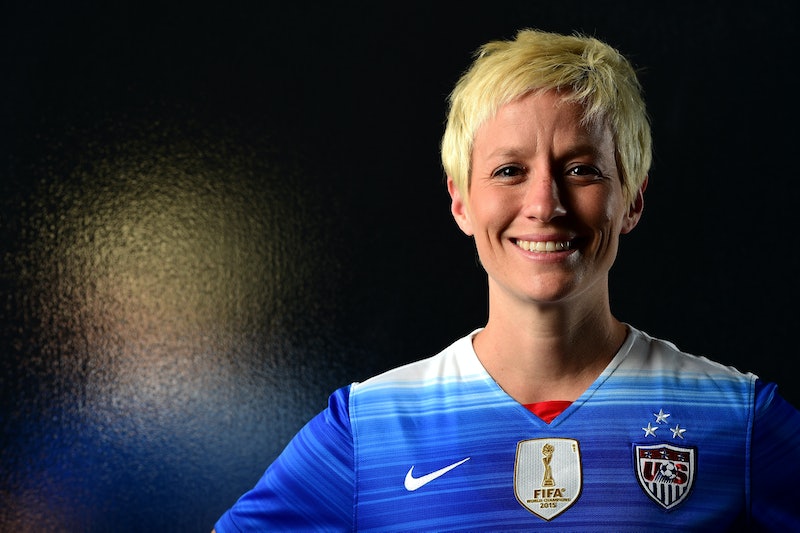 Wage discrimination affects American women across all professional fields, from your local diner's waitress to the Wall Street executive to some of the best athletes in the country. On Tuesday, Glassdoor hosted a round table discussion with guest U.S. soccer star Megan Rapinoe tackling wage inequality. With four other team members, Rapinoe recently filed a complaint with the Equal Employment Opportunity Commission highlighting how the U.S. Soccer Federation pays the women far less than the men's team. In its history, the women's team has won World Cups and gold medals at the Olympics while facing a past of wage discrimination. Why file the complaint now?

Hillary Clinton, also a guest at the round table, spoke in support of Rapinoe.

"We should just be happy we're there, right?" Rapinoe said dryly.

According to a Newsweek report, the pay disparity between the women's and men's soccer teams is abysmal: Each player on the USWNT earns $99,000 per year as long as the team wins 20 "friendlies." On the other hand, each men's player would earn $263,320 for the same feat and would still earn $100,000 even if the team lost all 20 games. The women get no extra pay for playing more matches, while the men earn anywhere between $5,000 and $17,625 for each additional match.

The issue is magnified by the fact that the women's soccer team won the World Cup in 1991, 1999 and 2015; the men have never won a World Cup. And last summer's Women's World Cup final was the most watched soccer match — men's or women's — ever in the United States, with over 25 million viewers.

When the women's team found out they had generated over $17 million for the U.S. Soccer Federation last year, "that was the tipping point," said Rapinoe. But regardless of all the numbers, Rapinoe said she still felt taking a stand for themselves was simply "the right thing to do."

Rapinoe is right — it is simply, timelessly, "the right thing to do." Pay equality does not only hinge on business decisions, such as how much revenue the team raked in last year. It's also a moral decision reflecting the idea that in 2016, in a post-Title IX country, wage discrimination should not exist. Amidst all the outrage over data and statistics, Rapinoe gave us this a firm reminder.

"There's kind of the argument of being twice as good all the time," she said, referring to meeting the differences in evaluations of women and men in the workplace. "But you want to be good enough just the way you are. We're very good the way we are."