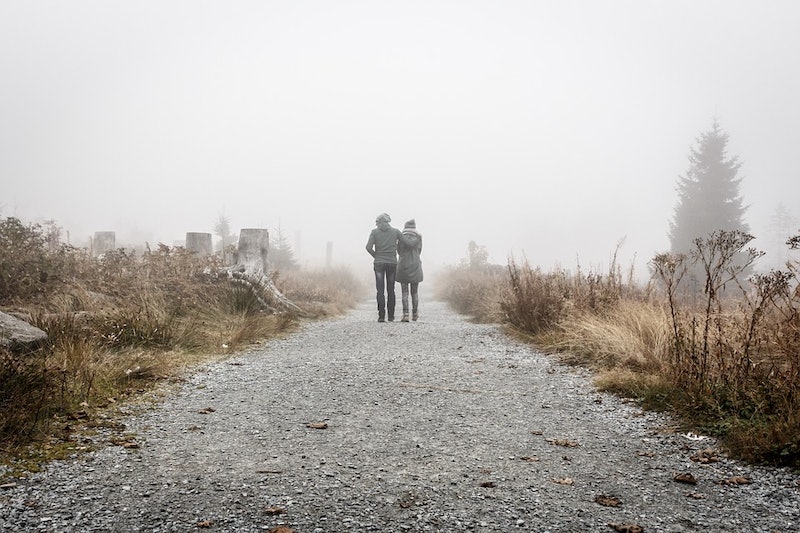 I'm kind of an expert on relationships that move too fast. If I'm being all the way honest, in the lesbian community, we're pretty famous for going from friends to forever in the time it takes to make a "you're the love of my life" playlist.

OK, I kid. I mean, the stereotype is called U-Hauling, and it happens, but of course it's not something all lesbians do. In fact, moving too fast can happen in any relationship. There just aren't as many jokes about it when non-lesbians do it.

When I was a Domestic Violence Victim Advocate and Planned Parenthood Certified Responsible Sexuality Educator, I saw people suffer all kinds of problems from moving too fast, from not knowing they were dating an abuser, to not realizing they weren't really ready for a relationship and having to break their partner's heart. Sometimes people get lucky and they just know, right from the beginning, that things are going to be really great, for a really long time. But for the most part, moving too fast is usually a huge mistake.

If these signs look a lot like your new relationship, there's no need to panic, but you might want to tap the brakes a couple of times and go forward a little more slowly.

1. You're Changing Your Address

You have a couple great dates, and next think you know, all of your stuff is in boxes and all of your sentences start with "we..." You probably have just as many people raising their eyebrows as you do wishing you well. That's because you can't really know someone, I mean really know them, after a couple of dates.

2. You're Meeting The Family Right Away

It's one thing to get tangled up in the life of the person you're dating, but it's another to start making attachments to their families and friends, especially when it's too early to tell if things are going to last. When you're part of a family, you don't just break up with that person. Often times, you lose people close to your partner that you really cared about. And they lose you. It's more serious than you might think.

Are you attaching official labels after days? Saying "I love you" after a couple weeks? Telling each other you want to spend your whole lives together, before you've even experienced all the seasons together? That's probably a red flag that thing are going too fast. Expressing intense feelings before you've had time to really get to know each other is often a sign of fear and insecurity more than love.

You might be moving too fast if you're naming your kids on the third date, or planning your wedding after a month or two. Even if you're just dreaming off all the things you'll do and places you'll go together, and not making concrete plans, you could be wandering into dangerous territory. It takes some people years before they're sure they want to make a lifelong commitment to another person. While there's no law that says you have to wait, there's also no law that says you have to rush.

5. You're Starting Off Big

Relationships don't typically start out big. When I have a friend tell me she's going on a romantic weekend in the mountains with someone she just met yesterday, my first thought isn't "how romantic!" it's "please don't get murdered." People who take the time to get to know each other usually do so over movies or dinner. Spending time away with someone you don't know very well isn't just a big step, it's a potentially dangerous one.

It's normal to think about someone new all the time. It's that fun, butterflies, and warm fuzzies time in a new relationship that's so wonderful. What might indicate that you're moving too fast is if you start obsessively text messaging each other, spending all your time together, and thinking about nothing else right away. The time after you first meet someone is not the time to turn your own life upside down and stop spending time doing the things you normally do.

7. You're Telling Your Friends They're The One

It's not impossible to go on a date with someone, tell your BFF that you're going to marry that person, and then have it be true. But it is unlikely. It's more rom com than real life. Odds are more likely that you want it to be true than that you have the real feelings to validate that decision. It's one thing to hope, dream, and wish. It's another to start investing your energy in those thoughts too soon.

8. You're Too Comfortable, Too Soon

You shouldn't really start acting like you're in a long-term relationship after only a couple of weeks. Selling the honeymoon period short is a shame. You have plenty of time to make budgets, pee with the door open, answer each other's phones, and overshare about each other's childhoods. Falling in love is an exciting thing that you shouldn't rush, or else you'll miss out on some of the magic.

9. You Have A Track Record Of Moving Too Fast

Is this relationship starting out the same as all your other relationships that started out with a bang, then crashed and burned? You will do yourself a big service if you take some time to learn the lessons of your past relationships before you rush into a new one. If this is a habit of yours, and you know it, and you're still rushing in to a new relationship, be honest with the person you're dating. Tell them you want to take things slow. And lean on your friends to help you stick to it.

10. Your Family And Friends Are Worried

The people who know you best probably have a good grasp on how you handle relationships. If they're coming to you with concerns, it might be in your best interest to listen to them. Odds are, they care about you and aren't trying to ruin your happiness. And if they say you're moving too fast, it's worth at least thinking about.

11. You've Dropped Off The Face Of The Earth

New relationships can feel like a whirlwind, but they don't typically take up your whole life. If you've dropped off the face of the earth so you can pour yourself into a brand new relationship, it's a red flag that things are moving too fast. You have to keep doing you in all stages of a relationship, but especially in the beginning. Because relationships should only add to your life, not complete it.

If you're guilty of the above, it may be time for an intervention. Because any relationship worth having is worth doing right.

More like this
4 Zodiac Signs That Will Take Forever To Admit They Like You
By Kristine Fellizar
The 3 Zodiac Signs Most Likely To Get Married Later In Life
By Kristine Fellizar
23 Super Sweet Things To Write In A Valentine's Day Card
By Karen Belz and Lexi Inks
Here’s What TikTok's "Mascara” Trend Is *Really* About
By El Hunt
Get Even More From Bustle — Sign Up For The Newsletter
From hair trends to relationship advice, our daily newsletter has everything you need to sound like a person who’s on TikTok, even if you aren’t.