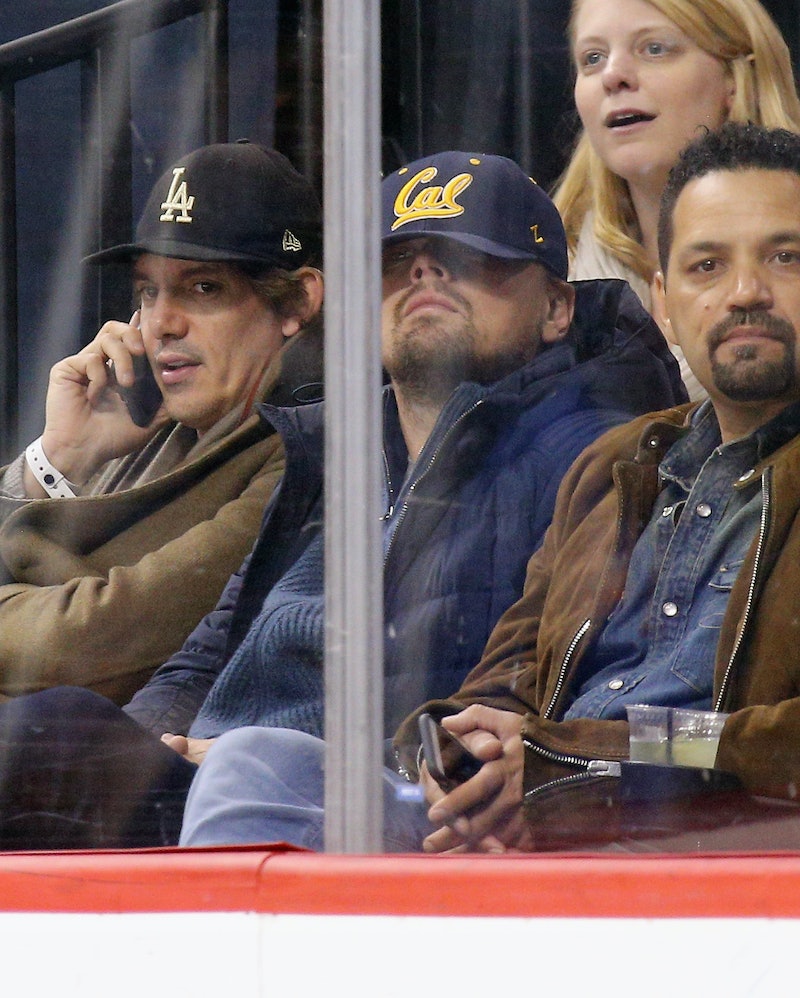 If you are ever in need of a way to improve your day, I suggest Googling "Leonardo DiCaprio hiding." Trust me, you will not be disappointed. It has become my new happy place. Not only does the Oscar-winning actor wow onscreen, but his hide-and-seek skills are beyond impressive. Seriously, he is really, really good at shielding his face. So much that it's time we discuss the funniest moments of Leonardo DiCaprio hiding.

If you haven't heard or seen one recent video, while attending a New York Islanders game last Saturday with his celebrity pals Kevin Connolly and Lukas Haas, The Revenant star tried to hide his face from the cameras and everyone else in attendance. If you're going to be in a huge arena for a sporting event, why try to hide your face? Really, what's the point?

Even the announcers of the game commented on DiCaprio hiding underneath his University of California, Berkeley hat while they tried to show celebs in attendance during the broadcast. Guess what? He may be a phenomenal actor, but the 41-year-old star isn't fooling anyone by keeping his head down and avoiding eye contact at all costs. Clearly, his buddy Connolly could have cared less, because he had his face out in the open, all while enjoying a refreshing beverage.

This isn't the first time DiCaprio has very obviously tried to hide in public. On more than one occasion, the Titanic lead has gone above and beyond to hide his face while out and about. Here are some of the funniest instances of DiCaprio putting his hiding skills into action.

When He Bundled Up

That's one way to stay warm — and avoid photogs.

When He Really Didn't Want To Breathe

Is that a towel? Is it shirt? Is it a rag? Who knows, but I just hope he found a way to breathe during this moment.

When He Tried To Avoid The Rain

When He Wanted To Eat Pizza In Peace

Seriously, what is happening?

When He Hid Under A Hat Again

Leo, everyone can see you!

When He Used His Hand As A Mask

Yep, we can still see you.

Now let's look at all of them side by side:

And the award for "Best Hider" goes to Leonardo DiCaprio

More like this
Jake Daniels Just Became The UK’s First Active Football Player To Come Out As Gay Since 1990
By Sam Ramsden
What Is Jeanie Buss' Net Worth? The Lakers President Is Uber Rich
By Hugh McIntyre
The 10 Best Cat Puzzle Feeders
By Lauren Moison
My Picky Eater Dog Absolutely Devours This All-Natural Food
By Allison Berry
Get Even More From Bustle — Sign Up For The Newsletter