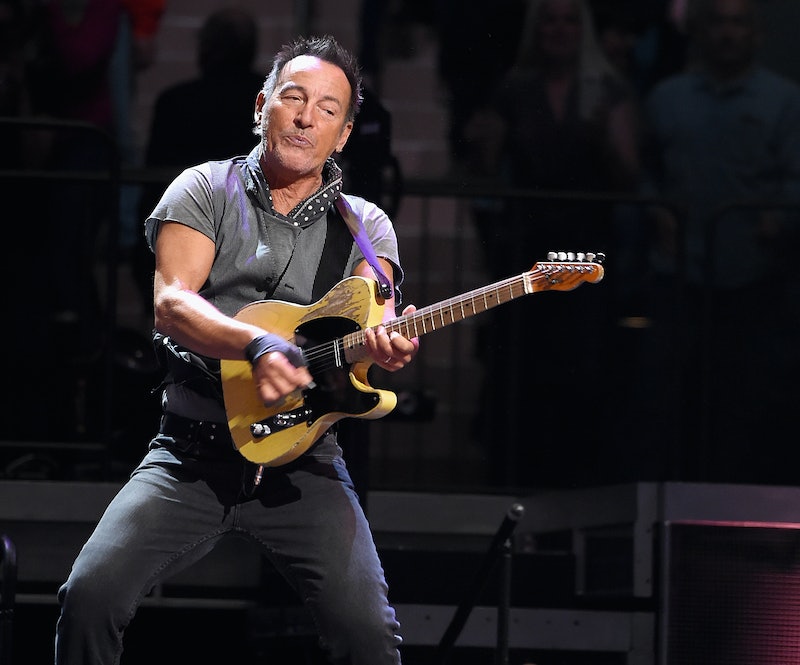 Throughout the country, bills designed to enable anti-LGBT discrimination have been popping up, and so have anti-choice laws designed to restrict access to abortion. Neither kind of law is popular with liberals (to say the very least) though curiously, only the anti-LGBT laws have prompted high-profile boycotts from leading companies, celebrities, and politicians in recent years.

The governors of New York, Vermont, and Washington have all put bans on state employee travel to North Carolina (some of it specifically for "non-essential travel"), and New York and Vermont's bans were also applied to Mississippi. North Carolina and Mississippi recently passed two of the worst anti-LGBT laws in recent years. The New York Times reported in April about the tourism hit the two states were already facing, with Charlotte, North Carolina losing $2.5 million in revenue due to canceled conventions, according to the Charlotte Regional Visitors Authority. Clearly, many companies and celebrities are making supporting LGBT rights a priority.

Why don’t these groups organize the same boycotts and backlash when it comes to reproductive rights?

Katha Pollitt, an author and columnist for The Nation who has written about why gay marriage is winning while abortion rights are losing, thinks the fact that women are almost exclusively the direct victims of anti-choice laws plays into the absence of formalized corporate and celebrity backlash. “I think the bottom line is same-sex marriage and LGBT rights generally are more popular than women's rights because the former are less threatening to the current social order and also are partly about men's rights,” Pollitt tells Bustle in an email. “Also, abortion is seen as shameful in a way same-sex behavior is not.”

While last year, some local businesses in Washington D.C. helped fight federal efforts to overturn city laws protecting against discrimination due to reproductive health choices and LGBT students (and were successful), it was on a much smaller, less publicized level than the big-name boycotts we've seen against against North Carolina and Mississippi.

There are, obviously, some difficulties comparing the response to these two different sets of legislations. The LGBT movement has seen a wave of unprecedented good news in recent years, in part because of major Supreme Court decisions in its favor. In 2013, there was the United States v. Windsor, which stuck down the Defense of Marriage Act. Last year, the highest court in the land affirmed that the Constitution protected same-sex marriage. Moreover, last year, President Obama issued an executive order that "prohibits federal contractors and subcontractors from discriminating on the basis of sexual orientation and gender identity." In general, LGBT people are visible and thankfully accepted in a way that was unthinkable just a handful of years ago.

Meanwhile, abortion rights haven't been in the limelight, so to speak. Roe v. Wade was decided in 1973. Not since Planned Parenthood v. Casey in 1992 has there been a major Supreme Court ruling on abortion rights (the Supreme Court will rule this year, though, on a case challenging Texas' House Bill 2 abortion restrictions). According to a 2015 Guttmacher Institute report, states added 231 abortion restrictions over four years from 2011 to 2015. Yet, these prohibitions often fell under the radar, perhaps because they were on the state, rather than federal, level.

Although differing amounts of mainstream attention have been paid to anti-abortion and anti-LGBT legislation, I find both sets of laws absolutely repugnant and disturbing. But that's also why I wonder why there's not the same level of backlash against them.

It may be that Americans in general may not feel as strongly defensive of LGBT rights as abortion rights. Jennifer Grygiel, assistant professor of communications at Syracuse University who has worked in the corporate world and identifies as gay, tells me there’s just not the same alignment in corporate America on abortion rights as there is on gay rights. The latter has widespread support “because people have accepted that the LGBT community has rights and deserves to be treated equally,” and because identifying as LGBT “impacts people across the board: all races; all ethnicities; men, women, etc.”

Mississippi’s awful new law shields individuals and private associations from legal consequences for discriminating against same-sex couples; people who engage in sex outside of marriage; and people who reject the notion that their gender identity was “objectively determined” at birth. North Carolina requires people to use the bathroom that corresponds with the gender on their birth certificate. These laws are damaging for LGBT people and potentially derail the work of the community and their allies, and, Mississippi's is potentially bad for any American who has had sex outside of marriage. Also, they’re both absurd.

Top companies have wielded considerable financial pressure to oppose these laws. The NCAA suggested that North Carolina’s new law may cause it to reconsider plans to hold tournament events there. Bruce Springsteen canceled a scheduled show in Greensboro, North Carolina, in solidarity with opponents of the law. In April, Pearl Jam canceled their concert in Raleigh scheduled for that month. Nick Jonas and Demi Lovato followed suit, jointly canceling concerts in Raleigh and Charlotte.

In Georgia, Gov. Nathan Deal vetoed a similar anti-LGBT bill in March under pressure from several Fortune 500 companies based in his state. Even the NFL suggested that passage of anti-LGBT legislation could cost Atlanta the opportunity to host the Super Bowl, potentially in 2019 or 2020.

While I am genuinely thrilled to see this comprehensive backlash against anti-LGBT laws, anti-choice laws are dangerous, too. They are zealously enforced, and they place both women and children in danger.

A 2014 study by Ibis Reproductive Health and the Center for Reproductive Rights found that states with more abortion restrictions perform worse overall on indicators of women’s and children’s well-being than states with fewer. Women who want to end a pregnancy badly enough will attempt to do so by any means necessary. Attempting self-induced abortions carry significant health risks and can potentially fatal. According to the latest statistics from the World Health Organization, 13 percent of all maternal deaths are due to self-induced abortions. While this is more in common in developing countries (where abortion is illegal or less accessible), there's evidence that U.S. women are increasingly seeking out ways to self-induce abortions, especially in states with restrictive laws, like Texas and Mississippi.

The Oklahoma House of Representatives recently passed a bill to revoke the licenses of doctors who perform abortion. An earlier version was already passed by the Oklahoma Senate, and at this point, it's largely a matter of whether Gov. Mary Fallin will sign it (she has a history of supporting anti-choice legislation). The Texas Policy Evaluation Project estimates that between 100,000 and 240,000 women of reproductive age in Texas have tried to end a pregnancy on their own without medical assistance.

So, where’s the corporate economic pressure on this issue? Where are the governor-issued travel bans, as happened in New York, Washington, and Vermont, and canceled rock shows? Springsteen just played a show in Texas on April 5 and he played shows in Oklahoma and Georgia earlier this year. Texas, Oklahoma, and Georgia have some of the most restrictive abortion laws in the country. Why aren't performers boycotting states with anti-choice laws — and why aren't Americans, especially pro-choice advocates, outraged by the dearth of backlash?

Kaylie Hanson, the National Communications Director for NARAL Pro-Choice America, tells me that she thinks the disparity in responses to anti-choice and anti-LGBT legislation comes down to the issue of stigma. She says in an email that "when you combine the deceptive nature of these [anti-choice] bills with the stigma against women who choose to have abortions, and the lack of public knowledge about abortion, you face an uphill battle to engage the public against these dangerous pieces of legislation. Advocates are doing incredible work to reverse the stigma surrounding abortion, and we know that when those efforts pay off, people are more vocal against anti-choice bills."

She adds: "We know that seven in 10 Americans support legal abortion access. The more people vocalize that support, the easier it will be to defeat these policies."

There's data to suggest that even though the majority of Americans support legal access to abortion, there is still stigma surrounding it. A 2015 Gallup poll found 45 percent of Americans felt abortion to be "morally acceptable." While ensuring the rights of same-sex couples is only one segment of LGBT discrimination, it's worth noting that the Gallup poll found that 63 percent of Americans found gay and lesbian relationships to be "morally acceptable," nearly 20 points higher than that of abortion. Even more striking was the fact that the moral acceptability of lesbian and gay relations had increased 23 percentage points since 2001; abortion had gone up three percentage points.

The fact that abortion is considered less "morally acceptable" means companies may have less of an incentive to take a stand against anti-choice laws than anti-LGBT laws. “I suspect that we don't see the same kind of response to anti-choice legislation largely due to the stigma that remains around the issue that might make corporations and businesses more hesitant to take a stand on the matter,” Ally Boguhn, political and campaigns editor at Rewire, an online publication that focuses on issues of reproductive health and justice, tells me in an email.

When I ask why we haven't seen the backlash when states pass anti-choice laws in recent years, Deputy Legal Director of the American Civil Liberties Union (ACLU) Louise Melling tells me, “I think it’s because the country has come to understand that [what’s happening in Mississippi and North Carolina] is discrimination … we now understand that when you refuse to provide a service to a same-sex couple, that’s discrimination. We don’t ask, ‘Is there another place for you to go?’”

Meanwhile, Melling says that anti-abortion laws aren't seen as a form of discrimination in that same way. "People tend to think of anti-choice legislation as being about abortion, not about women,” says Melling.

“The real issue is that reproductive rights and the ability to decide whether and when to have a family is essential to women’s equality ... I don’t understand why this issue has come to be about a service, and not about the people. The bakery turning away a gay couple is not about the cake, it’s about the couple.”

I reached out to LGBT activist and current legal affairs columnist Jay Michaelson at The Daily Beast because he's contemplated the disparity in the recent responses to reproductive rights versus LGBT rights. Michaelson says in an email to me: “Discriminating against LGBT people in the name of religion is now widely seen as discrimination. Yet, limiting women's healthcare choices in the name of religion is not, even though of all the healthcare choices in the world, only women's are restricted in this way. There are many reasons for this, but the contrast is striking.”

Michaelson outlined some of those reasons in a 2014 article, “Ten Reasons Women Are Losing While Gays Keep Winning," and specifically brought up the difference in corporate responses to the two issues in the article:

Because LGBT equality has been successfully framed in the context of discrimination and fairness, and because it has many privileged male champions, it has been easy for corporations to line up behind it, and reap the financial rewards of being seen as pro-gay.

Corporations and politicians tend not to take strong stands until there is little risk and a clear reward for doing so. But those who play hardball when it comes to anti-LGBT laws and hold their fire on abortion restrictions are underestimating how much women need and deserve their support. Restricting access to abortion means limiting women’s access to everything that constitutes adult life in a free and just society: health, time, money, and the ability to work.

It’s time for corporations and celebrities, especially those that claim to value women, to stand up and say so.