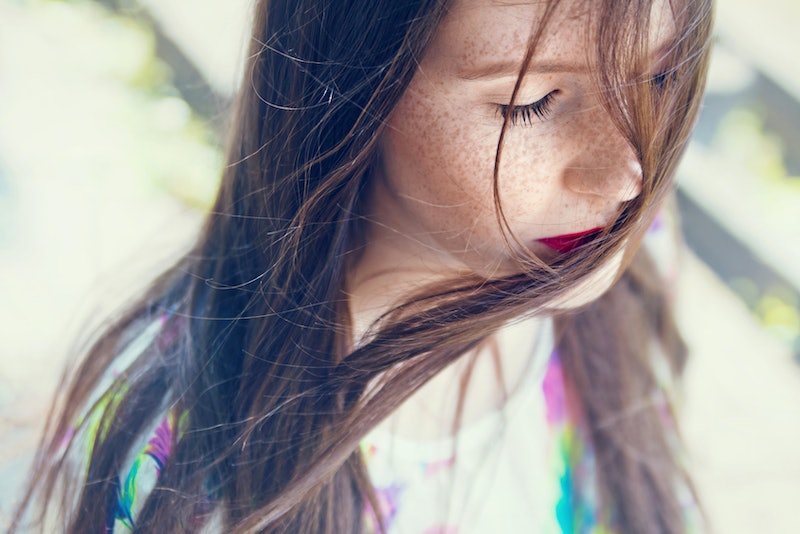 British commuters are expressing outage about a Match ad that implies that freckles are “imperfections.” Posters adorning the walls of London tube stations feature an image of a woman with freckles and red hair along with the slogan “If you don’t like your imperfections, someone else will.” Unsurprisingly, people have taken umbrage at the dating site’s suggestion that “freckles” and “imperfections” are somehow equivalent, as well as the ad’s assumption that people with freckles regard their skin as flawed. I’m a freckly person myself, and I can sympathize with people’s anger about what seems like a totally unnecessary jab at those of us who happen to have freckles. My own initial response upon seeing the ad echoed that of others: “Ouch. What the hell, Match?” Thankfully, in the wake of complaints about the posters, Match has apologized and said it will remove the ads.

The Guardian points out that the controversial poster is part of a larger Match advertising campaign that’s been going on since 2014. The “#LoveYourImperfections” campaign has previously featured posters with images of people who have gently humorous “imperfections,” like “Charlotte can’t pronounce ‘Marylebone” and “Mark never has his travel card ready” (that one inspired a meme of its own).

The major problem with the new ad is that the “imperfections” in question are no longer funny personality quirks, but physical traits. People seem most angry about the one featuring freckles, but another poster implying that heterochromia (the condition of having two differently colored eyes) is a flaw is also highly problematic.

Twitter users have taken to social media to complain about the ad. Some have tweeted photos of “alterations” that people have made to the posters; for example, one person put a series of Post-its across the ad, asking, “Sorry, but isn't judging people on skin pigmentation universally regarded as a dickish move?” The UK’s Advertising Standards Authority has also confirmed to The Guardian that it has received complaints about the Match ad, though the organization emphasized that it has not opened an investigation.

In a statement to Mashable, Match responded to the criticism and said that offending people wasn’t the company’s aim:

We believe freckles are beautiful. The intention of our ‘Love Your Imperfections’ campaign is to focus on the quirks and idiosyncrasies that people wrongly perceive to be imperfections – this can include freckles, a feature that is sometimes seen as an imperfection by people who have them. We’re sorry if this ad has been interpreted in a different way and we apologise for any offence caused, this was not our intention.

Our overall campaign is all about celebrating perceived physical and behavioural imperfections, from having freckles to being chubby, messy or clumsy. The adverts are designed to encourage everyone to be proud of their individuality, as the features that make us unique are often the ones that make us most attractive.

Whatever Match’s intentions may have been for the ads, something clearly went wrong in their execution. Yes, we should all be so lucky as to find partners who love us for who we are, imperfections and all, but it’s problematic for Match to try to define what those imperfections might be — because we all perceive our bodies and our personalities in different ways. In the case of the freckle poster, Match may have meant to celebrate freckles, but the ad itself only reinforces negative perceptions of freckly skin.

Critics of the posters will be glad to know that they won’t be up for much longer. In its statement, Match said, “[W]e are in discussions with our relevant partners about removing these posters as soon as possible.”