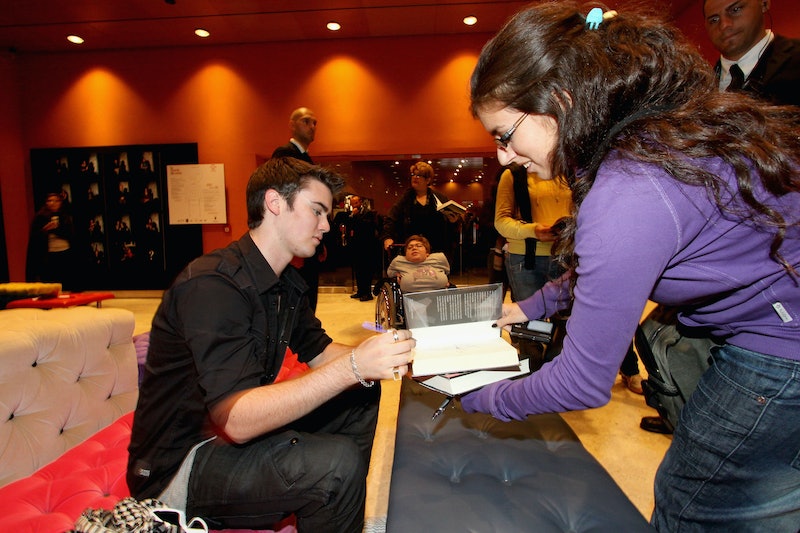 We've all been frustrated when our favorite literature characters make nonsensical decisions, whether it's dating people clearly wrong for them, getting involved in a dangerous activity, or keeping a secret when we can see that the truth will heal all. I, myself, have been vocal about my own issues with Bella and Edward's actions from the Twilight series, so I'm not immune either. However, sometimes critics can take their arguments too far — and when they do, YA fans and writers are letting them know that they will step to the characters' defense.

Mesrobian's post, with the snarky title "Separating Fiction from the Author, aka the post where author Carrie Mesrobian explains that fiction is fiction," delved into the idea that she, as a fiction author, is not endorsing her characters' actions, despite her misguided critics' assumptions. But the part that really stuck for the YA Highway writers was the idea that critics thought her characters engaged in poor decision-making. Mesrobian writes:

Fiction is about problems. It’s not about good decision-making. It’s about conflict and struggle and battle and terrible, terrible decisions. Sometimes people make good decisions in fiction, but there’s no requirement that they always will. You want to read about people making good decisions, you’ve got two choices:

- read a pamphlet in the waiting room of the Guidance Counselor

If you want to understand the complexity of life, read about someone fucking things up.

In honor of Mesrobian's point here — who wants to read a book about perfect people making clearheaded decisions every step of the way? —the #sensibleYA hashtag was born. Hubbard, Schusterman, and Hart encouraged YA fans to rewrite dialogue or scenes to their favorite books to make them "acceptable" to YA critics and tag them with the hashtag.

The Hunger Games was a fan favorite re-write, with even Schusterman chiming in:

(Is it just me, or would Prim circa Catching Fire and Mockingjay actually have a good shot in the Games?)

As expected, Twilight and its heroine Bella also got attention:

Some fans reached into many lesser-known YA works, while others went back in history to Judy Blume:

Other favorites touched on fantasy, love triangles, and best friends with only one pair of jeans:

And finally, two of my personal favorites:

Of course, because social media and nuance are not best friends, some fans who may not have read the original post or tweet commandeered the hashtag to show their anger, thinking that these tweets were beating down YA rather than showing its critics how all great stories would be lost with "sensibility."

And while the tweets are directed at YA, this seems like a critique relevant to all works of fiction. Couldn't you imagine a tweet from The Great Gatsby with Gatsby realizing what a snob Daisy is? Or Romeo & Juliet, with Romeo deciding to stay out of conflict and not going to the Capulet party?

The critics argument isn't a new one. We've all yelled at movie screens for the horror queen to run out the front door, not up into the attic. But Mesrobian is right: Is being insensible somehow inorganic in life? Is being insensible not truthful for teenage protagonists? It's easy to look back in hindsight and think, hey maybe I shouldn't have dated that jerk in high school, but then how would you have learned? And from an author's perspective, how would you have gotten this amazing story?

But this #sensibleYA idea was not the whole gist of Mesrobian's post. The YA author touches on another important critique she receives from reviewers: That she somehow as an author is endorsing her characters' bad behavior.

Mesrobian admitted that she got angry on Twitter the night before, explaining:

This is not a new problem in pop culture — just ask Lena Dunham about Girls. But it is troublesome that it tends to center on female authorial voices, such as Dunham and Mesrobian, who create characters that aren't, let's say, loving and wholesome. While Jerry Seinfeld, Larry David, and to some extent, Louis C.K. are praised and rewarded because of their often mean-spirited or selfish protagonists, Dunham and Mesrobian are left explaining that, no, their characters aren't representative of their actual selves. Because, fiction. Mesrobian goes on:

Would it comfort those readers to know that, no, I don’t say to my kid, “Hey fuckface! Go brush your goddamn teeth so we can go smoke pot together and then talk about how having meaningless sex when you’re 15 is a great idea!” Would they like to know about all the boring evenings I spend making her do her homework and reading to her and telling her to go to bed 99 million times? Would they like to know what a boring, moral, routine life I lead?