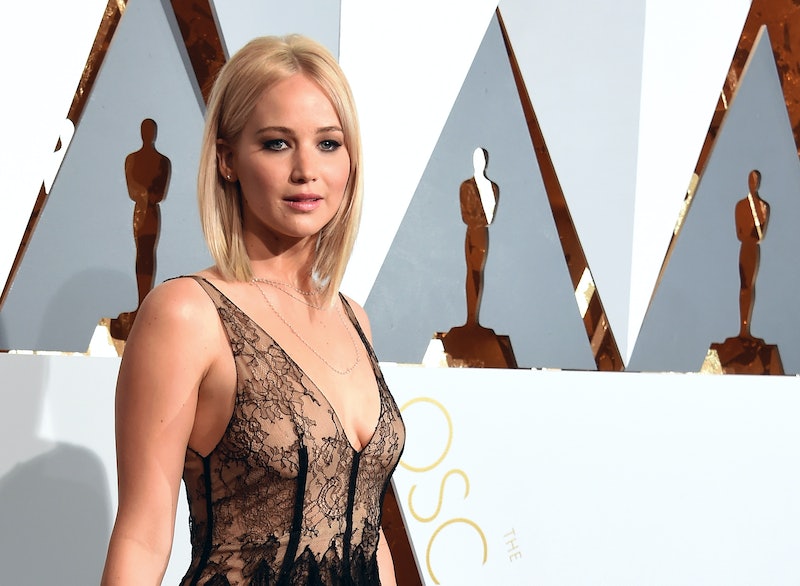 Tis the season for celebrity hair transformations! Between Kristen Stewart dying her hair platinum blonde, Emma Roberts debuting rose gold locks, and now another starlet with a new 'do, I can barely keep up with the constant change-ups of Hollywood's hottest manes. Jennifer Lawrence's platinum blonde hair is even more blonde than before, proving the actress is practically getting blonder by the minute.

The 25-year-old stepped out to promote her upcoming film, Passengers, at the CinemaCon Sony Pictures event in Vegas on Tuesday, and there was something blatantly different about her. At first glance, I couldn't quite put my finger on it, but after taking a closer look it was clear. J. Law dyed her hair an icy cool platinum shade, crossing the border of blonde and inching closer and closer to white.

It seems Lawrence has undergone this makeover at the perfect time, because icy-colored tresses, also known as snowlights, are totally #trending. The look is very Princess Elsa circa Frozen, and it suits the actress remarkably well. It wasn't that long ago that she unveiled her golden blonde lob, but I guess she just can't get enough of the shade because her hair keeps getting lighter and lighter.

Take a look a the icy blonde hue.

It may be a subtle change, but it certainly can't go unnoticed.

Now let's take a look at the side-by-side view.

In honor of J. Law's gorgeous new 'do, let's take a look at the evolution of her ever-changing hair, shall we?

When the actress first came on the scene, she sported a golden beige, sun-kissed shade of blonde that sort of resembles Gigi Hadid's hair color.

As time went on, her hair started looking more like dirty blonde, with subtle hints of light brown tones.

In 2012, Lawrence sported chocolate brown locks, a major departure from her usual blonde, marking the ascent of her role as Katniss Everdeen in The Hunger Games.

Straight back to sandy-colored tresses, but this time with a dramatic new cut.

Is that a hint of strawberry blonde I see?

2015 was really the year of the platinum blonde shade we have come to know and love on her.

Here is another look at her latest icy blonde hue.

Which J. Law hair shade is your favorite?

More like this
Why Sarah Jessica Parker Wanted Fans To Stop Calling Her Hair Choice “Brave”
By Brad Witter
Kim Kardashian Chopped Her Platinum Hair Into A Lob
By Olivia Rose Ferreiro
Regé-Jean Page On The Art Of Power Napping
By Paris Giles
The Secret To Taylor Swift’s Fringe, According To The Experts
By Orla Pentelow
Get Even More From Bustle — Sign Up For The Newsletter