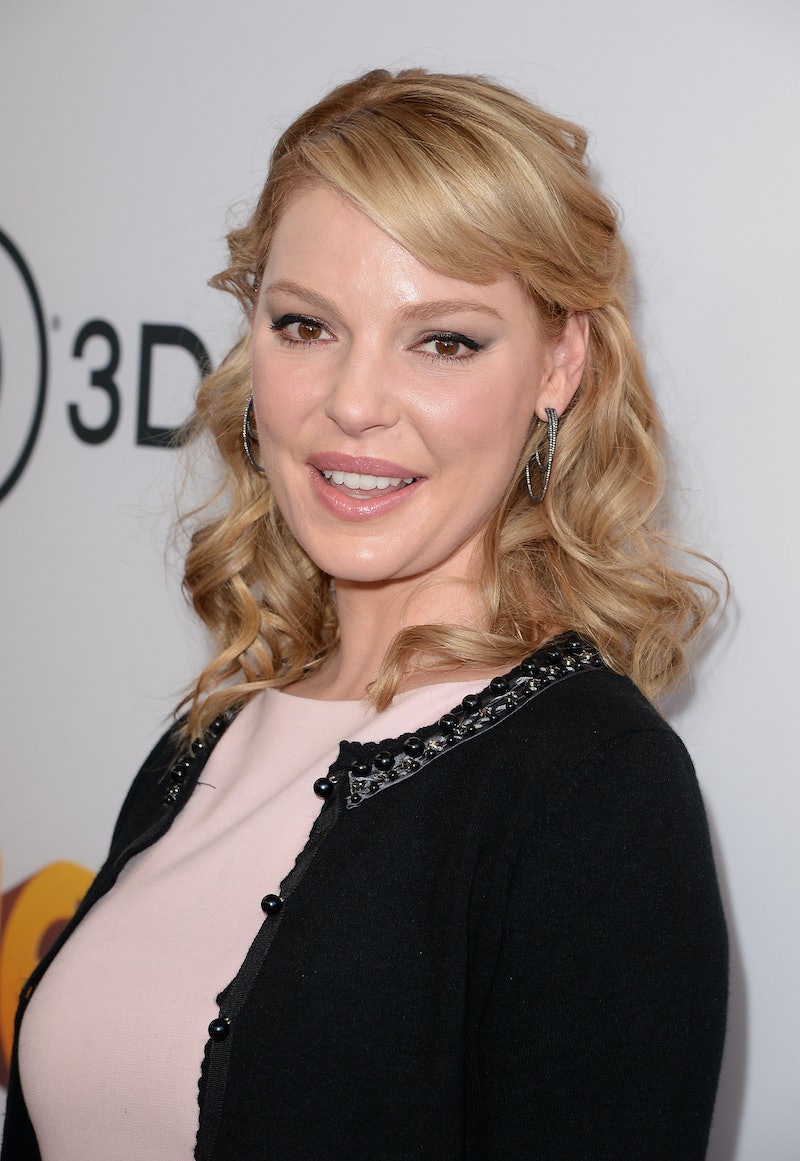 Remember Katherine Heigl, Grey's Anatomy actress and queen of the rom-com? Well, she's going to be in yet another movie about weddings, but this time, she won't be getting married to a freakishly handsome dude who has only pined for her from afar... she'll be getting married to a lovely lady. Heigl is starring in the film Jenny's Wedding as the titular character who shocks her conservative family by getting married to her female partner. The film is currently being crowdfunded on Indiegogo, which has currently raised $5,456 of its $150,000 goal.

It's an interesting turn from the woman who is essentially, the Barbie of Hollywood: a pretty blonde lady who plays a doctor/baker/television producer/sleepy NyQuil indulger with a handsome Ken by her side. Heigl is clearly making a bold move to expand her acting range, but when it's already difficult for LGBTQ actors to get roles, is it right for straight actors to take them on as a "challenge"?

Whether or not Heigl's movie is actually good, it's already the kind of movie that screams critical acclaim: indie movie, family drama, LGBTQ issues. And gay roles in critically acclaimed movies have overwhelmingly gone to straight actors — think Charlize Theron in Monster, Jim Carrey in I Love You Phillip Morris, or even take a look at this year's Golden Globes. It's not unprecedented. Jared Leto even tried to defend his performance as a trans woman in Dallas Buyers Club by saying that straight actors should be able to play LGBTQ roles just as LGBTQ actors should be able to play straight roles.

But Leto's argument doesn't change the fact that these actors can easily slip in and out of these roles with little harm to their reputation (in fact, they're usually awarded for it). It's one thing to play an eccentric character or someone with an intense struggle to be taken more seriously as an actor, but it's another to conveniently slip on someone's identity to further your career. For many people, the kind of family struggle that Heigl's character is caught in is an every day reality, and for a straight actor to try to represent LGBTQ voices for their own personal gain belittles the struggles of the people actually living that reality.

It's not that taking these roles in inherently wrong. But it's become a kind of trend for straight actors to play out the struggles of gay characters for critical acclaim, and it's one that needs to stop. Actors try to make a statement that they're somehow departing from "the norm" with roles like these, and that kind of message others the LGBTQ community and tells them that their experience is so far outside that of a straight person's experience, that it's hard work for a straight actor to try and portray it.

Sexuality shouldn't be treated as some sort of character quirk. It's an identity, and slipping it on for awards or even just to break out of being typecast takes away power from actual LGBTQ voices.

More like this
24 History-Making Black Women You Probably Didn't Learn About In School
By Ayana Lage and JR Thorpe
"Lavender Haze" Star Laith Ashley Breaks Down Filming With Taylor Swift
By Jake Viswanath
Ozzie’s Coming Out Scene With Kitty On 'That ’90s Show' Has Twitter Sobbing
By Brad Witter
'Knock At The Cabin' May Start Streaming Sooner Than You’d Think
By Jake Viswanath
Get Even More From Bustle — Sign Up For The Newsletter
From hair trends to relationship advice, our daily newsletter has everything you need to sound like a person who’s on TikTok, even if you aren’t.