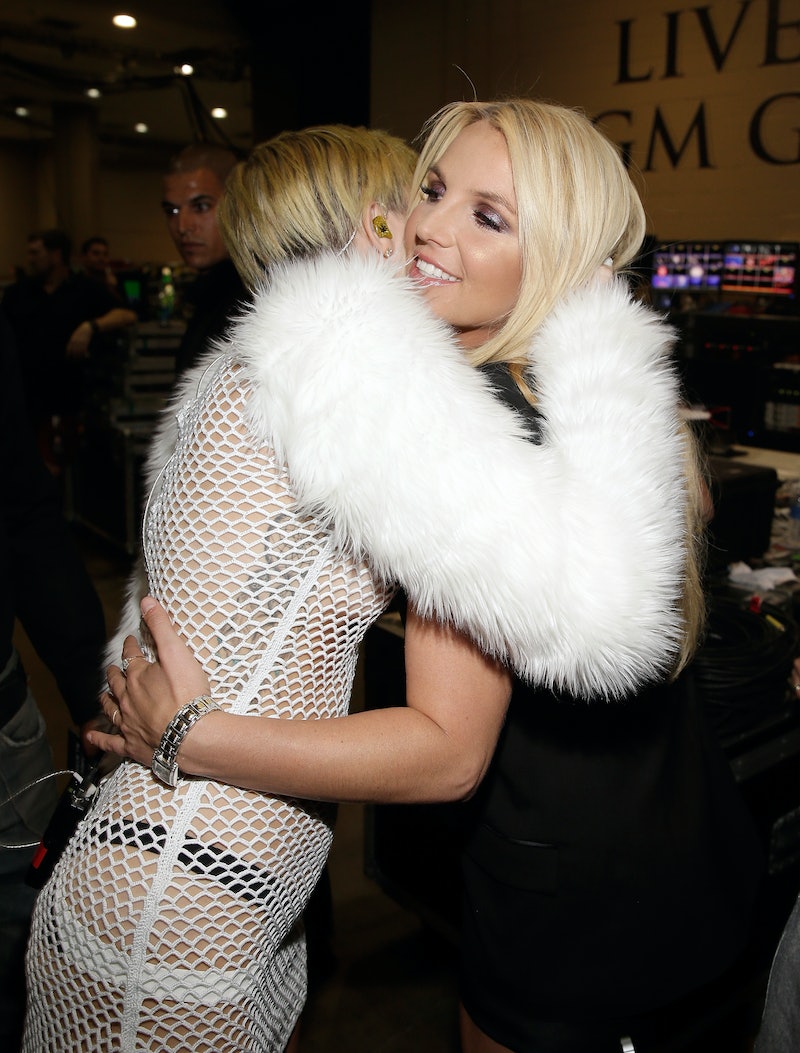 If I'm being completely honest here, Britney Spears has been everyone's #wcw (that's "woman crush Wednesday") at some point or another. She's been around since 1998, and in that time has always been considered one of the sexiest women alive. Especially these days with her bikini-clad, beachy selfies all over Instagram, it's not hard to imagine why everyone is still obsessed with the power of Spears. But who does Spears consider to be her very own #wcw? The answer might surprise you at first, but it actually makes a ton of sense.

Spears, who I consider to be the queen of Instagram for so many reasons, posted a photo of her #wcw, and it's none other than Miley Cyrus. Yep, Spears posted a photo of Cyrus in a yoga pose with the caption "Yes!! #goals #wcw." Cyrus has been working hard on her yoga practice, per her own snapshots on Instagram, so it's not surprising that Spears finds her progress inspiring. And it actually makes sense that the "Toxic" singer is sending some love to Cyrus, given that the two have a very long history together. It's true: the two Disney stars turned adult pop icons have plenty in common with each other.

The pop princesses have a bond that dates all the way back to 2009. It was August 9, 2009 to be exact, when a young Cyrus introduced Spears with The Ultimate Choice Award at the 2009 Teen Choice Awards. In her speech, Cyrus referred to Spears as her "hero," and it's so sweet to see a pop icon like Spears pass the torch in a way to Cyrus over the years.

Just two days later, Cyrus released her hit song "Party in the U.S.A.," and notably name called Spears out in the song's lyrics, singing, "That's when the DJ dropped my favorite tune / And the Britney song was on."

The two didn't publicly share another moment together until 2013, which was the year of Cyrus' infamous Video Music Awards performance. Prior to the performance, Cyrus signed Larry Rudolph as her manager, who had been Spears' manager since the beginning of her career. When Cyrus released her song "We Can't Stop" Spears praised it on Twitter, saying,

After Cyrus' controversial performance, Spears was quick to defend the young singer, telling Mario Lopez for Extra , "I remember that age when I was just transferring into my career and, like, doing more controversial things and the energy that you feel and all this chaos that goes on. [Cyrus] is on fire right now, she is on fire, she's just a ball full of energy."

The two also collaborated on a song for Cyrus' 2013 album, Bangerz, aptly called "SMS (Bangerz)," and they filmed one of their recording sessions for an MTV documentary about Cyrus called Miley: The Movement. Then, just a few months later on the opening night of her "Piece of Me" residency in Las Vegas, Cyrus showed up to support her friend. She even carried a backpack with a vintage photo of Spears all over it.

Cyrus showed more love for Spears by using a cutout photo of her head from her "...Baby One More Time" video in her Bangerz world tour.

Fast forward to 2015, and Spears and Cyrus meet again at an awards show; this time, the 2015 VMAs, which were hosted by Cyrus. Cyrus introduced Spears, who introduced the Best Male Video award, and the two showed off their cuteness yet again.

Finally, Cyrus sent Spears an amazing gift for her 34th birthday in December 2015, a display of massive silver balloons that spelled out "Britney," which Spears naturally shared on Instagram.

Given that both Spears and Cyrus had a similar career trajectory, first as Disney stars, and then growing up in front of the entire world, it's so sweet that they lean on each other and support one another in all of their projects. I can't be the only one who wishes for a joint Spears/Cyrus world tour, right? Or at least a new song together... please!