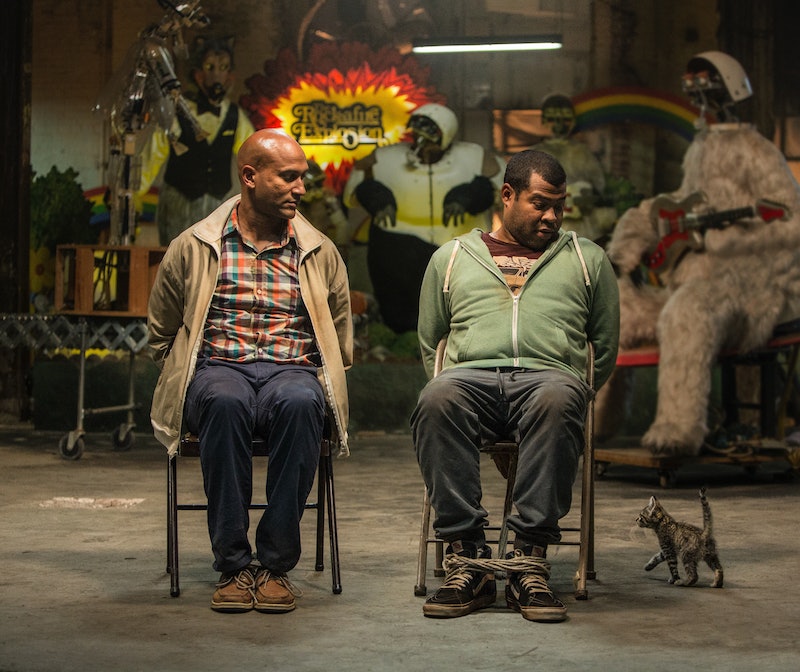 While the soundtrack of a film is an important element in any project, it's something that Keegan-Michael Key and Jordan Peele's upcoming film, Keanu , takes extra seriously. When I had the opportunity to visit the New Orleans set of the film back in July 2015, the importance of music in the film was the first thing that became apparent — and not just because one of the first things I saw when I stepped outside was star/rapper Method Man singing Billy Joel to himself between takes. In fact, it's perhaps even more important than the fact that the movie stars an adorable kitten — after all, entire scenes are built around George Michael songs that Key's character, Clarence, loves. Choosing the correct artist and songs to build scenes around — like George Michael, for instance — may sound easy, but it's actually one of the most difficult decisions for a filmmaker.

When I asked director Peter Atencio and stars Key and Peele specifically about the George Michael pick, they revealed the song choice process was... well, just that — a process. "There were some discussions. But I’ll tell you this — we ended up with the best case scenario," Key reveals.

"Once it worked out and it happened, it was like, ‘Oh, that’s how it was always meant to be,'" Atencio adds.

Peele agrees. "It just clicked... when we got George Michael to say 'yes,' it was this amazing moment, because you realize you’ve just gone from a question mark to what you know is a soundtrack that everybody [will love]."

And George Michael is quite integral to the film. Choosing any artist wouldn't have worked for the film. According to Atencio, it needed to be someone who was beloved enough, but also power pop enough, to sound ridiculous for certain scenes. "There’s a scene where [Key's character, Clarence, and the gangsters] all listen to George Michael for the first time, and by the end, they’re all singing 'One More Try' together. It’s awesome."

Part of Clarence’s character is that he likes really — pardon the term — he likes really white music. As so many of us. And George Michael is an example of very white music that is also very awesome and very good, and so we wanted to give Clarence something that he had to justify to the gang, why he’s listening to this music, but also something that would make an awesome soundtrack." He pauses, before adding, "And you forget — you forget. [It makes you go, like,] 'oh, George Michael is a badass!'

As for what sort of "discussions" Key is referring to — well, this is where it gets interesting, and you can thank one of the film's stars, Luis Guzman, for that. It's not every day you're interviewing two comedians and a director about their film only to have Guzman stroll up and start asking questions about George Michael — but it is some days, apparently, because that's exactly what happened next. When Atencio was discussing the movie's soundtrack having become his life's soundtrack, Guzman suddenly asked, "You still have the Paul Simon thing in?"

Simon, apparently, was the artist whose music was chosen for the film before Michael's music was settled on. Atencio and Peele list off the Simon songs that nearly made the cut — "'Diamonds on the Sole Of Her Shoes," "The Boy In the Bubble…," and, according to Peele, "'Graceland' itself, maybe," — before Guzman questions which George Michael songs made it into the movie. Atencio quickly clarifies, saying, "George Michael? 'Freedom 90,' 'Father Figure,' 'One More Try,' and 'Faith,'" before the songs' importance — and badassery — is reiterated.

And sure enough, after revisiting these classic songs, they are pretty badass, and perfectly fitting... for a movie about a kitten.

More like this
Adam Lambert Called Out The George Michael Biopic Over Potential Casting
By Sam Ramsden
The Jonas Brothers' New Album Has A Very Meta Name
By Alyssa Lapid
This Girls Aloud x Sugababes Collab Still Hits All The Right Notes
By Sophie McEvoy
The Spice Girls Are Set To Reunite At King Charles III’s Coronation
By Sam Ramsden
Get Even More From Bustle — Sign Up For The Newsletter
From hair trends to relationship advice, our daily newsletter has everything you need to sound like a person who’s on TikTok, even if you aren’t.