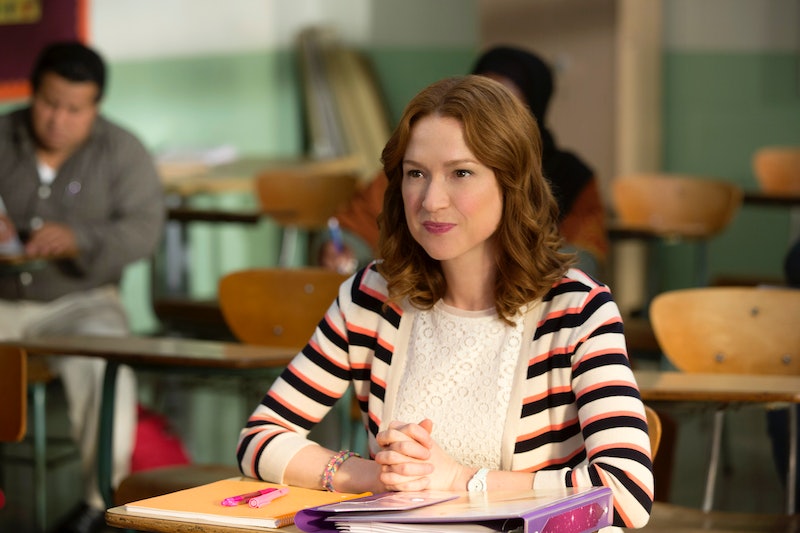 At long last, Unbreakable Kimmy Schmidt Season 2 is here! Not only is the comedy series totally goofy and hilarious, but it's also totally feminist. In addition to all of its quotable jokes, I've compiled some of the most empowering quotes from Unbreakable Kimmy Schmidt from Seasons 1 and 2. The first season of the show included so many unforgettable and poignant GIF-able scenes and moments, as well as hilarious catchphrases, including "hashbrown no filter," and the second season was just as good.

Unbreakable Kimmy Schmidt's first season opened with the title character (played by Ellie Kemper) getting rescued from a bunker after being held in captivity in there by a madman throughout her teens and 20s. Once freed, she decided to start a new life in New York City, where she's not known as an "Indiana mole woman." Kimmy encountered many other funny, but distinct characters who are also searching for the freedom to be themselves in a great big world. Her boss Jacqueline (Jane Krakowski) was trying to reconnect with her Native American past, while Kimmy's roommate Titus explored his sexuality and acting career in the Big Apple.

Relive some of Unbreakable Kimmy Schmidt Season 1 and 2's most empowering quotes below, said by Kimmy herself.

1. "You Can Either Curl Up In A Ball And Die, Like We Thought Cyndee Did That Time, Or You Can Stand Up And Say, 'We’re Different. We’re The Strong Ones, And You Can’t Break Us.'"

Kimmy declared this to Titus early on in the series.

2. "We’re Just Covering Up Our Problems. In Order To Fix Ourselves, We Have To Start Right Here. Find That Small Unbreakable You Inside Yourself."

3. "You Get To Live Your Life The Way You Want. That’s The Whole Point Of Not Being In A Bunker. No One Gets To Tell You What To Do."

You gotta do you. Especially since you're not living in a bunker.

4. "But I Survived, Because That’s What Women Do. We Eat A Bag Of Dirt, Pass It In A Kiddie Pool, And Move On."

Kimmy didn't mean the second part as a metaphor in the series (yikes), but in real life we can think of it that way.

5. "Yeah, The Monkey Was A Woman. Women Can Be Anything These Days."

6. "Well, This Is It. I Feel Like A Butterfly Bursting From Its Chrysalis And Falling From The Nest!"

That may not be scientifically accurate, but it's the empowering intention that counts.

7. "Why Do We Keep Doing This To Ourselves? Replacing One Stupid Male Authority Figure With Another? Like Days Of Our Lives Replaces Roman Bradys."

Kimmy stands up to her cult-like spin instructor with this rousing speech with a shoutout to the long-running NBC soap.

8. "I Still Believe The World Is Good. That Bunnies Are Nice And Snakes Are Mean. That One Day Sandra Bullock Will Find Someone Who Deserves Her."

Kimmy tells Jacqueline this during her divorce, but we should all take this advice. So true, Kimmy Schmidt.

10. "Happy People Value Their Needs As Much As Others."

11. "Am I The Only Person In This City Who Doesn't Just Do Whatevs Whenevs? Fudge It To Heck, Where A Demon With A Thousand Wee-wees Fudges It Forever!"

This insult is everything.

12. “If Anything Can Remind Me What’s Good And Right In The World It’s This Place!”

Kimmy says this about the Christmas store she gets a job at in Season 2. I love her eternal optimism.

13. “Anonymous Insults Are Never Funny, Except When You Write ‘Wash Me’ On A Car. That’s Just Funny, ‘cause It’s Like, Is It The Car Saying It?”

True and with a funny joke thrown in. That's our Kimmy.

14. “I Can’t Give Up On Stuff. I Still Want Nickelodeon To Take Over My School.”