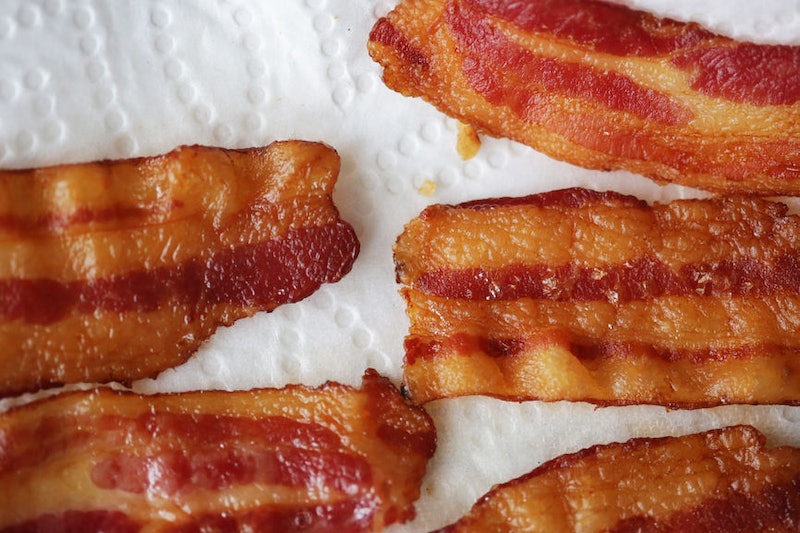 Bacon, as should be evident to anyone who has ever tried it, is delicious. But while you might think we're all on the same page there, it seems some people love bacon more than others. The new 50 States of Bacon map from Ginny's reveals which states love bacon the most and which states seem curiously uninterested — at least from what we can tell on Instagram. So if you live in a state where bacon is highly popular, congratulations, your state has good taste! And if not...well, more bacon for you I guess, since clearly no one else around you is eating it.

In order to create their map, Ginny's looked at how many Instagram posts from each state were tagged as #bacon, and compared that to the total number of posts tagged as #food, #breakfast, #lunch, or #dinner. They found the national bacon to food-in-general ratio, and then compared each state's breakdown to the overall number. It's not the most scientifically exact way to figure out which state loves bacon the most, but it is a good way to see how much a state expresses that love on social media.

And in addition to telling us all how sensible our state is about the excellence of bacon, it also provides a bacon fun fact for each state. For example, Kansas, despite being 26 percent below the national average, is the birthplace of the Bacon Explosion, which is made from bacon, sausage, and barbecue sauce. Meanwhile, in Oklahoma there exists such a thing as bacon wrapped popcorn. They should really put that in their tourism commercials.

So what are some of the states with the most love of bacon? The least? Where here's the good, the bad, and the average.

Maybe Georgia is too distracted by peaches to properly obsess over bacon. They're exactly at the national average level for bacon appreciation.

Hawaii is a shocking 48 percent below the national average for love of bacon. Are they too busy eating fruit?

Nebraska is a whopping 132 percent over the national average. They clearly have their priorities in order.

So where does your state rank? Find out below: