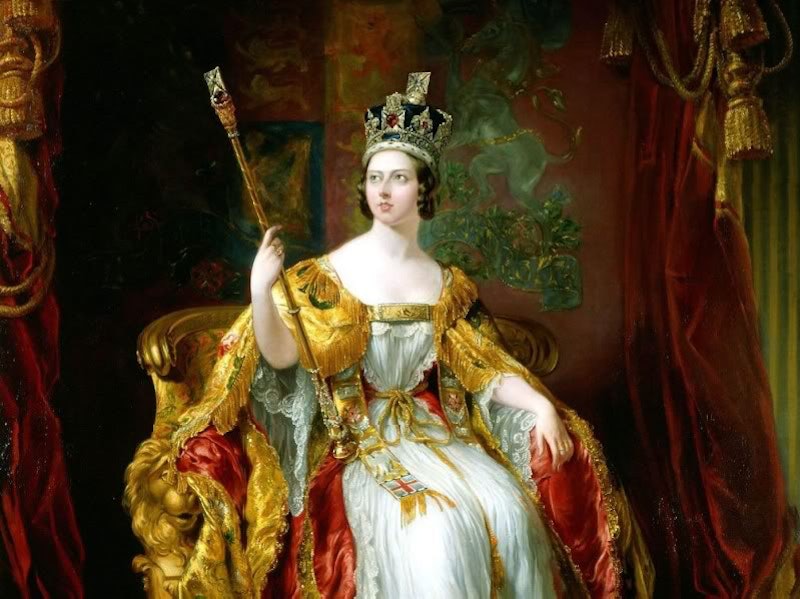 If you want to spend 4/20 absorbing awesome history as well as potent smoke, it turns out that there are some exceptional women in history who've partaken in or been involved with cannabis in some way. We often depict drug-taking in history as all male, from Thomas de Quincey's Confessions Of An English Opium-Eater to the possibly laudanum-induced poems of Samuel Coleridge (read "Kubla Khan" and tell me that's the product of a sober mind). But women were part of it too; partaking, experimenting, finding medical uses, and fleshing out the history of marijuana to be an all-gendered affair.

If you're at all interested in the crossover between women's history and marijuana use, you should check out Tokin' Women, a blog (and now book!) about the many famous and powerful women throughout human history who had relationships with cannabis, from actively promoting its use as a crop for making rope (take a bow, Queen Elizabeth I of England, who mandated that English crop-growers had to devote a portion of their land to hemp) to taking it for pleasure or pain relief. The author, Ellen Komp, can trace the use of cannabinoids in women's history from ancient Sumeria to the ancestors of Kate Middleton.

So, in honor of this most sacred of cannabis holidays, here are some of the most notable pot users in women's history, from a medieval medical genius to ancient Egyptian royalty.

The author of Little Women and its sequels wrote some very interesting short pieces about hashish that indicate she may have partaken at some point, and not found the experience at all distasteful. A story called "Perilous Play" involves two would-be lovers getting high, getting lost in a boat, and inexplicably ending up engaged. In it, Alcott describes them as "that Indian stuff which brings one fantastic visions," and has one character explain the effects to another:

“A heavenly dreaminess comes over one, in which they move as if on air. Everything is calm and lovely to them: no pain, no care, no fear of anything, and while it lasts one feels like an angel half asleep.”

Notably, the story ends with the line, "Heaven bless hashish, if its dreams end like this!" In another, "A Modern Mephistopheles,"Alcott's heroine (hilariously called Gladys) takes a hashish candy and finds that "an inward excitement possessed her, a wild desire to sing her very heart out came over her, and a strange chill which she thought a vague presentiment of coming ill, crept through her blood." So possibly Alcott herself was a bit ambivalent about the positives of cannabis, but it definitely seems to have influenced her.

One of the most celebrated authors and poets of the 20th century, period, Maya Angelou had a lot to say for herself, and wasn't going to keep quiet when it came to her life experiences with marijuana. As it turned out, she'd had a long relationship with it in her earlier years, and documented it extensively in her second autobiography, Gather Together In My Name. Of her first experience at a dinner party, she recalled,

"The food was the best I'd ever tasted. Every morsel was an experience of sheer delight. I lost myself in a haze of sensual pleasure, enjoying not only the tastes but the feel of the food in my mouth, the smells, and the sound of my jaws chewing."

When it came to "Mary Jane, hash, grass, gauge, weed, pot," she had "absolutely no fear," and recounted everything from dinner with her mother to long walks while high.

If you've never heard of Hildegard von Bingen, I cannot emphasize how awesome she was. She was a Benedictine abbess and polymath in 12th century Germany who experienced visions, composed astonishing music and plays, and wrote about everything from natural philosophy to theology to medicine. (I kind of want to grow up to be her.) And it turns out that she thought hemp had a significant role to play in the medical landscape.

In her medical work Physica, she discusses hemp's potential medical applications, how it grows, and recommends various uses: "whoever has an empty brain and head pains may eat it and the head pains will be reduced," for instance, and "a towel prepared out of hemp laid upon sores and wounds works well since warmth is contained within it." The healing idea of hemp cloth actually persisted in female-based medicine for centuries in medieval Europe; a law for midwives from 1480 advises that, for Caesarian sections, the mother should be bandaged with "a plaster made of three eggs, hemp cloth and Armenian earth" after the operation.

This is one of the most fascinating episodes in the history of medical marijuana: Queen Victoria, that symbol of prudishness and conservatism (even if she doesn't deserve the reputation), may have been given cannabis as a method of relieving her menstrual cramps. Her private doctor, and source of the cannabis, was Sir J. Russell Reynolds, who wrote in 1890 that "when pure and administered carefully, [cannabis] is one of the most valuable medicines we possess."

It's thought that she wasn't lighting up, though: Reynolds, it seems, may have prescribed her tincture of cannabis, liquid concentrations of the drug that were the most common way of administering it (and many other things) at the time. Tinctures of cannabis are actually experiencing a renaissance in medical cannabis centers and states where weed is legal. It's administered via dropper under the tongue, and only requires a very small amount to feel the affects. We can only hope it helped Victoria out of her difficulties.

The influential American anthropologist Margaret Mead endured a brief press firestorm as a "dope fiend" in 1969, because she told the American Senate it should be legalized. Part of her testimony, which includes reflections on other societies that used cannabis and worries about it as a "gateway drug," was the powerful statement:

"It is my considered opinion that at present that marihuana is not harmful unless it is taken in enormous and excessive amounts. I believe that we are damaging this country, damaging our law, our whole law enforcement situation, damaging the trust between the older people and younger people by its prohibition, and this is far more serious than any damage that might be done to a few overusers, because you can get damage from any kind of overuse."

The outrage was predictable and frankly a bit hilarious: the author of Lil Abner made out that she'd advocated heroin for children, while the governor of Florida famously called her a "dirty old woman".

Though her real name was Karen Blixen, you're more likely to know the author's pen name, Isak Dinensen. She was played by Meryl Streep in Out Of Africa, and the Danish author's memoir of her life on a coffee plantation in Kenya in the early 20th century is a modern classic, and it looks as if marijuana was a part of her arsenal of imagination.

In her book, Tokin' Women: A 4,000 Year Herstory of Women And Marijuana , Komp details an episode from a biography of Dinensen where she and companions "experiment with the sensations hashish, opium, or miraa could give them," and in which Dinensen told stories sitting on the ground and, presumably, flying very high indeed.

We don't know this for sure, but based on the evidence, we can guess that the ancient Egyptian pharaoh Hatshepsut may have encountered cannabis as medicine. The Ebers Papyrus (around 1550 BC) that details the use of cannabis for gynecology was produced slightly before Hatshepsut took the throne (she lived from around 1508 to 1458 BC), and it's not out of the question that she took its advice. (Yep, that's Hatshepsut with the beard above, as a sphinx; she showed herself with a fake beard in a lot of her images, to convey her authority.) And other Egyptian women, including those at the top of society, would likely have known about it too.

The Ebers Papyrus mentions cannabis as an aid for childbirth, advising that it's ground into honey and inserted into the vagina. According to Didier Lambert's Cannabinoids In Nature And Medicine, scholars now agree that what the Egyptians called shemshemet was definitely cannabis, and it was used for a variety of medicinal uses, including being taken by mouth and "fumigation". For ancient Egyptian women giving birth, though, a honey-weed pessary seemed like a decent option; and earlier this year, the idea was borrowed by Foria, who released a cannabis-infused vaginal capsule to help women with severe menstrual pain.

So now you've got some serious knowledge to throw around at your 4/20 gathering, while everybody's chilling and indulging in what we now know is a habit that's lasted thousands of years.

More like this
10 Must-Read New Books Out This Week
By K.W. Colyard
The Most Anticipated Books Of August 2022
By K.W. Colyard
Why Experts Say Sleeping With A Fan On Isn’t Totally Risk-Free
By Sophie McEvoy
The 5 Best Sand Flea Repellents For Bite-Free Living
By Elizabeth Enochs
Get Even More From Bustle — Sign Up For The Newsletter