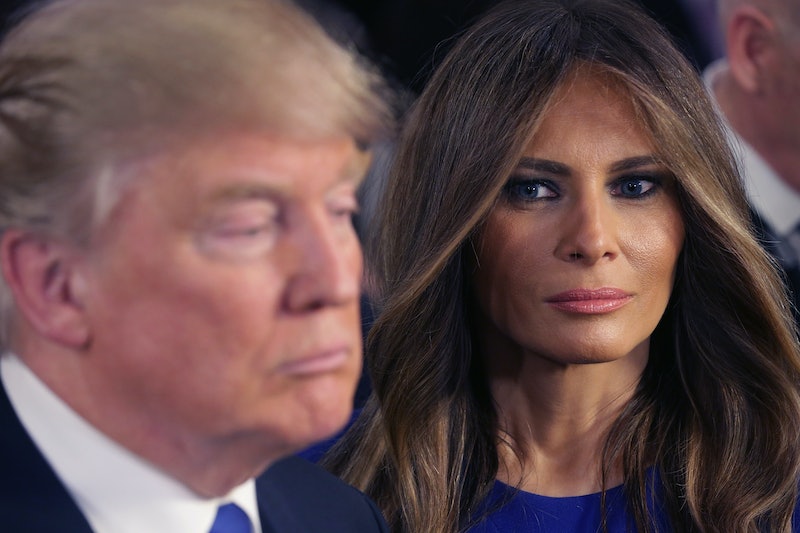 “I will be the best thing that ever happened to women,” GOP presidential front-runner Donald Trump bragged back in August. Given the frequency of his sexist outbursts and missteps since then, women have good reason to be skeptical of Trump's claim — and a March 2016 Gallup poll shows that they are: Seven in 10 women have an unfavorable opinion of Trump. According to a September 2015 analysis of Gallup polling data, up until that point, Trump's gains among Republicans had all come from men. So, who are the women who would still vote for Trump?

April Masini, a New York-based author and relationship expert, is backing Trump for what she describes as pragmatic reasons: “I do not believe there is a single career politician who can begin to compete with Trump when it comes to the economy or resolving the debt crisis,” she tells Bustle in an email. “And, when all is said and done, if the United States is broke, nothing else matters.”

When I bring up Trump’s remarks about women, Masini is unfazed:

“I believe 100 percent that Trump is pro-woman — a man who sees women as equals, fully capable of handling anything and everything just as well as (if not better) than a man.”

Masini tells me that she likes that Trump is “a fighter … If a woman attacks him, he fights back against her the same way he fights back against a man, because to him she is just as strong and just as capable as any man." In fact, Masini says this quality in Trump "makes [him] the ultimate feminist — he treats men and women equally.”

Carole Lieberman, a psychiatrist who currently practices in California, tells Bustle in an email that “the media has totally blown Trump’s feelings for women out of proportion. He is not a woman-hater." Her proof? "His daughters have grown up to be wonderful women, which they couldn’t have done if he was a bad dad.” Trump himself has repeatedly proffered his daughters, Ivanka and Tiffany, as examples of strong, successful women and evidence that he is a champion of women.

His daughters have promoted this narrative, as well. Ivanka defended her father at a CNN town hall in response to a question about Donald’s woman problem:

I’ve witnessed these incredible female role models that he’s employed in the highest executive positions at the Trump organization my entire life … the way he raised me, the way he raised Tiffany, it’s a testament to the fact that he believes in inspiring women, empowering women ... His actions speaker louder than the words of many politicians who talk about gender equality but it’s not evidenced in their daily employment practices.

Carol Bloom Stevens, a publicist who co-owns a marketing firm with her husband in New York, also says she supports Trump because his business record should be proof that he will not be bad for women. Stevens tells Bustle in an email that Trump “is the only one who has ever built a company and hired people. I truly believe that he will be a leader who will treat men and women equally. Just look at his family. Ivanka is running the company.”

As a businesswoman herself, she is (perhaps over-)confident that women can achieve great things on their own, without government support. “Women can do anything they want today if they aim high and don’t let anyone stand in their way!” A nice thought for those lucky enough to have no barriers between them and access to health care, child care, an education, or a decent job.

Masini and Lieberman also share a distaste for Ted Cruz. Lieberman describes the Texas senator as “a conniving fox in sheep’s clothing,” and Masini says she's actually far more bothered by Cruz's views on abortion than Trump's, describing Cruz’s opposition to abortion under any circumstance as “anti-woman.” She doesn't mention Trump's recent remark about punishing women who seek illegal abortions, possibly because he walked it back.

Marcia Noyes, who works as a director of communications for a health care technology company and lives in Texas, tells Bustle in an email she admires Trump as a businessman and likes that he is “an anti-establishment candidate." Supporting him is about sticking it to both parties: "It's about time someone put the Republicans and Democrats in their place,” Noyes says. While she admits to some reservations about his “antics and approach to other people," she thinks “eventually he’d temper his bombastic ways and become more presidential.”

Interestingly, Noyes tells me that although she claims she’s not a feminist, “my friends tell me I am. I support equal pay, women's right to choose, and gay rights for both men and women.” (Sounds like a feminist to me!) Moreover, she insists that these issues won't solely determine who gets her vote. "I won't choose to support a president on ONE issue," she tells Bustle. "The most important thing to me is which candidate can move the economic needle forward and best protect the country.”

Like Noyes, Susan Munro does not call herself a feminist but holds some views that fit with the current feminist movement. Munro, a scheduler and mother of four who lives in Louisiana, tells Bustle she is “for women’s rights” and “doesn't agree [with Trump] on abortion.” While she tells me she supports paid family leave and reproductive rights issues hold importance to her, Munro doesn't feel abortion access for women is threatened. “Roe vs. Wade will never be overturned because of who's on the Court now,” she tells Bustle, “and anyway that's not going to influence my vote in the next eight years.”

Munro is particularly concerned about health care costs and disturbed by the gutting of the American middle class. “I believe a revolution is coming,” she says. “The middle class is speaking up and speaking out.”

In fact, her support for Trump is driven by her (entirely understandable, in my view) anti-establishment anger. Munro says Trump’s main selling point is that he is not a politician.

“I want him to go in there and blow up the Republican party,” Munro tells me. “That’s why I’m voting for him. We’re [done] listening to who they want us to listen to. They haven’t given us a good candidate in 20 years.”

That's not so unlike those of us who are feeling the Bern.

From my experience talking to these women, Trump lovers aren’t necessarily hard-liners on abortion — even the women who describe themselves as “pro-life” repeatedly characterize abortion as a choice — and many of them stress they support women’s rights, including equal pay and family leave. What's abundantly clear is that these women are sick of being screwed over or ignored by party elites and hungry for someone who will speak out against the status quo in politics. That frustration is enough to explain Trump’s appeal, even to women who disagree with him on a number of issues.