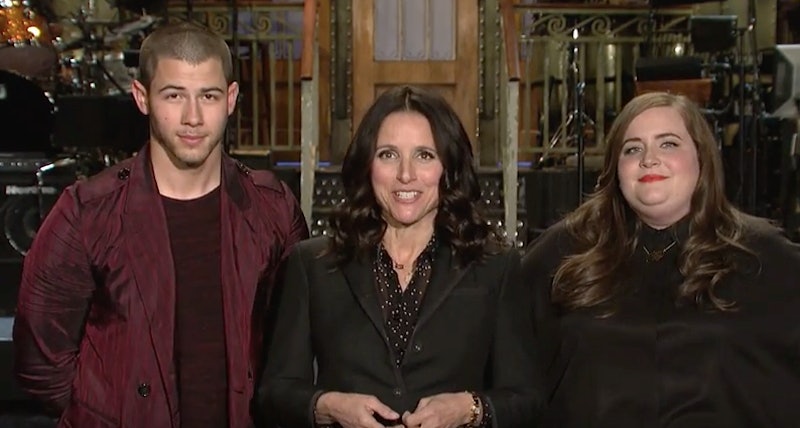 You know those videos of unlikely animal friendships, where, like, a dog and an elephant are best friends, but you never would have predicted it until you saw it, but then it's a perfect match? That's how I feel watching the new Saturday Night Live promos with Nick Jonas and Julia Louis-Dreyfus. And please don't get me wrong, I'm not saying either one is the elephant to the other's dog — just that when I saw the two of them interacting onscreen, I was unexpectedly like, "Oh yes, more of this please, yes." So, it's good news that Louis-Dreyfus is the host and Nick Jonas is the musical guest for SNL's Apr. 16 episode — there's totally the possibility of seeing them together on screen a little more. Honestly, while Louis-Dreyfus clearly needs no help hosting, as she is not only absurdly talented but also a former cast member herself, I'm surprised at how much the promo makes me want to see Jonas hop into a few sketches.

Jonas just is such a calm, confident foil for the hilarious energies that Aidy Bryant and Louis-Dreyfus are bringing to this video that I really want to see more. He just stands there through the first promo, smoldering gently while Louis-Dreyfus and Bryant carry the day, but he gets more involved in the second two: First when Bryant warns Louis-Dreyfus away from Jonas because "he already says he loves me and that I'm his wife," and he responds with the fact that all he said was "hi." It's a simple line, but his timing is perfect, and he's so at ease in front of the camera, I love it. Watch it for yourself and just try to tell me I'm wrong.

See what I mean? Don't you totally want some Nick Jonas in all those SNL sketches come Saturday? This promo more than proves that dude can hang.

More like this
The First Trailer For 'That '90s Show' Includes So Many Nods To The Original Series
By Jack Irvin, Alyssa Lapid and Grace Wehniainen
Elizabeth Debicki On Her Approach To The Most Debated Scene From 'The Crown'
By Grace Wehniainen
Another 'Sex Education' Star Has Joined The 'Doctor Who' Franchise
By Darshita Goyal
Courteney Cox Recreated An Iconic 'Friends' Scene To Surprise Fans
By El Hunt
Get Even More From Bustle — Sign Up For The Newsletter