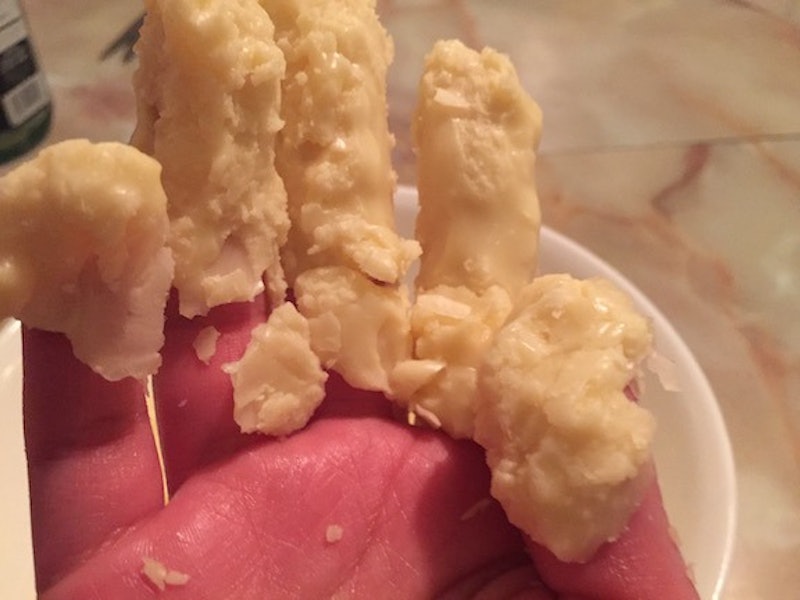 I’m a candle person. On any given day I have at least one candle burning in my room, while also online shopping for more to add to my ever-growing collection. That is how I stumbled upon a candle that doubles as a moisturizer. I had never seen such a thing in my entire candle-loving life, so I was quickly curious to see if more things like this existed. This crazy, yet awesome product led me to an experiment I had to try out for myself: a DIY candle as moisturizer experiment that included playing with wax.

Those of you that have ever played with candles know how satisfying it feels to dip your fingertips in the melted wax and then peel it off once its cooled. To be honest, I still do this from time to time, but had never noticed how soft my fingertips would be after doing this repeatedly. This DIY takes that basic concept and applies it to your whole hand in order to leave it baby soft and smooth for an extended period of time. Of course, this doesn’t replace traditional moisturizer, but is more of a luxury spa kind of deal. The only difference is that you’re doing it to yourself (or with friends) and it won’t cost you tons of money.

When I watched videos of people using candle wax as a moisturizer or manicure, I saw that the steps were almost the same as for making those awesome looking wax hands. A person would first wash their hands before applying some kind of oil-based substance. Then they would proceed to dip their entire hand repeatedly into some wax (which was at a cooled temperature) until thickly covered.

The only problem was the use of paraffin.

To keep it simple, paraffin is made up of a lot of ingredients — some of which aren’t great for us to burn or have on our skin. I’m not usually one to care so much about all of the ingredients in my beauty products, but have started to notice that my skin is more sensitive. This is why I chose to use beeswax instead of the traditional paraffin that is often used for these wax hand baths. I didn’t want to have paraffin sitting on my skin for a long time, and beeswax is equally as great without the use of chemicals.

After learning what paraffin baths were, I found out that companies actually make sets for people to easily do them at home. The average cost of these are around $35, but I figured a true DIY means making the mess with as much at-home products as possible.

In order for me to see if this DIY was effective, I decided to focus on my fingers because they are the part of my hand that dries out the most from working with paper all day. For the purpose of the photos, I kept it consistent by photographing my right hand throughout the entire process from before, directly after, and 24 hours later.

I began by setting up my makeshift double boiler with a small pot filled with water and my greased heat-resistant bowl on top. Then I cut a piece of my beeswax and placed it in bowl for it to melt. I also used around one tbsp of jojoba oil. This took about 15 minutes with the large chunk of beeswax, but when I made the pieces smaller it reduced the time a little bit. I made sure that the amount used would be enough for what I intended to cover, but I would have used a lot more if I wanted to submerge my whole hand.

Once the beeswax was melted, I removed it from the boiler and let it sit to cool. It’s not recommended to dip your hand or fingers in right after the wax has melted because it will burn your skin and no one wants that. Most websites suggested waiting until a layer of skin developed on the top of the wax, or (if you have a thermometer) when the temperature reaches 125˚F.

While the wax is cooling, I washed my hands to make sure they were completely clean and then applied jojoba oil all over the hand that would be submerged. This would help when removing the wax, as well as helping to moisturize the skin at the same time. By the time I prepped my station with everything I would need after my fingers were waxed (plastic bag and oven mitt), the wax had cooled enough and I was ready to dip.

Attempting to photograph and dip my fingers carefully resulted in some strange looking lumps in my pictures, but it doesn’t exactly matter how my hands look afterwards so much as if they are completely covered in a thick enough layer of wax. It took me around five times to get the thickness I desired, but this was because beeswax is not as thin as paraffin. I dipped my finger in and out quickly and waited for the wax to harden between each dip. This made sure I had a good amount of wax on my fingers by the end.

Afterwards, I placed my hand in the sandwich bag and then in the oven mitt to stay warm. It is recommended that the wax sits on your skin for about 20 to 30 minutes. I left it on for approximately the length of a Bob’s Burgers episode before removing the wax carefully.

Unlike the videos where the people use a towel, I simply peeled it off to enjoy my favorite part about playing with wax. Afterwards, I cleaned up any remaining wax on my fingers before applying a small amount of jojoba oil for added moisturizer. Finally, I disposed of the wax I had used for hygienic purposes, as you don’t really want to reuse it again just in case.

I did this DIY experiment four times. Although I only recorded photos of my second trial (because I was doing this alone), all of them had the same results. Directly after the wax bath, my fingers felt amazing! They not only smelled wonderful, but also felt very smooth and nourished. I expected them to have a weird texture from the wax, but applying the jojoba oil helped lessen this sensation a lot.

I was also surprised to see how much better my cuticles and skin looked around my nails. The before photo made my fingers look absolutely hideous, but the hand treatment completely reversed this effect tenfold. It looked like my hands were brand-new and my nail beds not as sad and dry as they had been half an hour ago.

I had done all my trials at night to see how they lasted through sleeping and from day-to-day activities. When I woke up, I saw that my fingers still looked very moisturized in comparison to my other hand that did not get the treatment. Although they didn’t feel as soft as the night before, they did not feel dry either. However, as I went through the day washing my hands, working with paper, I noticed that they were starting to feel like they usually did whenever I forgot to wear moisturizer. I did apply some hand lotion, but by the end of the night my hands looked as if they were headed towards the state they had been before the treatments.

I wasn’t expecting the treatment to last for days, but the fact that they held up almost 24 hours was better than I thought. It could be possible that using paraffin wax might help prolong the moisturizing effects, but I have no regrets using the beeswax. All my trials left my hands feeling amazing. I even gave myself some hand massages, which eased the tension I had built up from stress.

Even having my hand sitting in the oven mitt was oddly enjoyable. With the wax on my fingers and in a plastic bag, the oven mitt kept my hand very warm and comfortable that I honestly did not want to take it out sometimes. I could have stayed there for an hour without any desperation to take off the wax coatings.

I would love to try this experiment with soy to see if it could make the moisturizing qualities last longer, or even a mixture of beeswax and soy. I know I will be doing this again, and I will definitely be having some get-togethers for others to try this relaxing hand bath. If you ever want to try a relaxing DIY group spa idea, this one should be next on your list. And maybe those soy moisturizing candles, too!