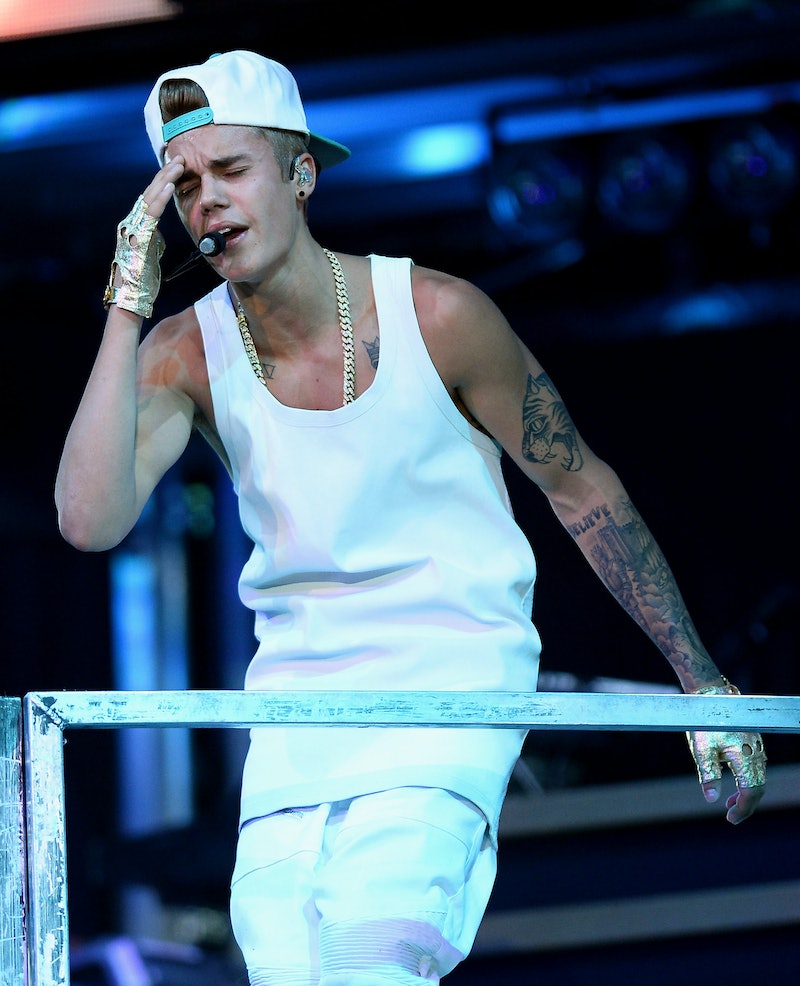 It says pretty much everything that there's now video of Justin Bieber pissing in a mop bucket while his friends cheer. It goes to show he's just like the rest of us — he gets wild 'n crazy with his buds and then goes out and pees in public because that's what cool kids do, right?

Except not at all. In Bieb's continued marathon of unbridled douchery, this takes the cake. Is there anything even a little cool about antagonizing people in the service industry? Some poor waiter or waitress with an hourly wage will have to clean it up. It's like Bieber is trying to make himself into Chris Brown — always an attractive look when your fan base is largely preteen girls and awkward middle-aged men.

There is so much going on in this 45-second video, it feels like it needs a formal breakdown.

1) Bieber is wearing the ugliest pants known to man. Like, who even knew those were still manufactured post 1998?

2) His friend/narrator of this pee break talks like he thinks he's Will Smith from The Fresh Prince of Bel-Air.

3) Bieber is also peeing in a bucket. The best part is when you notice that there's the manager of the restaurant clearly standing there with no idea what to do while Bieber's friends justify his reasons for peeing in a bucket, saying, "You're not gonna remember him pissing in the restroom." Probably not, but then again, we rarely try and immortalize urinating, even when celebrities do it. Although, having said that, this dude could probably make a fortune selling Bieber's pee on Ebay. There are a lot of sick people out there.

4) Then there's the part where Bieber throws cleaning solution at a poster of Bill Clinton while saying, "F*ck Bill Clinton." And his friends laugh. What? How Clinton plays into any of this is unclear, but the point is that in less than a minute, we've watched a 19-year-old break the seal into a bucket while his friends look on and then insult an ex-president. Which is confusing so close to our patriotic July 4 holiday and also can't be unseen.

5) After that, they run up the stairs squealing, "We're the Wild Kids," like this is some weird NSFW music video instead of an act of useless vandalism. Biebs, you're not a Beastie Boy and no one is impressed by your inability to make it to a bathroom. Incontinence does not a pop-star make.

Yeah. Just imagine all the unspeakable horrors we'd have experienced if this video were any longer. Two more minutes and we'd have probably been watching Bieber's crew kidnap Dustin Diamond or punt babies into dumpsters. These Wild Kids clearly need a time-out.