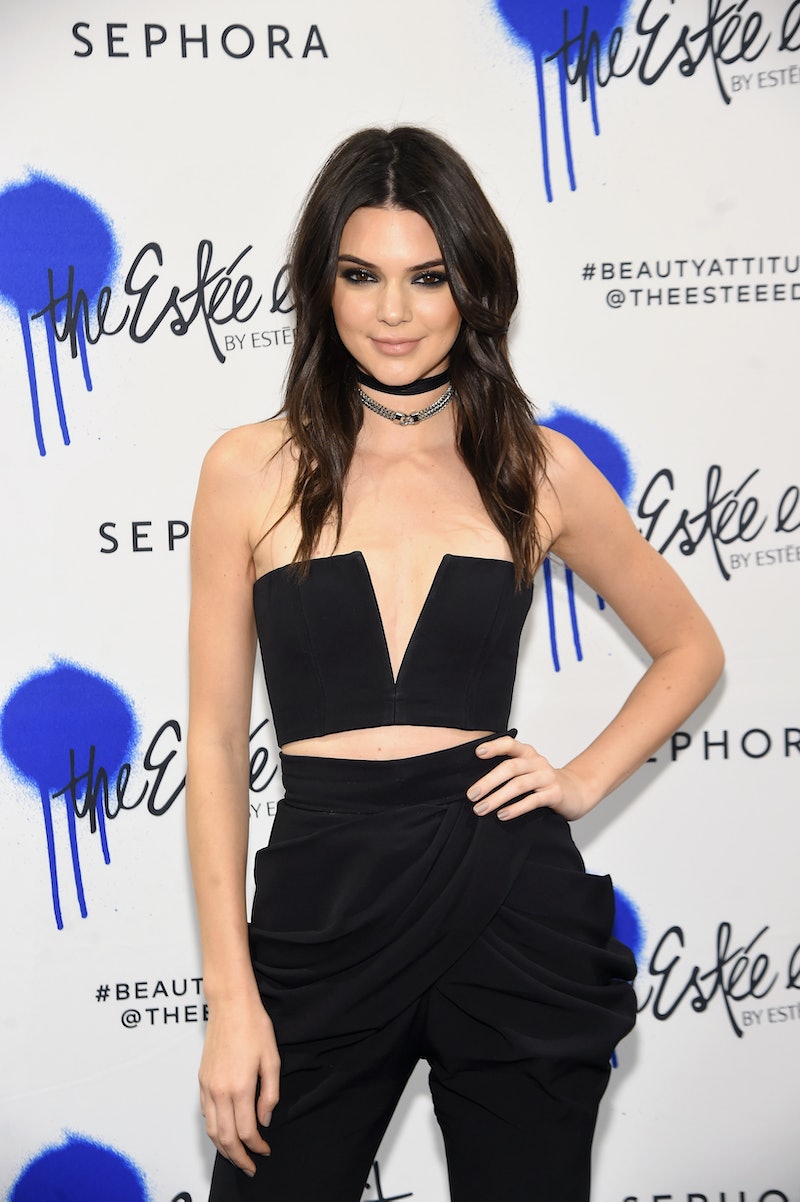 If you want to win the heart of a Kardashian-Jenner sister, you've got to be creative about it, and 23-year-old Lakers point guard Jordan Clarkson managed to do exactly that at Coachella. While at the music festival, the basketball player literally jumped over Kendall Jenner's head with nothing but a running start, as shown in a Snapchat video — fueling rumors that Clarkson and Jenner are dating, and providing some impressive entertainment for fans everywhere.

I mean, seriously, talk about being head over heels! Although neither Clarkson nor Jenner has acknowledged the rumors that they're dating, Us Weekly has claimed that they're a couple, and the Snapchat video marks the first time the two have been publicly spotted together. Us Weekly reports that the duo have also been spotted at L.A.'s The Nice Guy, and the model once made a courtside appearance at one of Clarkson's games, but they hadn't yet been spotted side by side.

Until now, that is. If Jenner is dating Clarkson, then it's proof she's no longer with Harry Styles, who she's reportedly been in an on-and-off, will-they-won't-they relationship for years (the two were seen together as recently as this past December). And it'd also mean that, like many of her sisters, Jenner apparently has a thing for basketball players; both Kim Kardashian and Khloe Kardashian have wed NBA players (Kim to the Atlanta Hawks' Kris Humphries and Khloe to Laker Lamar Odom).

Yet of all the Kardashian-Jenner women, Jenner has remained the most tight-lipped when it comes to the gentlemen in her life, although she has been quick to shoot down rumors of her alleged romantic escapades with certain other Lakers players. But if the rumors about Clarkson aren't true, Jenner is doing nothing to squelch them — so here's hoping that two are the real, adorable deal. You can check out the silly Snap below:

More like this
Kendall Jenner & Devin Booker Reportedly Broke Up After 2 Years Of Dating
By Jordyn Tilchen
Adele’s All-Female Lineup Includes Kacey Musgraves, Mahalia, & Self Esteem
By Shahed Ezaydi
8 Flirty Games To Play Over Text With Your Crush
By Lexi Inks
Are Cancer & Sagittarius Compatible In A Relationship?
By Kristine Fellizar
Get Even More From Bustle — Sign Up For The Newsletter