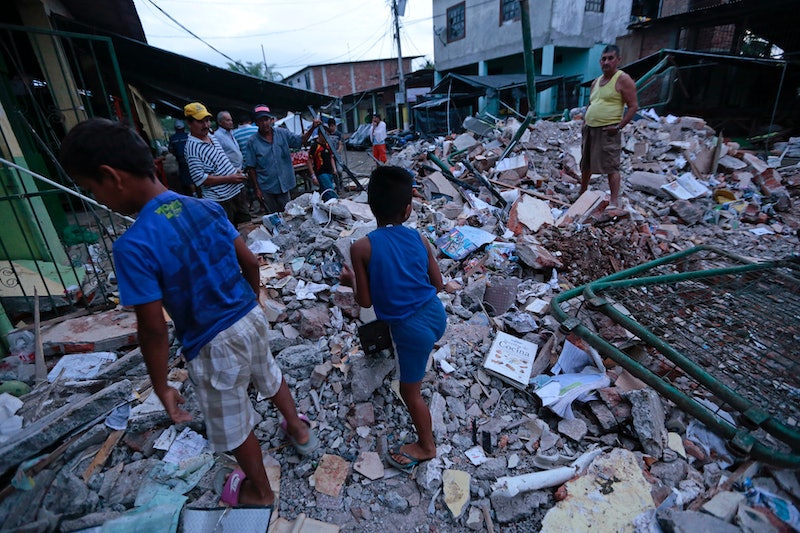 Around 7 p.m. local time Saturday night, a 7.8-magnitude earthquake rocked Ecuador's northwestern coast, near the city of Pedernales. By Sunday morning, it was announced that more than 200 people had been killed by the quake and hundreds, possibly more than a thousand, others were wounded. Volunteers and aid organizations immediately prepared to help Ecuador's earthquake victims, seeking donations of money, blankets, machinery, and more.

The quake leveled buildings and created widespread destruction, prompting President Rafael Correa to declare a national state of emergency. The country's capital, Quito, is located roughly 100 miles from the epicenter of the earthquake, but residents still felt strong effects. The quake caused landslides, which made it difficult for the recovery effort to begin, and aftershocks continued throughout the region. Because the quake occurred on the coast, there was also fear that the initial tremors would cause subsequent tsunamis.

According to NBC News, 10,000 military troops and 3,500 police had been sent by Ecuador's government to respond to the quake. In some cases, local responders seemed to lack the equipment they needed in order to respond. Officials in Pedernales, for example, requested the government to send earth-moving machinery and rescue workers to aid in recovery efforts. While Ecuadorian authorities try to restore order and allocate resources, others can help by filling in the gaps, sending what resources local authorities might not have.

By Sunday, teams from relief organizations around the world, including UNICEF, Oxfam, and the Red Cross, were gearing up to help Ecuador. Some organizations, like CARE, set up specific donation portals for the Ecuador cause. World Vision, which focuses specifically on supporting children's causes, directed interested donors to a similar Ecuador relief fund page, where the organization identified that it was responding to the situation in Ecuador. The Adventist Development and Relief Agency (ADRA) advised people to donate to via its emergency donation page. And Ecuador's local Cruz Roja provided information on how to donate directly to them.

As many victims of the earthquake have been displaced from their homes, there is a need for simple, everyday items in the country, including blankets, clothing, and canned food. Donating these goods is probably easier for you if you happen to be in Ecuador than if you are in the United States. Free Walking Tour Ecuador, a Quito-based travel organization, has begun to collect goods in Ecuador's capital city. If you're in the area, you can drop your donations off at its community hostel location.

If you aren't in Ecuador, it can be expensive to ship goods to the area — not to mention, confusing if you don't know exactly where the goods should go. Global Shapers Quito, a team of about 20 young community activists in Ecuador, has set up a donation page to raise money specifically for everyday goods and household items. Donations made to the organization via its Generosity page will go toward purchasing blankets, clothing, canned food, mattresses, and more.

Following Saturday's deadly earthquake, Ecuador has what seems like a long road to recovery ahead. The death toll might still climb, and further destruction is still a concern, but with the help of relief organizations both in Ecuador and around the world, that recovery process can start. In addition to the donation methods included above, be sure to look for local organizations in your community that might send teams of volunteers or shipments of goods to the area.