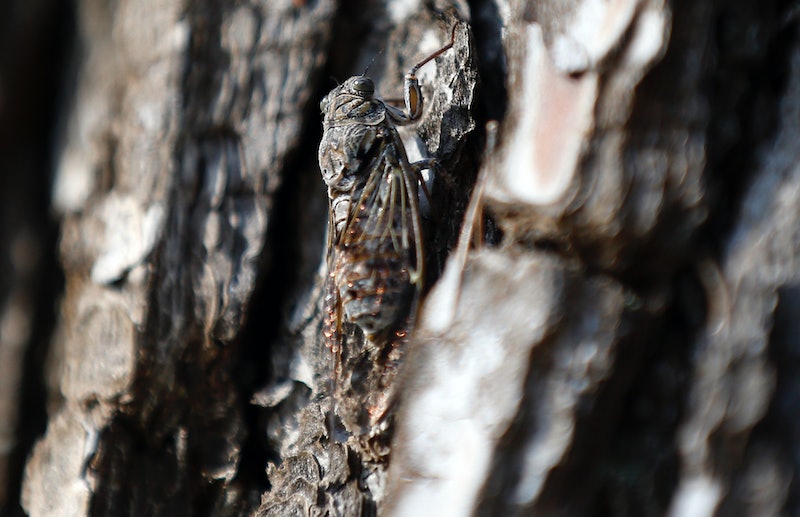 Ew, ew, and more ew. The 2016 cicada mating season is almost upon us, and according to some reports, this year will bring a swarm numbering in the billions. Fortunately, cicadas aren't destructive like the OG insect invaders, locusts; unlike their ever-so-Biblical cousins, adult cicadas don't actually eat anything, and damage to plants usually occurs when they lay their eggs. In fact, they don't even bite or sting. The swarms are notoriously loud, but they're harmless — unless you count the psychological damage from their deafening droning, which the Washington Post once perfectly described as "vaguely menacing." (If you've been so fortunate as to avoid cicada swarms in the past, you can check out what they sound like in this video.)

If you're thinking that all this sounds familiar, you're probably right. Periodical cicadas — which aren't to be confused with annual cicadas, whose life cycles only last one year — live through 13- or 17-year life cycles, and their development is staggered so that a new brood emerges from the ground to mate in different areas almost every year. In fact, the U.S. Department of Agriculture points out that some areas may even see an emergence more than once every 17 years. Basically, almost every spring brings about a new cicada swarm.

This year's brood is known as Brood V, last seen in 1999, and it's comprised of three different cicada species: Magicicada septendecim, M. cassini, and M. septendecula. According to Cicada Mania, all three species are expected to emerge in areas of New York, Maryland, Ohio, Pennsylvania, Virginia, and West Virginia. There's no way to predict exactly when they'll emerge, but it's likely to be next month. Although factors like rainfall can influence the time of emergence, AccuWeather reports that above all, cicadas take their cue from soil temperature — typically, they emerge when the ground reaches around 64 degrees Fahrenheit.

So what happens when they finally make their way above ground? According to the USDA, cicadas are still "nymphs" when they're underground. Once they emerge, they develop into adults, leaving their old skins behind. Male cicadas then start calling for a mate — hence the droning noise. Adults usually live four to six weeks, during which they reproduce and eventually die. In the meantime, their progeny eventually hatches and burrows back underground. Seventeen years later, voila! They're back to creep us out with their discarded husks and off-putting whistles all over again. Yay nature?

More like this
Why Experts Say Sleeping With A Fan On Isn’t Totally Risk-Free
By Sophie McEvoy
Expert-Approved Hacks For Packing A Carry On
By Jessica Goodman
The 6 Best UV Umbrellas, According To A Dermatologist
By Rachael Green
The 8 Best Indoor Door Mats For Your Home
By Jenny White
Get Even More From Bustle — Sign Up For The Newsletter