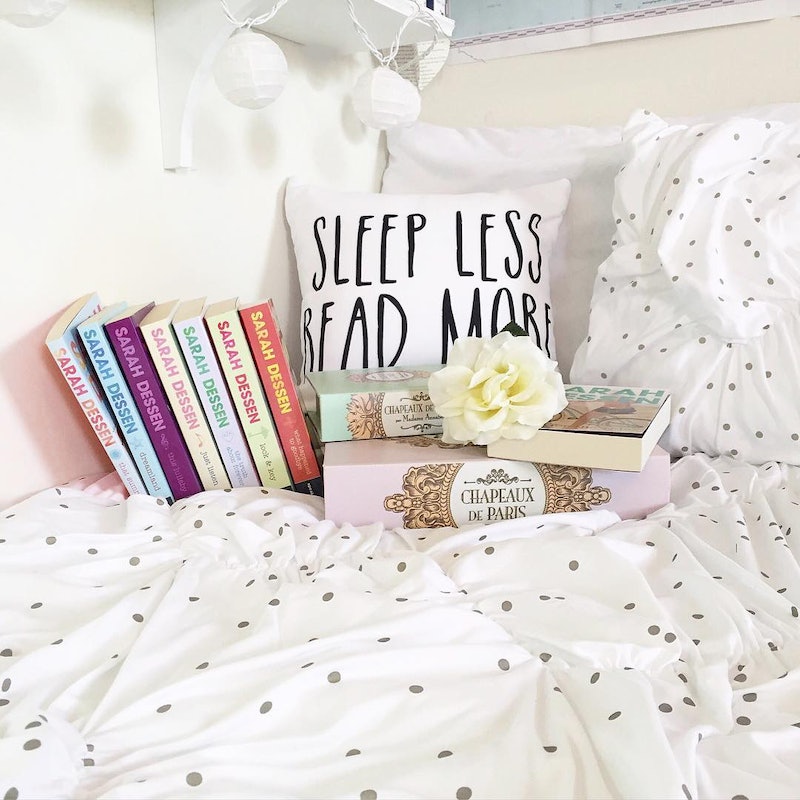 Nothing reminds me of young adulthood quite like a well-loved, dog-eared, slightly sticky, sand-in-the-binding, smelling of Lip Smackers, Sarah Dessen novel. Growing up, I had a shelf filled with Sarah Dessen’s novels, and (as many a long-time BFF and/or former-young-love can attest) I spent much of my time between the 6th and 10th grades attempting to make my own speech sound like Sarah Dessen quotes. You know what I’m talking about: everything I said was terribly profound and romantic, and followed by long, meaningful pauses. And sure, while my old, slightly-jaded self knows that I probably sounded a little silly (a lot silly), when you’re 15 everything is terribly profound and romantic. And Sarah Dessen gets that.

What I love most about Dessen’s novels — other than the cute boys, the daring girls, and the fact that every single one of her characters has intriguing, enviable names (Remy, Auden, McLean, Haven) — was that she so perfectly captures exactly what it’s like to be a teenager. Everything is the beginning and end of the world, every first love feels like the last, you’re just beginning to realize how imperfect and complicated your family is, and you have absolutely no idea that one day you’ll figure out who you are, and how to thrive. Growing up, a Sarah Dessen novel was the next best thing to a best friend — and some days, even better.

So, with no further ado, here are 20 Sarah Dessen quotes that will tell you everything you need to know, about anything that truly matters.

1. “There comes a time when the world gets quiet and the only thing left is your own heart. So you'd better learn the sound of it. Otherwise you'll never understand what it's saying.”

2. “You should never be surprised when someone treats you with respect, you should expect it.”

3. “No relationship is perfect, ever. There are always some ways you have to bend, to compromise, to give something up in order to gain something greater... The love we have for each other is bigger than these small differences. And that's the key.”

4. “It was unrealistic to expect to be constantly in the happiest place. In real life, you're lucky just to be always somewhere nearby.”

5. “Family isn’t something that’s supposed to be static, or set. People marry in, divorce out. They’re born, they die. It’s always evolving, turning into something else.”

6. “You can't just plan a moment when things get back on track, just as you can't plan the moment you lose your way in the first place.”

7. “It's so easy to get caught up in what people expect of you. Sometimes, you can just lose yourself.”

8. “When faced with the scariest of things, all you want to do is turn away, hide in your own invisible place. But you can't. That's why it's not only important for us to be seen, but to have someone to look for us, as well.”

10. “Home wasn't a set house, or a single town on a map. It was wherever the people who loved you were, whenever you were together. Not a place, but a moment, and then another, building on each other like bricks to create a solid shelter that you take with you for your entire life, wherever you may go.”

― Sarah Dessen, What Happened to Goodbye

11. “It shouldn't be easy to be amazing. Then everything would be.”

― Sarah Dessen, Along for the Ride

12. “It’s funny how one summer can change everything. It must be something about the heat and the smell of chlorine, fresh-cut grass and honeysuckle, asphalt sizzling after late-day thunderstorms, the steam rising while everything drips around it. Something about long, lazy days and whirring air conditioners and bright plastic flip-flops from the drugstore thwacking down the street. Something about fall being so close, another year, another Christmas, another beginning. So much in one summer, stirring up like the storms that crest at the end of each day, blowing out all the heat and dirt to leave everything gasping and cool. Everyone can reach back to one summer and lay a finger to it, finding the exact point when everything changed.”

13. “I don't believe in failure, because simply by saying you've failed, you've admitted you attempted. And anyone who attempts is not a failure. Those who truly fail in my eyes are the ones who never try at all. The ones who sit on the couch and whine and moan and wait for the world to change for them.”

14. “You know, when it works, love is pretty amazing. It's not overrated. There's a reason for all those songs.”

15. “If you were the problem, chances were you could also be the solution. The only way to find out was to take another shot.”

― Sarah Dessen, Along for the Ride

16. “We can't expect everybody to be there for us, all at once. So it's a lucky thing that really, all you need is someone.”

17. “It's all in the view. That's what I mean about forever, too. For any one of us our forever could end in an hour, or a hundred years from now. You never know for sure, so you'd better make every second count.”

― Sarah Dessen, The Truth About Forever

18. “Everything looks different when you're older, not staring up at the world but down upon it.”

19. “Some things don't last forever, but some things do. Like a good song, or a good book, or a good memory you can take out and unfold in your darkest times, pressing down on the corners and peering in close.”

20. “It was amazing how you could get so far from where you'd planned, and yet find it was exactly where you needed to be.”

― Sarah Dessen, What Happened to Goodbye