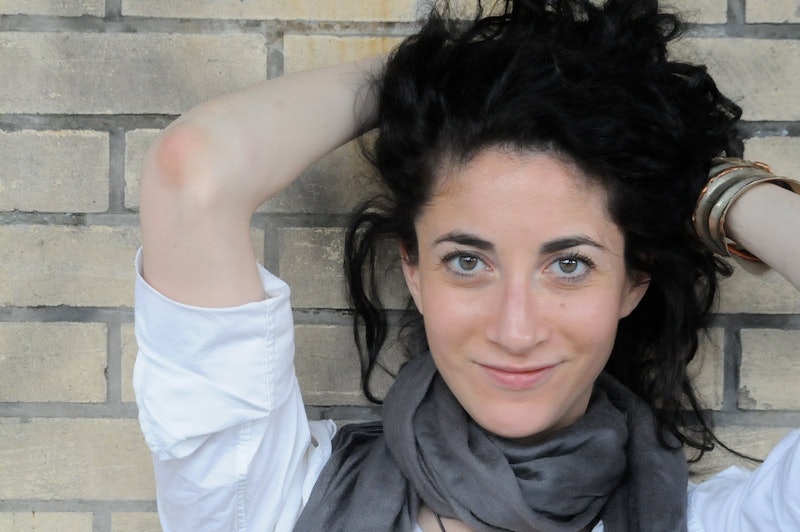 Dystopian fiction includes a community that is threatening or undesirable, often linked to a downfall of current society. In Panic (HarperCollins), Lauren Oliver paints a picture of a small town overrun by desperation and fear, with predators both real and imagined circling its inhabitants. The only difference from Oliver's Panic and other dytopian YA novels is that Panic isn't set in the future, but in present day New York.

For as long as anyone can remember, seniors in the small town of Carp have played Panic the summer after they graduate. The game is launched by intending players jumping from a rock in the quarries into the water below, and it ends with only one person left. That person claims the prize, and this year it's a record-breaking $67,000. Along the way, players participate in secret challenges — the game planners are shrouded in mystery; players get notifications coded in messages around town — testing their fears and survival instincts. One challenge has players walking a narrow plank between the tops of two water towers, another stealing a souvenir from a crazy person's house. Players never know what to expect when they arrive at a challenge, except that there will always be a twist.

Three people have died playing Panic (and four if you count a winner who later committed suicide), but still, year after year, dozen participate. This year, Heather, after a breakup with her boyfriend, spontaneously decides to join with her friend Nat. Another kid in school, Dogde, has always been planning on playing. But he's not in it for the money; he is seeking revenge after what happened to his sister during her year of Panic.

In theory, the game of Panic is outrageous. A dangerous game that has high school seniors risking their lives in challenges to win the pot. Who in their right mind would compete? But with Lauren Oliver's skilled world building and characterization, instead I find myself wondering, well who wouldn't?

Oliver imbues her entire story with a sense of dread and desperation, partly because of her intricately drawn portrayal of Carp, the poor town out in the middle of nowhere, home to 12,000 people. Whether it's the muddy street deemed "Meth Row," the legendary trigger-happy drunk living in the dilapidated house, or the tigers that roam on the farmer's land. Carp itself is predatory. And the house of the second person on that last is where one of the Panic challenges takes place.

Heather had been on Coral Lake only a few times. Trigger-Happy Jack was known for being consistently drunk, and half-insane, and for owning an arsenal of weapons. His property was fenced in and guarded by dogs and who knew what else.

The people of Carp are poor, and often desperate. Heather, who becomes the story's main character, has a little sister Lily and a drug-addicted party mother who spends all her time with her new husband rather than care for her children. With the Panic winnings, Heather can take Lily and get out of Carp. But Dodge, who alternates chapters with Heather, has a wheelchair-ridden sister and a mother who can't pay the hospital bills. Instead, his mother takes up with men around town, who promise her money and security, but never come through.

With Oliver's rendering of Carp, you can practically hear Tony Lucca's song "Devil Town" in the background.

Oliver's skillful portrait of Carp and its inhabitants, weighed down by desperation and a glimmer of hope in the young for a better existence, makes it clear why Panic exists. Of course it exists in Carp.

The same goes for Oliver's characters. Heather, Nat, their friend Bishop, Dodge, and the rest of the cast are never all good or all evil. They aren't plot devices; they are compelling, realistic pictures of their own environment that seem to live and breathe. The good vs. evil debate is turned on its head in Panic, as Oliver depicts a world (could it be our own?) where predators are born from desperation and sadness. Each character has a motivation entering Panic — but does their drive to win, despite the good intentions, turn them into predators? After watching their town turn to a dust-filled community of drunks and addicts, maybe they need that predatory nature to survive and escape.

As Dodge says at one point during the game:

"That was another thing you learned when playing Panic: people would surprise you. They would knock you on your ass. It was practically the only thing you could count on."

But Oliver twists the knife again, by questioning even the world she herself created. These seniors participate in Panic as part of a hope that the money will save them. On the night of their first challenge, Dodge hints at this false optimism.

"Panic, he knew, was one big magic trick. The judges were the magicians; the rest of them were just a dumb, gaping audience."

Oliver also includes echos throughout her novel about how the game never ends — falling in line with the story of the prior winner's suicide and Dodge's ruminations. Will these players, and everyone in similar situations, merely carry their fears and demons with them no matter where they go?

I read Panic in one night, sometimes white-knuckled, and other times lost in thought about the themes Oliver presents. Only a skilled writer would be able to infuse these large questions about fears and poverty into a thriller story about a high school game, and Oliver is that writer. Her deft hand was nearly pitch perfect throughout, with a heavy tone and foreshadowing that allows readers into the emotional journey of her characters. Oliver has said that there will not be a sequel, and I hope in this series-happy market that she holds true to that, because she has created a remarkable standalone story that needs no additions or adornment.