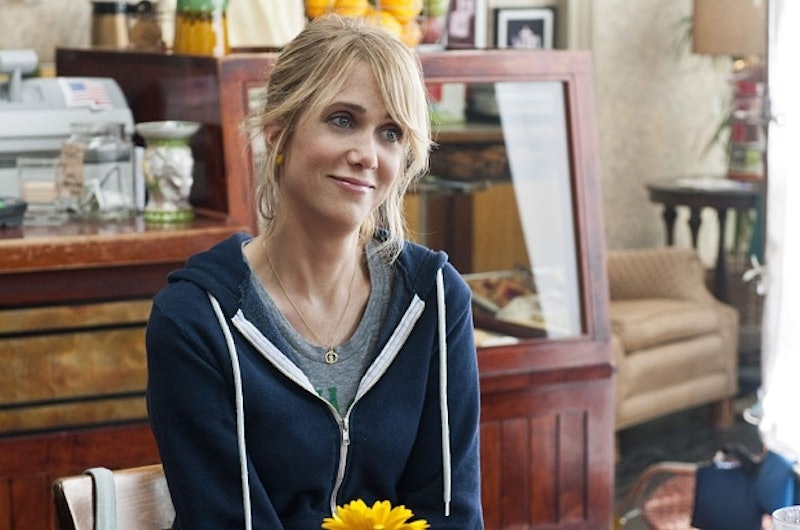 By now, you're probably familiar with "the Bridesmaids effect." It's the term that has been thrown around a lot since 2001, when the all-female comedy starring and co-written by Kristen Wiig won over critics and audiences alike with its raunchy humor and hilarious, but very real, take on female friendship. Since that this rather small film without any big named stars opened way better than expected — it made $26.2 million opening weekend, with an audience that was 67 percent female, and would go on to make over $288 million worldwide — the studios were immediately clamoring to find the next Bridesmaids. In an interview with Salon, the female producer Lynda Obst said Bridesmaids "had the biggest impact of any women's movie that I can remember in my career." The unexpected success of this movie was supposed to help female-driven comedies, specifically R-rated ones, get made and then actually get seen by a wider audience. Five years later, though, the effect of the Bridesmaids effect may just be that it's actually holding the genre of female comedies back.

Last year, Entertainment Weekly wrote the piece, "Welcome To The Summer Of Funny Women," which looked at the four big budget female-led comedies that would be hitting theaters later that summer: Hot Pursuit starring Reese Witherspoon and Sofia Vergara; Melissa McCarthy's Spy, the Elizabeth Banks-directed Pitch Perfect 2, and Amy Schumer's Trainwreck. Three of those movies would go on to become box office hits, but, in the piece, Paul Feig, who directed Bridesmaids, Spy and this summer's all-female Ghostbusters, told Entertainment Weekly, "It’s an amazing sign of progress, but I think it feels a little silly to be celebrating it. It’s good, but it’s not enough."

That's true. Funny women aren't new, and they definitely shouldn't be treated like a fad, which, unfortunately, they are with every essay or feature that, over the last five years, thinks they need to declare that funny women are here and they're making movies. These pieces give the sense that, despite the fact that everyone seemed to think Bridesmaids was the beginning of something new, we're still thinking about it the same old way we always have: That female-driven comedies are unexpected, instead of common occurrences. We may be hearing about more female-driven comedies hitting theaters, but they're all sort of the same kind of comedies.

In 2013, when Bitch looked at how Bridesmaids changed Hollywood, the magazine found that most of the female-focused comedies the studios were investing in, like Leslye Headland's 2012 film Bachelorette and that same year's For A Good Time Call, were not very diverse. All of the films starred white women, most of whom are thin and weren't expanding the "scope of the stories considered acceptable" since they looked at "middle-to-upper class women with career and hetero dating problems." Bitch added that, in the end, "Bridesmaids has hardly been a potion to completely transform how women are treated in Hollywood."

Melissa McCarthy is the one exception to all this, churning out high-grossing R-rated comedies — her latest movie, The Boss, which was released earlier this month, has already raked in nearly $42 million — and playing characters that are unlike the ones we've seen before. Not to mention, that McCarthy looks unlike most of the women starring in movies right now and uses that to her advantage. Her characters often push the envelope with weird hair, unflattering clothes, and personality quirks. McCarthy makes you look beyond the physical to learn to love these characters for who they are.

Judging by her box office gross over the past five years (a combined total of nearly $532 million for her starring roles in Identity Thief, The Heat, Tammy, Spy, The Boss), her approach seems to be working, though, as Vulture recently pointed out, it doesn't mean McCarthy's being treated with the respect she so clearly deserves. Instead of the exception, though, it would be nice to see McCarthy become the rule post-Bridesmaids. After all, wasn't that what we really wanted from that movie's unexpected success? To see different kinds of women get to be different kinds of funny?

When the studios attempted to find their next Bridesmaids, they seemed to forget what that really meant. Bridesmaids was a hit because it seemed to defy all of the things that the male-driven studios thought made for successful releases. It starred basically all women, and these were women who weren't afraid to get dirty. The movie was about something so feminine — a wedding and the dynamic of its all-female bridal party — but yet the jokes seemed closer to what you'd expect from a Judd Apatow movie. Bridesmaids succeeded because it wasn't like all the other movies out there starring women. But, somehow, studios saying they need to find the "next Bridesmaids" means they're looking for something formulaic when they should be looking out of the box.

Trainwreck, The Boss, Amy Poehler and Tina Fey's Sisters, the success of each of these films is a sign that the interest in female comedies isn't waning anytime soon and that we're making progress to eventually not having to treat these funny female-led movies as if they're rare gems. But to really make a change, we can't be looking for the next Bridesmaids. We have that already, and, as great as it is, we don't need another. What we do need are new female voices in comedy that tell their own unique stories. That's why the greatest effect Bridesmaids could have in the next five years is that studios put their money and support behind funny female-led movies that don't fit the mold and instead break it.

And, most importantly, movies that don't need to have anything in common with Bridesmaids.

More like this
20 Years Later, Kelly Clarkson & 'American Idol' Judges Reunite For Her Hollywood Walk Of Fame Star
By Radhika Menon
After 'Hocus Pocus 2', The Sanderson Sisters Are Coming to Broadway
By Radhika Menon
Lin-Manuel Miranda & Tituss Burgess React To 'Little Mermaid' Casting Backlash
By Radhika Menon
14 Women To Watch This Oscar Season
By Marina Watts
Get Even More From Bustle — Sign Up For The Newsletter