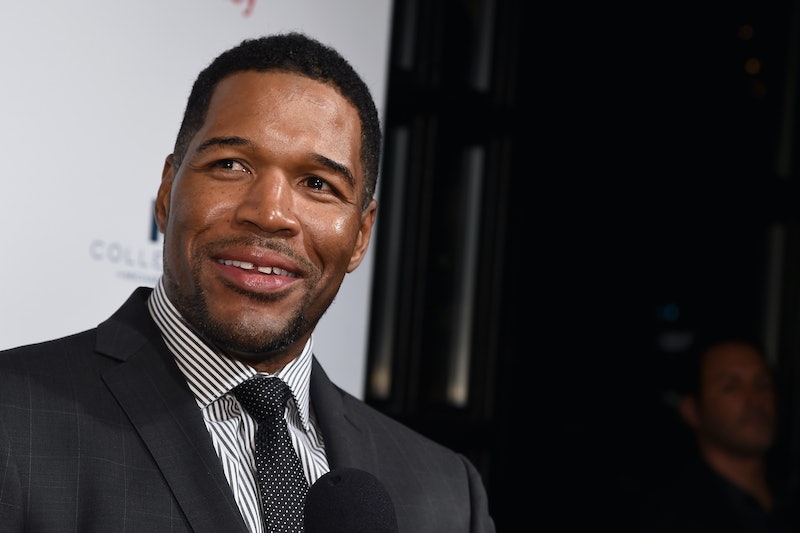 It looks like Kelly Ripa will once again be on the hunt for a new morning show co-host. According to The Hollywood Reporter, Michael Strahan will be leaving Live With Kelly and Michael to claim a full-time hosting position on fellow morning program, Good Morning America. It's a hosting job that the former NFL player has been working twice a week since 2014, and will now be taking on full-time come September. But what about his time co-hosting Live With Kelly & Michael? Thankfully, there are no hard feelings, as Strahan is only making the career moves necessary for him to reach his own personal goals.

“My time with LIVE with Kelly and Michael has been transformative, and my departure will be bittersweet. Kelly has been an unbelievable partner, and I am so thankful to her and the entire team. I am extremely grateful for the amazing support I've received from all of the fans," Strahan commented on his departure. He also took time to express his excitement for his next move in saying, "I look forward to continuing to work with the incredible team at GMA. It is an exciting opportunity to be able to bring unique stories and voices to the audience."

It also seems like GMA couldn't be more excited for Strahan to join them in September. "Michael has been a stellar addition to the broadcast. Over the past two years on GMA, he’s proven to be a tireless and versatile broadcaster with an incredible ability to connect with people, from veterans to American pop culture icons and newsmakers," said ABC News President James Goldston. "He will end a four year run as Kelly Ripa’s co-host on LIVE!, where he has honed his skills as an interviewer with genuine warmth and a quick wit. At GMA he’ll now have even more opportunities to tell stories that inspire, inform and empower people."

As for the future of Kelly Ripa's show, the network is going to be holding auditions for a new co-host, just as they did in 2011 after the departure of original co-host, Regis Philbin. A public statement on the hosting switch has not been released from Live! or Kelly Ripa as of yet. All fans can do now is keep their fingers crossed for whoever they end up wanting to take the seat next to Ripa next. As for Michael Strahan, I'm pretty sure he's going to rock whatever hosting position he's in. Get ready for a tear-filled end of the summer departure episode.

More like this
Bachelor Nation's Blake Horstmann Is Dating 'Love Is Blind' Star Giannina Gibelli
By Jake Viswanath and Radhika Menon
Howard Stern's Net Worth: Is He The Richest Man In Radio?
By Hugh McIntyre
Kris Jenner Drunkenly Toasts Khloé Kardashian’s 38th Birthday With This Speech
By Grace Wehniainen
RHOA’s Kenya Moore Said Her Friendship With Marlo Hampton Is “Too Far Gone”
By Brad Witter
Get Even More From Bustle — Sign Up For The Newsletter