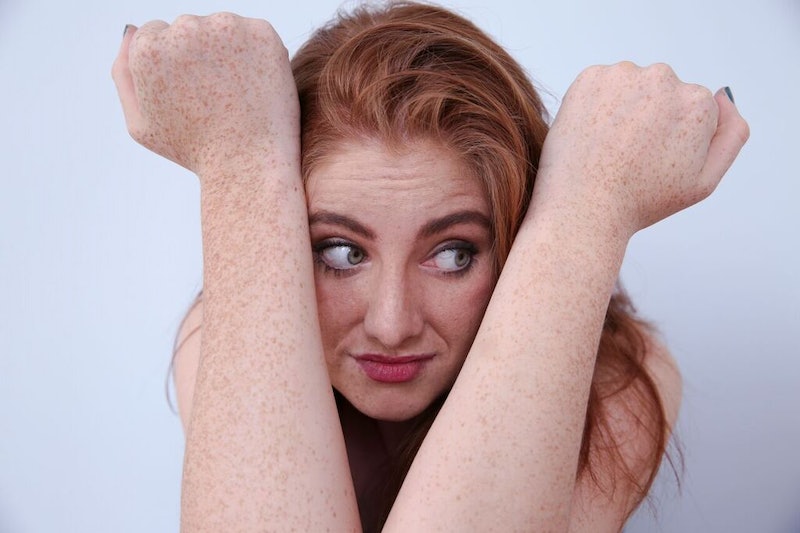 If you're a hypersensitive person, you might blame yourself when a negative situation arises. While the scenario may have nothing to do with you, sensitive people assume that they're the one at fault. If you do this, there are ways to stop taking things personally that you should explore, because it's important to feel confident and free of anxiety.

Rather than having the whole world on your shoulders, you need to remember that everything negative that happens in your life is not always your fault. According to Elite Daily, people tend to forget about certain external factors in particular situations. For example, if your friend is yelling at you and you can't figure out why, it probably has nothing to do with you, but rather stems from something stressful that may be going on in their own life. Essentially, try to remember that you're not responsible for the actions of others. Instead of thinking there's something wrong with you, think about how you can view the situation differently. If you don't know how to do this just yet, but want to take charge of your life, here are 10 ways that may help you stop taking things personally on the daily basis:

1. Find A New Way To Look At Negative Emotions

Rather than feeling like everyone is out to get you, try to view these not so pleasant situations with a different mindset. "When a mammal experiences a social setback, it feels like a survival threat even though you consciously know it isn’t. That’s why we have such a strong reaction when we think others are putting us down," says Loretta Graziano Breuning, Ph.D. in an interview with Bustle over email. "But our mammal brain learns from life experience. Every time you felt put down in the past, your brain built a circuit. That makes it easy for the put-down feeling to turn on today. You may be convinced that someone is putting you down without realizing that you are putting yourself down with your old neural pathways. You will keep doing that until you build a new pathway. If you find a new way to look at the old hurt, and repeat it every day for 45 days, you will build a new circuit in your brain. That makes it easier to see the evidence that people are not necessarily putting you do."

2. Let Go Of Needing To Be Liked

It's never easy to accept the fact that it's pretty impossible to get everyone to like you. While it would be amazing if everyone could get along and drama ceased to exist, the reality is that there are just some people who you're probably not meant to be friends with — but, hey, that's OK. "It’s important to let go of the need to always be liked because it’s impossible to be liked by everyone, and you will drive yourself insane trying to. You simply can’t take it personally — even though it seems personal — when people throw negative comments or behavior your way, " says co-founder of Elite Daily Gerard Adams in an interview with Bustle over email.

If someone is saying something you don't like, take a step back and evaluate the situation. According to Psychology Today, Abigail Brenner, M.D. says, "Don’t make assumptions about judgment or criticism seemingly directed at you. Maybe it’s not about you at all, but rather about them and their own perceptions projected onto you. In fact, it’s almost always about them, their issues, their needs, and their desire to control you and/or a situation."

4. Don't Let Others Define Who You Are

Sometimes it can be hard to not let what others say about you affect how you feel about yourself, but it's important to realize that what those people are saying doesn't necessarily define you, but rather reveals a lot about their own issues, instead. "All it is is the insecurity of that person coming through. It’s their character coming out, and it isn’t pretty. It’s not actually a reflection of you, or the truth — only you can define who you are. So to the best of your ability, remember that it’s not really about you," says Adams.

5. Allow Feedback To Help You Grow

Don't be afraid of constructive criticism. While your first instinct might be to take it personally, it actually can serve as a huge opportunity for growth and self-reflection. "Realize that feedback is not meant to crush you or tear you apart, it is meant to correct something that is not working, or make help you to grow. If we look at things as growth opportunities, we stop taking them as personal attacks," says psychologist Nicole Martinez, Psy.D., LCPC in an interview with Bustle over email.

6. Remember To Admire And Trust Yourself

Instead of allowing your happiness to be dependent on other people, focus on your own worth and value. "What matters is who is in the mirror — that’s your competition. Value the opinions of people you trust and admire, but above all else, admire and trust yourself. If you believe fiercely enough in your mission, nothing will sway you from creating the dream life that you desire and deserve," says Adams.

While it might be hard to try to not take something personally in particular situations, it's helpful to step away from yourself and view the scenario from the other person's point of view. "I remember that it’s OK for someone to be upset with me, rude to me, or say something that I don’t like. Life goes on and we are all entitled to our feelings. You can’t please everyone and with time, and removing the expectation of doing so helps me take the pressure off," says editor and CEO of Blawnde Annie Lawless in an interview with Bustle over email

8. Do A Reality Check

If you feel like you're internalizing a situation, but not 100 percent sure how you should react to it, it might be wise to ask yourself some questions. "When faced with these thoughts and feelings, you need to work on taking a step back and asking yourself some reality checking questions. This takes practice, but with practice, your thinking can change. Ask yourself, is there merit in what they are saying? Can I learn and grow from it? Does what they are saying actually apply to me?" says Martinez.

9. You're Not Always Wrong

Whenever someone is saying something negative about you or a situation, it doesn't necessarily mean that they're right and you're wrong. Sometimes two people have different opinions, and neither one is necessarily wrong. The person may not be disagreeing with you (or trying to make you feel bad) as much as they just have a different point of view. "When someone reacts negatively to me, it doesn’t mean I am the one that is wrong in that situation," says Lawless.

If something negative was said to you, it might actually have nothing to do with you at all. That person could actually be taking their own personal struggles out on you. It might hard to remember or believe at first, but if you slow down and really analyze why someone may be might be reacting a certain way, you'll probably find that the source of the problem has almost nothing to do with you at all. "I step back and take a look at the surrounding circumstances of the negative interaction. Did this person say something nasty because they’re going through a tough breakup? Was this person rude to me because they just lost their job? More often than not, I realize that a negative interaction with someone has very little, if anything, to do with me when I evaluate the surrounding circumstances," says Lawless.

Instead of putting all the pressure on yourself because something negative happened, try to analyze the situation and figure out if the root of the problem is something else entirely. Soon you'll probably see that everything is not your fault, making it easier to prevent others from defining who you are and controlling your emotions.