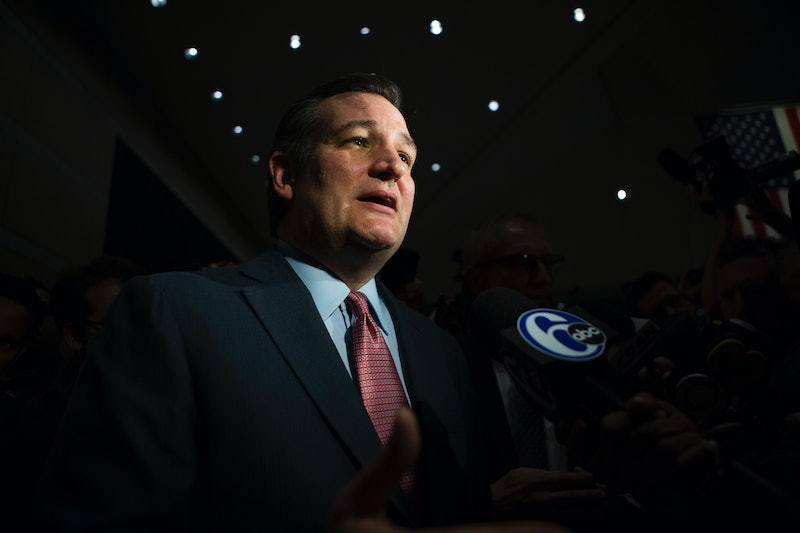 A few months back, Ted Cruz drew criticism for bashing "New York values," and stood by that criticism when asked about it at a debate. Now, in the wake of the state's primary, it's become very clear what New Yorkers value, and it ain't Ted Cruz: He came in third place in the state, losing decisively to Donald Trump and John Kasich. On Tuesday, New Yorkers got revenge on Ted Cruz for his "New York values" comment — and not merely by delivering the state to Donald Trump.

Although Ted Cruz has been behind in delegates since the New Hampshire primary, he's always had a mathematical path to winning the nomination outright — until New York. The magnitude of Cruz's loss in the Empire State means that it's no longer possible for him to win 1,237 delegates in the primaries. Even if he wins every single other delegate every remaining state — which, to be clear, won't happen — he will fall short of the magic number. This puts him in the same category as John Kasich, who's also no longer mathematically viable.

So, thanks to Cruz's abysmal performance in New York, Donald Trump is the only candidate who can win the nomination without a contested convention. This, of course, means that Cruz himself can only become the nominee if the convention is contested.

When Cruz said that Trump "embodies New York values," he meant that Trump is secretly liberal. But the comment came off as more than just that. It effectively served as a blanket insult of all New Yorkers, and more importantly, their moral underpinnings. In addition, New York has a significant Jewish population, and some listeners heard shades of anti-Semitism in Cruz's remarks.

The moral of the story: When running for president, it's extraordinarily dumb to make fun of a specific state by name, especially since that state will eventually vote in the election you're running in. You can get away with bashing Washington D.C., because D.C.'s sole purpose is to host the federal government, but that's about it. Cruz surely thought he was being clever when he took a swipe at "New York values," because let's be honest: He thinks everything he does is clever. In actuality, though, it was a remarkably boneheaded comment, and on Tuesday, Cruz's New York chickens came home to roost.