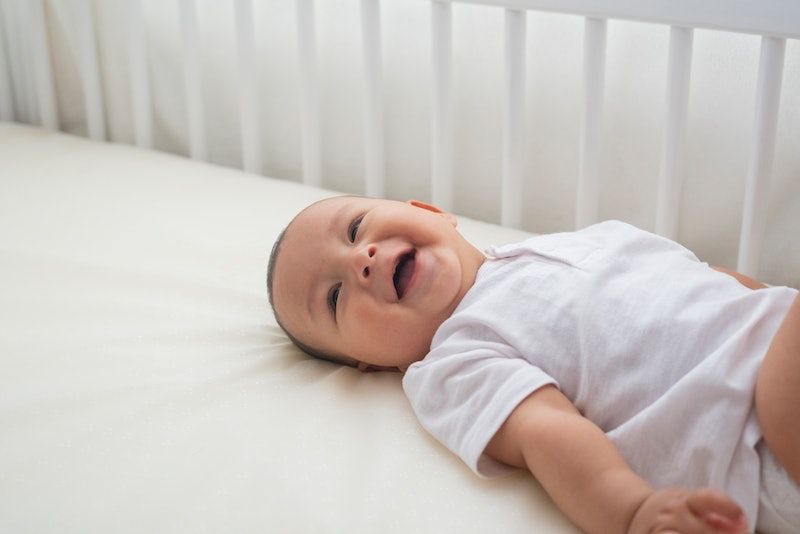 As the mother of two young children, I've spent a considerable amount of time pouring over baby names and have always been drawn to unisex names. But while I considered many gender-bending names for little girls during my pregnancies, I don't think I gave baby names for boys that are typically "girl" names a fair shake. As a feminist, this surprises me — equality being the cornerstone of my belief system and all. Isn't avoiding "girl" names for little boys just feeding into the idea that men must always be masculine, un-soft, and essentially the antithesis of whatever it is people think constitutes being female?

Here's the bottom line: There are a ton of beautiful names out there for little boys that may be deemed feminine by the mainstream. It doesn't mean you shouldn't use them. In fact, what's interesting is that many of the names of this list were historically considered male names but have transitioned into female-centric names over time. It just goes to show that defining a name by gender norms is silly — there's no way to tell how a name's connotation will change over time. In my book, every name is fair game whether you're having a little boy or a little girl. Besides, it's your kid and you'll name it whatever the heck you want, right?

In that spirit, here are a few of my favorite "girl" names for little boys. Go forth and blaze those gender-defying trails, my friends.

This name wasn't even a blip on the radar for little girls until 1994, when it suddenly broke into the Top 1000. Since then, it has consistently ranked within the top 50 names for little girls in the United States. However, in the 1880s, this name — which means "son of Adam" — was used exclusively for boys and was quite popular at that.

Remember sweet Ashley Wilkes in Gone with the Wind? His moniker is now considered a major throwback for boys, with the name having gone from 100 percent male in the 1800s to essentially 100 percent female in the present. But I still think this name is super cool for boys, partially because I knew a super-chill guy named Ashley in high school and partially because I like the nickname "Ash."

This name has made all kinds of changes over the years, going from last-name to first-name and boy's name to girl's name. This name — which means "ruler of the elves" — is still cool AF for boys, though. Plus, it makes me think of Jackson Avery from Grey's Anatomy ... so there's that.

Although this name has been in the Top 50 for little girls for the past five years or so, it wasn't always popular for females. In fact, prior to 1974, it was used exclusively for males. It means "elf ruler," and it was particularly popular for little boys in England during the Middle Ages.

Another surname turned first name, Bailey means "law enforcer" or "bailiff." Pretty rad, right? This name actually peaked for boys in 1997, so it wasn't that long ago that it was unisex (at the very least).

Depending on where you live, this might sound like a weird addition to this list — in the UK, Blair is still incredibly popular for boys as opposed to girls. In the United States, though, you'll be hard-pressed any more to find a little boy named Blair. Meaning "dweller on the plain," this Scottish name deserves a comeback.

Confession: I love this name for little boys. Irish in descent, Cassidy — which means "curly-headed" — always makes me think of Butch Cassidy, the notorious bank robber-slash-Wild-Bunch-gang-leader of the Old West. How could that not be a killer name for a boy to have? Plus, the nickname "Cass" have a good vibe to it, don't you think?

I'm not entirely sure why this name flipped from 100 percent male in 1880 to 92 percent female in 2012, given its androgynous meaning of "from Denmark." But it definitely flipped, and you don't hear of many boys by the name these days. I have a good female friend and a good male friend named Dana, and they're both brilliant people. So, yeah, I'm a fan.

Alluding in meaning to a hurricane-force wind, this name is a force of nature no matter who you use it for. Having said that, it has gone from exclusively male in the 1800s to almost exclusively male today. But considering it is the name of Liam Hemsworth's character in the Hunger Games film franchise, we may see it become a popular unisex choice.

As names go, Harper is having a moment for little girls and has been for several years now. But the name, which means "harp player," wasn't always considered feminine and was quite ordinary for boys dating back to the 1800s. Since I long ago pledge my undying love to the late Harper Lee, I think tipping your hat to her via this name for a little boy is perfect.

While this Scottish name meaning "garden of holly" has dropped off in popularity for little boys, there's still much to love about it. Did you know that President Gerald Ford was born a Leslie? How about Bob Hope? Not to mention Leslie Howard, the actor who played the aforementioned Ashley Wilkes in Gone with the Wind? And how could anyone forget the hilarious late actor Leslie Nielson from the Naked Gun series?

In full disclosure, my daughter's name is Marlow, so I'm pretty partial to this name. The name, which means "driftwood," isn't necessarily a mainstream name for either sex, but it has been leaning heavily to little girls in the last few years. Same with Marley. But Marley obviously hearkens Bob Marley, and Marlow ... well, I know at least one guy named Marlow who is cool AF too — one of my favorite fellow writers, Marlow Stern.

Currently ranking at No. 189 for girls, this name is totally rock 'n roll — and rock 'n roll don't follow no rules, y'all. Use it for a boy; use it for a girl. It's fierce either way. The King would most definitely approve.

It's easy to see why this name is seemingly synonymous with little girls these days, given the mass appeal of Oscar-winning actress Reese Witherspoon. The name, which is a spelling variation on the masculine Rhys, has been on the decline for boys since 2003. But, let's face it, Reese is just a great name any way you slice it.

More like this
11 Trends From The ‘90s That Made You Feel So Cool
By Julie Sprankles
The 'Hocus Pocus' Sequel Finally Has A Release Date & It Makes Total Sense
By Shannon Barbour and Radhika Menon
Sandra Bullock, Girlboss Extraordinaire
By Matt Harkins & Viviana Olen
Remember These Ancient Pieces Of '90s Tech?
By Lucia Peters and Emma Carey
Get Even More From Bustle — Sign Up For The Newsletter