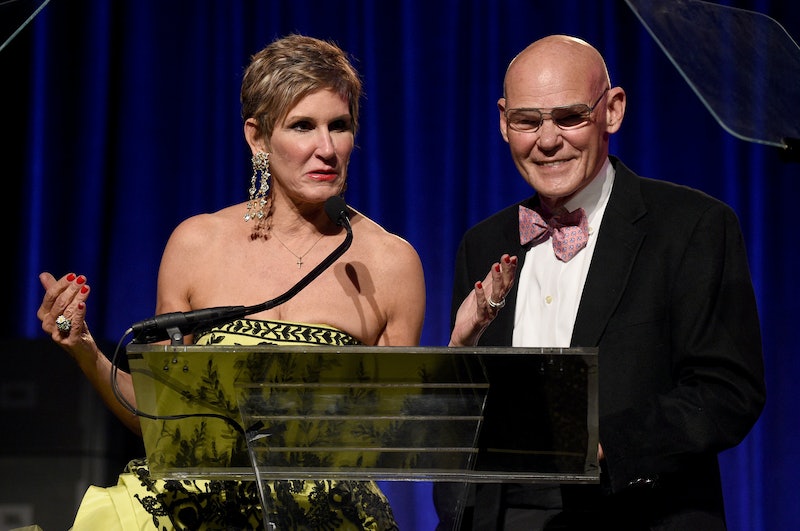 So, you met someone. And you're definitely interested in pursuing something serious, except for one thing: This person has completely different political beliefs than you do — and it's an election year, with Donald Trump and Hillary Clinton battling in what may be one of the most contentious in history. You figure there isn't a worse time to pursue a relationship with your political mismatch. But, is your love doomed?

It's easy to forget in the polarizing political cultures — especially an election season — that there are several examples of famous couples who have come from different parties. Granted, some switched when they married, but they came together from opposite sides of the aisle: Democratic strategist James Carville and Republican consultant Mary Matalin; John Kerry and Teresa Heinz Kerry (she was married to Republican Sen. Henry John Heinz III and registered with the GOP before she married Kerry); and even George W. and Laura Bush (she was raised a Democrat). Arnold Schwarzenegger and Maria Shriver were another famous one of a Republican and Democrat uniting as a couple, and their split appeared to be wholly unrelated to political differences.

But how can that be when headlines like "Here Are All The Sexist Things Donald Trump Said About Hillary Clinton Wednesday Morning" are real? Could any proud, card-carrying feminist date someone who wants to Make America Great Again?

While that may be a tough romantic pill to swallow, Winter is adamant that love can conquer all — or rather, the mundane, day-to-day tasks of real-life relationships subsumes political squabbles. As she puts it, "Deciding who's taking out the trash or where to go on vacation are rarely impacted by political views."

Winter isn't alone in thinking that political differences shouldn't sever an otherwise compatible romantic relationship. During the last presidential election back in 2012, Megan McArdle wrote for The Daily Beast that, "It's hard enough to find someone who is attractive, good to you, and fun to be around. Why on earth would you make it harder by refusing to consider anyone whose opinion on the relative merits of national health care programs differ from yours?"

Well, the short and simple answer is for some people, politics are do or die. More than religious of cultural beliefs, politics form their core values. Or as Aimee Lee Ball wrote of inter-party dating for The New York Times:

[P]olitics can make people apoplectic, particularly in a climate of partisan sniping and in-your-face punditry from MSNBC and Fox News.

Ball wrote that in 2010, but some studies show political polarization among the American public has only increased since then. A 2014 Pew Research Center study found "Republicans and Democrats are more divided along ideological lines — and partisan antipathy is deeper and more extensive — than at any point in the last two decades." Among the findings, 36 percent of Republicans saw the Democratic party as "threat to the nation's well-being," and 27 percent of Democrats felt the same about the GOP.

Yet, for many people, politics seems like more an abstract concept, like talking heads on a TV screen and memes in their Facebook feed. To them, deciding who's taking out the trash and where to go on vacation are matters far more relevant to their lives and #relationshipgoals.

In fact, for most people seeking a mate, age, religion, ethnicity, and educational level matter more than shared political partisanship. A 2013 Stanford Business School study used OkCupid data to figure out which factors influenced people's interest in other dating profiles. While the study found that "shared political characteristics increased the messaging rates in statistically significant ways above a baseline rate," a number of other factors far increased the probability of messaging someone. The analysis revealed that the biggest predictor of interest is age. If someone is within five years of your age, the likelihood that you'll be interested in that person doubles. After that comes shared religion, which counts for a 50 percent boost in interest. From there, shared ethnicity boosts interest by 16.6 percent and educational level by 10.6 percent. While shared political affiliation can boost interest by 9.5 percent, one can argue that many other factors clearly come into play before Red versus Blue does.

According to a study from the Pew Research Center, 1 in 10 Americans couldn't care less about politics, so for this minority segment, political party affiliation, perhaps, won't ruin the fun (I use that term loosely) of dating. These people are what the center calls Bystanders and the politically disengaged.

Of course, if you're reading this, you likely don't count yourself as a Bystander. You're interested in politics and probably want a partner who is, too. Still wondering if you and that honey from across the aisle have a future together?

First, consider your definitions, says Logan Levkoff, a sexologist and relationship expert who is also on FYI's Married At First Sight. "It's really hard for people to be like James Carville and Mary Matalin. There's a difference between being a registered Democrat and a registered Republican and fully believing in every core tenant the party belongs in."

Levkoff says she and her husband belong to different parties, but their "core belief system about issues is the same" because of where they fall along the political spectrum. Those same core beliefs make their relationship work. Without them, she doesn't think they could be together. "You can either go through an entire presidential election and not talk to each other or set guidelines for yourself," she says. "Otherwise, you can have a huge fight — not the type of fight that ends in make-up sex, but the kind of fight that ends in you totally despising the other person."

But it can be done.

"There are times in the conversation where I say, 'Alright, I'm done, I can't continue this conversation, we're at the dinner table,'" Levkoff says. "At some point, you have to say, 'I'm done.' It does depend on how passionate you are about politics. Some people are. Some people aren't."

It may also be more complicated that strict party-affiliation, Levkoff points out, when there are specific issues that people feel especially strongly about or hold as part of their core beliefs. "It's very difficult for someone who's completely pro-choice to date someone who fundamentally believes women shouldn't be allowed to make choices for their bodies," she says.

Still, Andrea Syrtash, relationship expert and author of He's Just Not Your Type (And That's a Good Thing), tells Bustle that it's important for people to remember me that you — and your prospective mate — are more than just a Democrat or a Republican.

"Remember that you're not defined solely by your political affiliation," she says. "It's a reflection of you, but not the whole picture of you."

She does admit that things get significantly more complicated if you fall into the extreme of either end of the political spectrum. As Levkoff notes, different part affiliations may be on thing, but if your political beliefs define all your beliefs, it could be a problem.

However, this concern doesn't just apply to party affiliations, Syrtash says. "Anything in the extreme can make it hard to recover," she tells me. "I say the same about extreme vegetarians. Like every time you're eating meat, they're judging or criticizing you. If someone is extremely into a political candidate and can't stop talking about them and shoving it down your throat, at that point, they're not respecting your right to disagree. They're trying to change your mind when you don't have the same belief."

In the long-term, Syrtash says that kind of dogmatism — about politics or anything else — will put too much strain on your relationship.

"What it boils down to is, it's OK for you and your partner to have different viewpoints," she says. "What's important is that you respect differences."