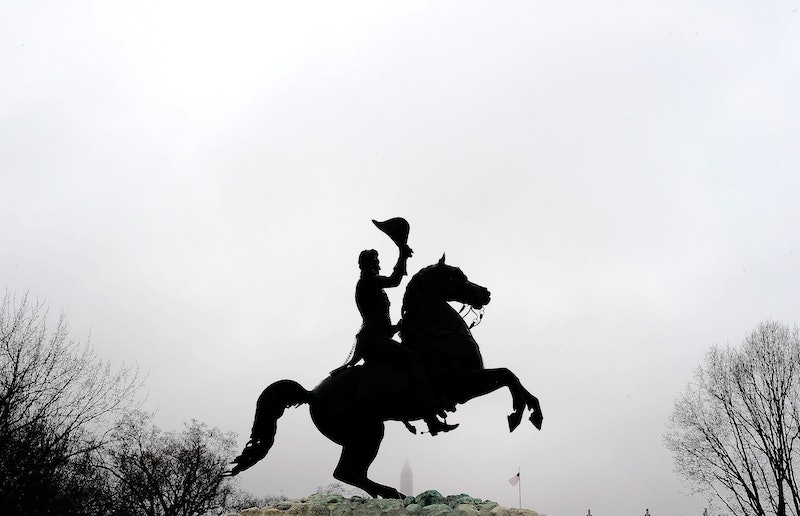 On Wednesday, America was in mixed mayhem over the U.S. Treasury's future plans for the $20 bill. For anyone who has not heard, Harriet Tubman, the utterly historical and hugely important abolitionist, will replace President Andrew Jackson on the front of the new $20 bill, which is intended for release in 2030. However, even in these moments of triumph for women, there was gossip in the shadows of this conversation that Americans have not seen the last of President Jackson. Well, in fact, there is some truth to these rumors: Treasury Secretary Jacob J. Lew included in his statement that President Jackson will move to the back of the $20 bill.

Frankly, there are some pretty logical objections to this proposal, which will likely come to fruition as more Americans learn of the intended plan. Particularly due to President Jackson's contentious history, the idea may strike many people as insensitive and irrational for the following reasons.

First, the respective histories of the two are not only largely unrelated, but very arguably incongruous with one another. Tubman was born half a century after President Jackson, and her life was delicately constructed around abolition and civil rights activism — the very injustices he, in part, perpetuated through his own actions. Furthermore, she was a former slave, and Jackson was a slaveholder.

It's not that President Jackson's entire character revolved around the fact that he owned slaves, but to ignore that part of his history is to remain willfully ignorant to some of the horrifying facts upon which America was built. For Tubman to share a banknote with a slaveholder — and the man who also initiated the Indian Removal Act of 1830, a piece of legislation that brought about the Trail of Tears — seems insulting to Tubman's memory and legacy, and to the descendants of slaves alike.

Second, Jackson never liked the idea of a central bank, nor did he like paper currency. He was even quoted on the matter on more than one occasion, stating, "I have no hostility to the bank; I am willing it should expire in peace; but if it does persist in its war with the government, I have a measure in contemplation which will destroy it at once, and which I am resolved to apply, be the consequences to individuals what they may." Basically, throwing Jackson's face onto our currency is the Treasury's biggest posthumous troll move in the history of the U.S.

Finally, and on a rational note, Tubman's sharing of the $20 bill with President Jackson's is not only horribly insensitive, but it also just doesn't make much sense. Why does a man hated paper money and owned slaves need to continue to be commemorated on paper money with a woman who fought for her freedom from slave owners?

People who are up in arms about the removal of Jackson from the front need to reevaluate their outrage, especially considering that it's offensive nonsense. And plus, it's not like the government is going to come and take all your old Jackson $20 bills away. People will see Jackson as frequently as Tubman come 2030, thanks both to the fact that he's been on it for ages and that he'll still be on the back — but it's the second point that Secretary Lew might want to rethink.