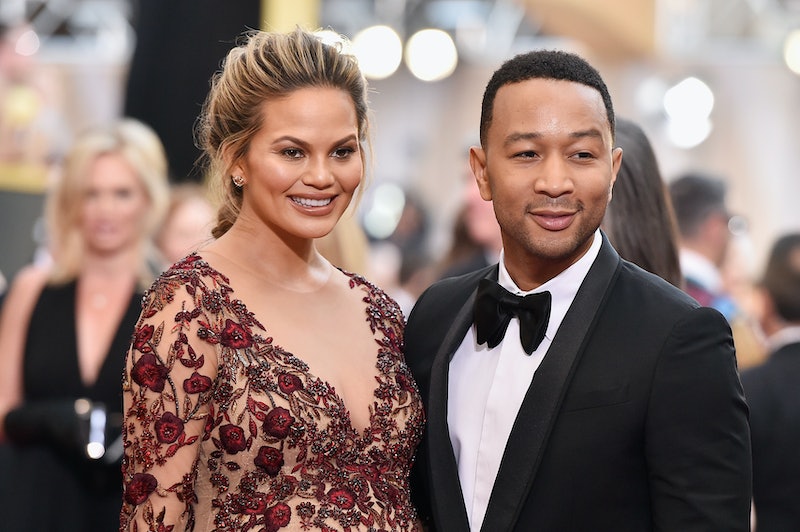 After many teases on Instagram and Twitter, fans now know exactly what Chrissy Teigen's daughter looks like. John Legend shared the first full photo of their baby, Luna Simone, on Instagram Wednesday. As you might've guessed, yes, she is one of the cutest babies you'll ever lay eyes one. Also, if you had a pool going on if she looks more like Teigen or Legend, the answer is neither. Luna definitely looks exactly like both of her parents.

As you can see below, not only does she have a full head of hair, but she has the most beautiful pair of dark eyes. Anyone else think she's smiling in the photo? Clearly, Luna already knows how to work the camera thanks to her famous mom, who also happens to be a model. Way to go, Chrissy and John, on making the most adorable child ever.

I think it's safe to say that they can't help taking pictures of their daughter. In addition to the picture below, Teigen shared another IG on Tuesday featuring only the back of Luna's head. It was super sweet to see Teigen stare at her baby girl with so much love.

Also, I have to note that Teigen's sense of humor as a mom is so on point. Randomly, she'll tweet about Luna or being a new mom with a new revelation. For example, on Tuesday, she tweeted, "No one told me I would be coming home in diapers too." Well, at least she and her daughter have something in common, right?

I definitely look forward to future photos of their baby girl and mom tweets from Teigen.