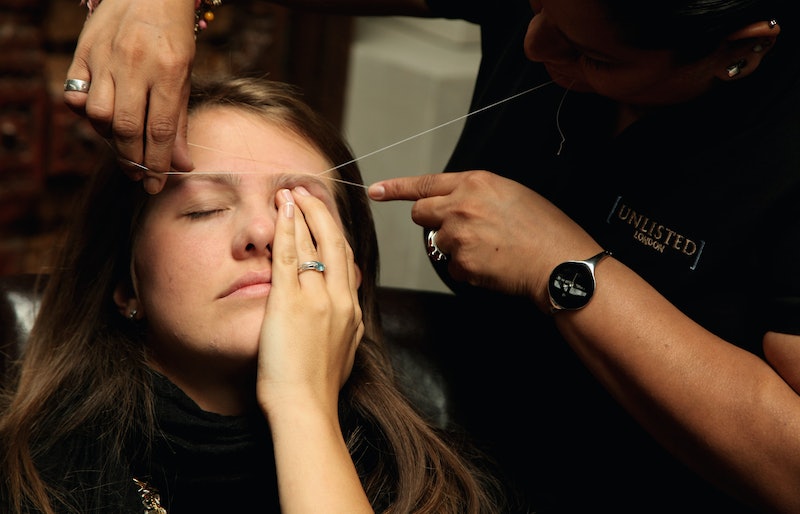 Over at VICE, Jon-Jon Goulian recently wrote a thinkpiece called "In Defense of Hairy Women" in which he sets up his friend on a blind date with a beautiful woman who just happens to have a mustache. Predictably, his friend is turned off, flees from the date after giving the woman an excuse about food poisoning, and later laments to Jon-Jon that he is just not THAT open-minded, but hey, neither is society. Jon-Jon then explains to him the merits of a hairy woman and comes out the enlightened hero to all women.

BLERGH. As an Indian-American woman living in a society obsessed with hairlessness, let me be the first to say that I don't really need straight men defending my body hair. I'm sure even Jon-Jon would have mocked me, as many boys did in middle school, for my own mustache, my arm hair, my unibrow. In the fifth grade, I was derisively nicknamed "Gorilla Arms" – a moniker that could have a brutal effect on any woman, nevermind a 10-year-old girl. I asked my mom to wax my legs in the sixth grade; she got through one and the pain was so horrible that she had to shave the other. I cried, a lot.

I've spent a lot of money over the years on waxes and threading and razors and eyebrow trimmers. Hair removal has become a ritual, and one that perhaps indicates that even my attitudes about my own body hair are still far from totally accepting, and that men aren't the only ones who have trouble accepting female body hair. Even in the Indian community, which is, on the whole, a very hairy people, there's a desire to be hairless. Whenever I go home I can expect a slew of comments from my mom and dad (yes, even dad) about how hairy my arms are and how I need to wax them.

I've stopped caring so much, largely out of laziness, but I guess sometimes I am still a bit embarrassed. My stubbornness has overtaken me, though, and I've determined that any man who wants to touch me can shut the hell up about my body hair. I'm not trying to trifle with any man who recoils at the sight of it — If you can't stomach it, you're not mature enough to be having sex. I was lucky that my first long, romantic relationship was with a dude who didn't care about my hair situation — maybe because he was exceptionally hairy himself (when I met him he had just turned 17 and had a full beard, dealmaker). I hesitate to praise him for his "open-mindedness", though — he was just demonstrating mere common human decency and respect for a woman's body.

Maybe that's why I am put off by this Jon-Jon character; his piece, which seeks to exalt hairy women, rings like the word of someone who has "seen the light" and the "error of his ways." It goes too far in the opposite direction, overcompensating by exoticizing these women. We don't stay hairy for your fetishizing pleasure, dude.

I don't know how to say this without sounding full of myself, but people are often surprised when I tell them I used to be bullied a lot. "But you're so pretty!" Sure, now, in adulthood, when my peers have shed some of their conceptions of what beauty can be. My thick eyebrows are admired now, but even compliments about them still make me slightly uneasy because those are the same eyebrows that caused me so much grief as a kid. I like my hair, and I like it for me, and it's not here to impress anyone. I can defend my own hairy self.