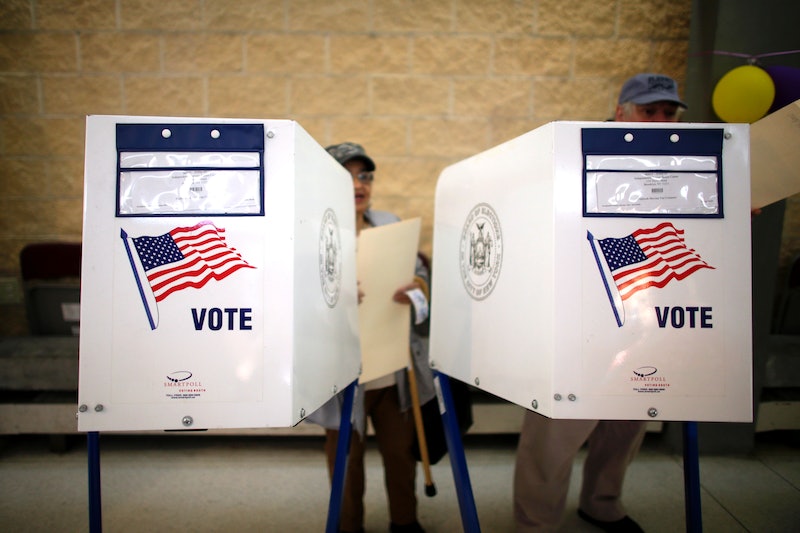 With New York out of the way, the primary season has finally started to pick up speed again. On Tuesday, there are a total of five states voting. And if you have struggled to entertain your political obsession that is the primaries these past weeks, you can relax in knowing that the next round of results are not so far away. In fact the voting gets underway early on Tuesday. The Connecticut primary starts at 6 a.m., so if you're a Connecticut voter, there's no excuse not to get it out of the way and vote before you head to work.

Showing up at your polling place bright eyed and bushy tailed is not an option for everyone, but Connecticut's got you covered on either end of your workday. Polling is not set to close until 8 p.m. — and if you're in line by 8 p.m., they'll let you cast your ballot. Whatever you do, make sure that you bring some sort of way to prove your residency. An ID with your address would work just fine but something like a utility bill is also an option. First-time voters have stricter requirements, so make sure to check out which documents would work best for you.

Connecticut is somewhat similar to New York, in that voters must belong to a party to cast a ballot in the primary election. Independent or "unaffiliated" voters can't participate. The good news is that you can join a party up until Monday, the day before the election if this applies to you — much more realistic than New York's Oct. 9 deadline, which kept some some voters from participating in the primary there. If, however, you want to switch parties — say from Republican to Democrat — the deadline already passed. There's a three-month waiting period for the switch to take affect.

So, all in all, you have very few excuses not to vote. Even if you're not registered in Connecticut, you can still register on election day and vote. You can't go directly to your polling place, though — there are only certain locations where you can register the day of.

Even though the state doesn't share all of New York's difficult voter registration rules, Connecticut election results may mimic its bigger neighbor. Both Donald Trump and Hillary Clinton are ahead in their respective races, although not with the impressive margins seen in New York. Clinton is currently ahead 51 percent to Sanders' 42. Trump has 48 percent of likely GOP voters; he's followed by John Kasich with 28 percent and then Ted Cruz with 19 percent.

Tune in to see how the polls hold up. You can watch the results roll in Tuesday night.