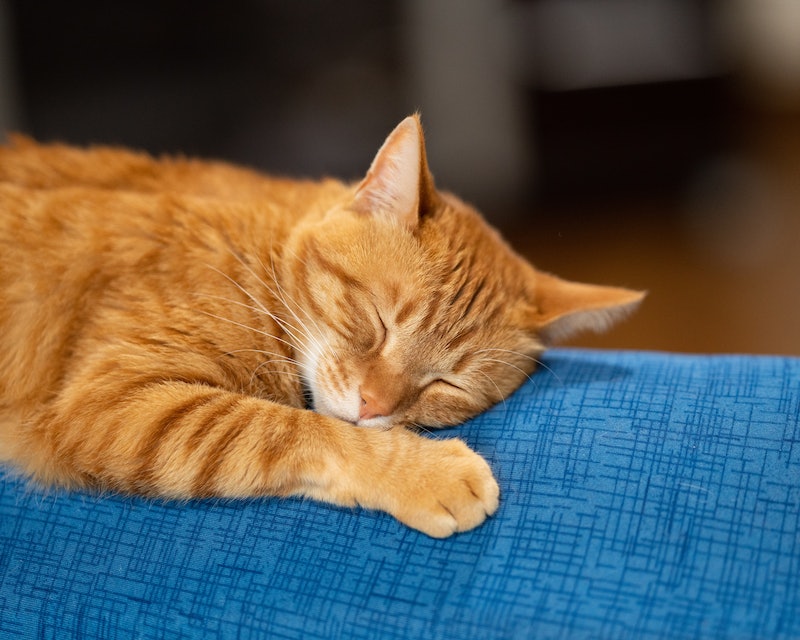 How many times have you heard someone say they're so sleepy they feel narcoleptic? It's one of the most well-known disorders out there, but as this comment (which, by the way, is more than a little offensive) demonstrates, the actual signs of narcolepsy are often misunderstood in pop culture. Take a second to imagine what narcolepsy looks like — if you're going by the popular perception, you may have envisioned someone who's constantly yawning and spends most of their time napping. Although narcolepsy is certainly characterized by unwarranted sleepiness, the reality of the disorder is a little more complicated.

First of all, understanding narcolepsy begins with understanding what typical sleep looks like. According to the American Sleep Association, sleep proceeds through five stages: One, two, three, four, and rapid eye movement (REM), though not necessarily in that order. The REM stage, which occurs approximately 90 minutes into a sleep cycle, is when the brain is most active; perhaps unsurprisingly, research has shown that's when most dreaming occurs. Unless sleep is (rudely) interrupted, the brain typically cycles through these stages four or five times a night.

For people with narcolepsy, however, sleep looks very different. "Narcolepsy is a disorder in which the duration of REM sleep is impaired," explains Dr. Milena Pavlova, a neuroscientist with the Division of Sleep and Circadian Disorders at Brigham and Women’s Hospital, to Bustle in an interview. Rather than cycling through other stages before they get to REM sleep, people with narcolepsy drop almost immediately into REM sleep, and they tend to experience fragments of REM sleep throughout the day. Furthermore, they have difficulty controlling their sleep-wake cycles, so they fall asleep quickly and unwillingly.

These "attacks" of sleepiness are the basis of narcolepsy, but they're not the only symptom. Let's take a look at five signs of narcolepsy below. As always, remember that the Internet is definitely not a basis for a diagnosis — if you recognize many of the following symptoms in yourself, your best bet is to get checked out by a medical professional.

Check It Out: Wide Awake and Dream: Memoirs of Narcolepsy, $14, Amazon

It's important to note that people with narcolepsy don't actually sleep more than other people, so their reputation as perpetual sleepyheads is somewhat undeserved. Rather, they sleep in short bursts throughout the day, and they may even find themselves unable to fall asleep at night. The problem is that they can't control when they sleep.

"[People with narcolepsy] don't have a larger quantity of sleep," Dr. Milena Pavlova tells Bustle. "It's that their duration of REM sleep is impaired."

Most people have dozed off when they shouldn't, but there's a difference between pulling a few too many all-nighters and literally being unable to stay awake for long periods of time, even in dangerous situations. According to Dr. Pavlova, the persistent "attacks" of sleepiness characterizing narcolepsy can seriously disrupt daily life.

"What narcoleptic patients most commonly present to the doctor... is that they fall asleep very quickly," she says. For example, she described patients who are forced to find a nearby park bench on which to nap, or who fall asleep while driving.

Although it's not unique to the disorder, sleep paralysis is actually a common symptom of narcolepsy. During REM sleep, the body's muscles are relaxed to the point of paralysis — it's perfectly normal, but when someone is abruptly awakened, they may temporarily find themselves unable to move. According to the National Institute of Neurological Disorders and Stroke, this (terrifying) feeling usually lasts just a few minutes.

According to the Division of Sleep Medicine at Harvard Medical School, cataplexy occurs in almost half of people with narcolepsy. Much like sleep paralysis, it's characterized by a sudden, temporary loss of muscle tone, but their causes are entirely different. Cataplexy occurs when someone is awake, and it's triggered by strong, usually positive emotions like laughter.

Finally, narcolepsy is typically accompanied by hallucinations during a sleep "attack." Referred to as "hypnogagic" when someone is falling asleep and "hypnopomipic" when they're waking up, the National Sleep Foundation reports that these hallucinations tend to be visual and may incorporate the surrounding environment. According to Dr. Pavlova, these hallucinations are essentially "dreaming when you're awake," and some patients may even have difficulty knowing when they've fallen asleep. (Only my ironclad self-control is preventing the addition of an Inception joke here.)

Although there's no cure for narcolepsy, there are a number of treatments available in the modern day — which is great, considering chances are it's more common than most people realize.