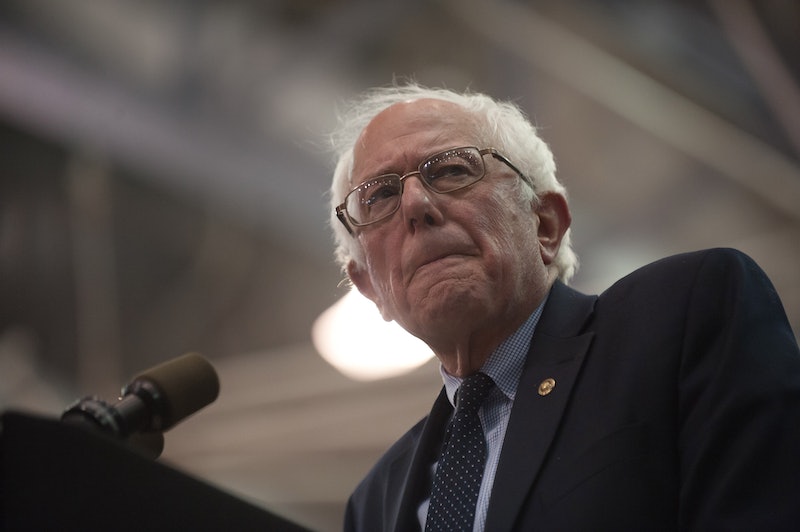 April 26 is a doozy for the presidential campaigns. Not one, not two, but five primaries will be held on that date. Among them is Maryland's primary, where Bernie Sanders and Hillary Clinton will face off again, hot on the heels of an intense New York primary. Clinton won New York, but will Bernie Sanders win Maryland?

Well, the early polls aren't looking so good for Sanders. From analyzing state polls, FiveThirtyEight predicts a measly two-percent chance of him winning. An NBC4 / Marist College poll doesn't see Maryland feeling the Bern either, with 36 percent of voters preferring him over Clinton, and Public Policy Polling finds only 33 percent of voters supporting him. That poll also finds that only 25 percent of African American Democratic voters in Maryland are for Sanders, which partially explains why he's likely to lose the state — they make up 40 percent of Maryland’s Democratic primary electorate. Public Policy Polling's stats also show Sanders losing white voters and the under-45 crowd, who is usually his bread and butter for primaries.

What's worse for Sanders is that, just like New York, Maryland holds a closed primary, so only registered Democrats may vote. Sanders is big among independent voters, but that won't matter if they don't register as Democrats in time.

But it's not as if Sanders is without supporters in the state. Heather Mizeur, a former candidate for governor and supporter of legalizing marijuana to pay for universal pre-K, endorsed him recently. Overall, though, Sanders doesn't tend to do as well in primaries as he does in caucuses. The Vermont senator has won nine caucuses so far, perhaps due to the fact that caucuses are good for diehard supporters willing to stay for hours to do multiple rounds of voting, and Sanders fans are some of the most diehard and enthusiastic ones out there. But only one state caucus, North Dakota, is left. Despite all his wins so far, Sanders is still trailing Clinton in delegates.

“Bernie Sanders would have to win landslide after landslide starting in New York to change that math,” David Axelrod, President Obama’s former campaign strategist, said on CBS’s Face the Nation Sunday. “At this point, it just looks like time is running out.” If Sanders loses Maryland along with the other four states in the April 26 primaries, it will be very, very doubtful that he will keep the Bern going all the way to the party convention in Philadelphia.