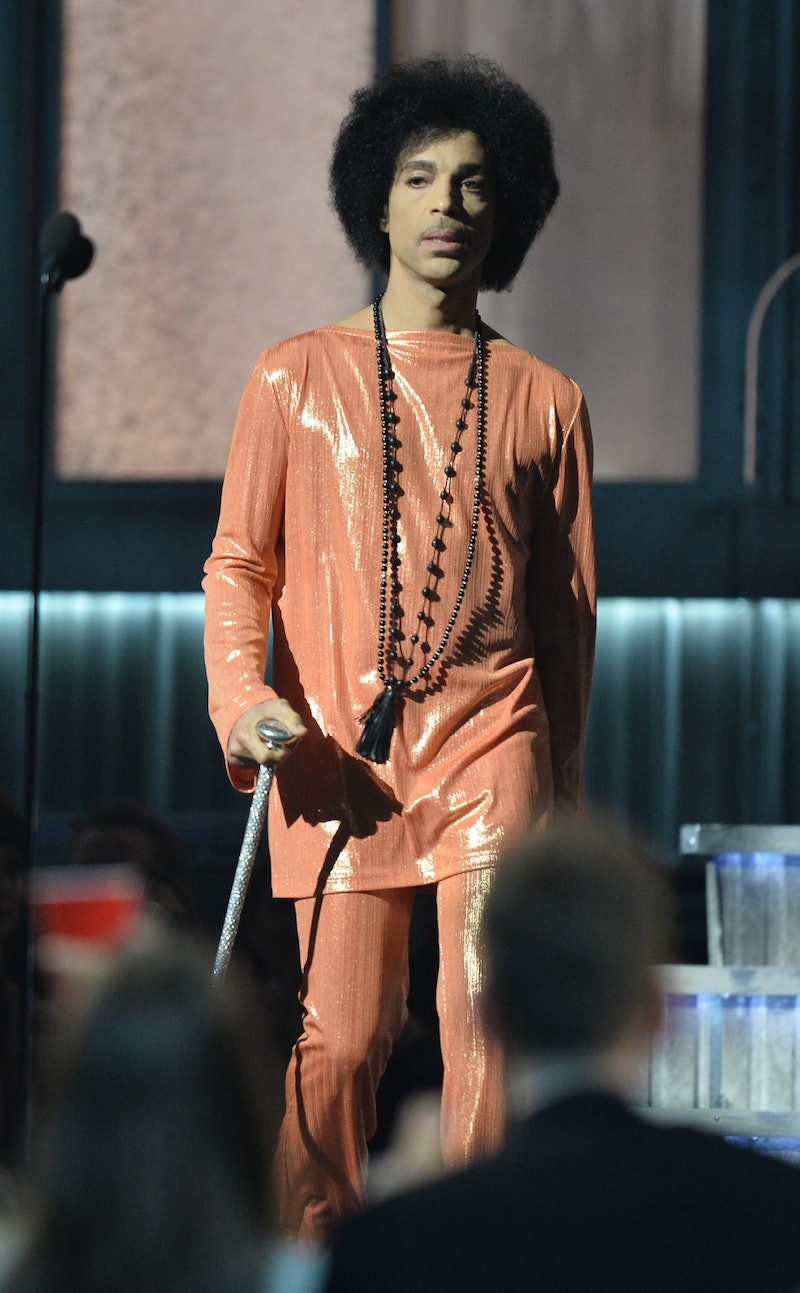 On Thursday, legendary musician Prince was found dead at his home, according to reports from TMZ and Reuters. The world-renowned singer and songwriter had passed away at the age of 57. Although the cause of Prince's death has not officially been released, nor an autopsy been concluded, TMZ reports that the singer had been battling "a bad bout of flu" and had been hospitalized last week, apparently in relation to his illness. The identity of the deceased at Paisley Park has not been confirmed by authorities to be Prince. Update 1: Prince's publicist confirmed Thursday that Prince had died at his home. Bustle has reached out to the Carver County Sheriff's Office in Minnesota, which also confirmed his death.

Update 2: On Thursday night, TMZ claimed that Prince allegedly suffered from a drug overdose days before his death. The site claimed that he was issued a "save shot" by doctors — a maneuver typically issued to counter the effects of an opiate — when his plane made an emergency landing on April 15. On Friday morning, TMZ alleged that Prince was taking Percocet, a prescription painkiller. Bustle reached out to Prince's reps in response to these reports, but has not yet heard back. Authorities are investigating the cause of death. An autopsy will be performed, but the results are expected to take weeks to emerge. On Friday, after Prince's autopsy, county sheriff Jim Olson said in a press conference that there was no "obvious" signs of trauma on the body and no indication of suicide.

Earlier: On Thursday morning, a death was officially reported at Paisley Park estate, the home and music studio compound owned by the musician. "Deputies are on scene of a death investigation at Paisley Park in Chanhassen. More info to follow. -814," reported the Carver County Sheriff's Office via Twitter. Minutes later, in an official statement, it was announced that the person who had died was Prince, real name Prince Rogers Nelson. He had been found unresponsive in his Paisley Park home.

According to previous reports by TMZ, which was the first outlet to confirm Prince's death, the superstar had been battling a bad bout of what was thought to be flu for weeks, which had forced him to cancel a couple of shows. Last Friday, after boarding a plane for his next planned show, however, Prince felt substantially more ill and the plane consequently landed and Prince was hospitalized, TMZ reported. He was released a short time later, and according to TMZ's report, "the nature of the medical emergency [was] unclear."

The very next day, Prince showed up at what would be his final concert, a dance party near his home in Paisley Park. He apparently did so to reassure fans that, in spite of his earlier hospitalization, he was just fine. He didn't play, but showed off a guitar to fans. "Wait a few days before you waste any prayers," he told the crowd.

Prior to his being found unresponsive at his home, there had been no official mention of his health for several days.

Meanwhile, one of Prince's last tweets is going viral on social media.

Authorities are currently investigating the cause of Prince's death.

"It is with profound sadness that I am confirming that the legendary, iconic performer, Prince Rogers Nelson, has died at his Paisley Park residence this morning at the age of 57. There are no further details as to the cause of death at this time," Prince's publicist tells Bustle in the official statement.