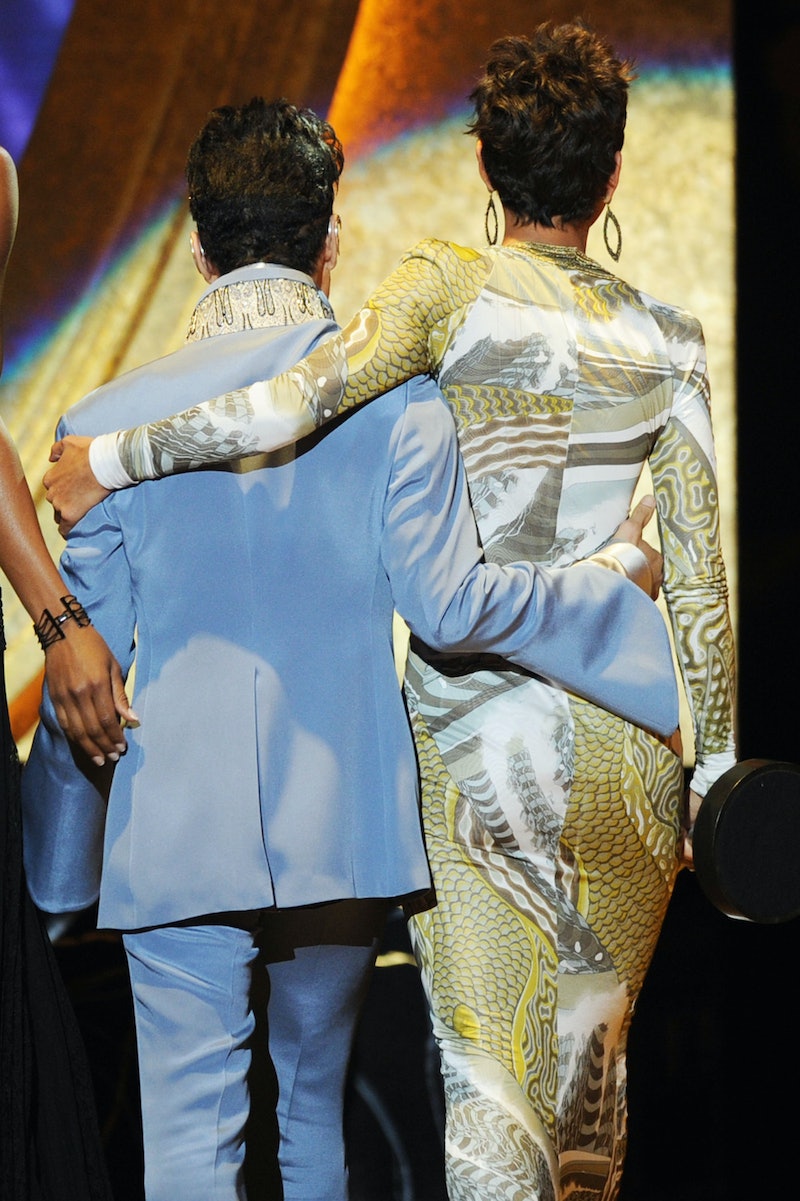 While other Prince fans will remember partying like it was 1999, or trying to figure out exactly when doves cry as their first real memory of the prolific pop music icon in the wake of Prince's death at the age of 57, I will remember being a 9-year-old girl watching the video for "The Most Beautiful Girl In The World" with my little sister over and over on VH1. This was in 1994, right after Prince had become the Artist Formerly Known As. He had just taken on that unpronounceable symbol as his moniker, and the first thing he did was release this ballad about his soon-to-be wife, Mayte Garcia. It's a rather cheesy love song, with a sexy groove that is not too provocative for a 4th grader who wasn't really that interested in boys. It's a song that most Prince fans probably wouldn't admit they love.

Certainly, with his impressive lists of hits, it's worth only a passing mention, but, it was the one song I immediately thought of after Prince's death was officially confirmed to Bustle in a statement: "It is with profound sadness that I am confirming that the legendary, iconic performer, Prince Rogers Nelson, has died at his Paisley Park residence this morning at the age of 57. There are no further details as to the cause of death at this time." With all of his hits — and he's got so many hits — this was the song that would never define his career, but it could be the example of who he was as a person. Someone who loved and respected the women he collaborated with in life, love and work — and more often than not, all three.

"The Most Beautiful Girl In The World" is a tribute to one woman, but it sounded as if it was a dedicated to all women. In that falsetto, Prince sang about physical beauty, the kind only God could create, but he also sang about the kind of beauty you won't see just by looking at someone. "And if the stars ever fell one by one from the sky/ I know Mars could not be too far behind," Prince speak-sang on the bridge. As a kid, it made me laugh. But, as I got older, I started to appreciate for its last two lines, "Cuz baby, this kind of beauty has got no reason to ever be shy/ 'Cuz honey, this kind of beauty is the kind that comes from inside." Prince had sexy songs, but this was about love and devotion. Here was this guy who surrounded himself with beautiful women, letting them know he bowed down to them.

It was clear in the video, which had him playing a supporting role to a multitude of women who were watching their own accomplishments on a screen, dubbed "The Beauty Experience," which ranged from giving birth to winning a gold medal to making people laugh. The most striking image is when that woman, the one who makes them laugh, takes off her bright red wig to reveal a short pixie haircut. As if this woman realized she didn't need to pretend to be something else to be beautiful, she was beautiful all along. The women in this video were beautiful, but in different ways. Their beauty was real and based on who they were as people. It was about celebrating these women for the moments in which they felt at their most beautiful, which seemed to coincide with the moments where they felt the most accomplished.

I won't say that, as a kid, I sang along to this song or watched this video thinking it was some sort of female empowerment anthem. At the time, I didn't have some sort of deeper understanding of this love song, I just thought it was catchy and kind of funny. I would joke about how silly and over the top it was, but I loved it unabashedly. I would sing this song with my sister, trying to hit those high notes and taking on the harmonies. But, now that I'm older and know more about Prince and his legacy beyond this 1994 single, I think of this song, and I think of how Prince seemed to gravitate towards powerful, talented women throughout his career.

He mentored (and yes, yes he also dated) fellow musicians like Sheila E., Apollonia, Vanity and Sheena Easton. He wrote hits for Chaka Khan with "Feel For You" and Sinead O'Connor with "Nothing Compares 2 U." Later in his career, he continued to seek out female talent including British singer Lianne La Havas, and his most recent all-female backing band, 3RDEYEGIRL. He also talked about how he adored female artists like Janelle Monáe, Beyoncé, and especiallyAdele, about whom he told The Guardian last year, “When she just comes on and sings with a piano player, no gimmicks, it’s great." There is even the fact that, in a 2013 Billboard interview, Prince revealed he has a "team of female black lawyers" to make sure his affairs are all in order.

As a kid, "The Most Beautiful Girl In The World" was just another love song to me. But now it's an example of Prince's appreciation for the fairer sex. An appreciation that likely stemmed from his own relationship with gender. As he sang on "I Would Die 4 U," "I'm not a woman/ I'm not a man/ I am something that you'll never understand." Or perhaps it sprang from being a activist who fought for justice in his life and his music. One thing I can understand now, though, is no matter who he was, it's plain to see, he was a guy who had a soft spot for women, and because of this song, because of him, I refuse to settle for being treated like anything less than the "Most Beautiful Girl In The World."