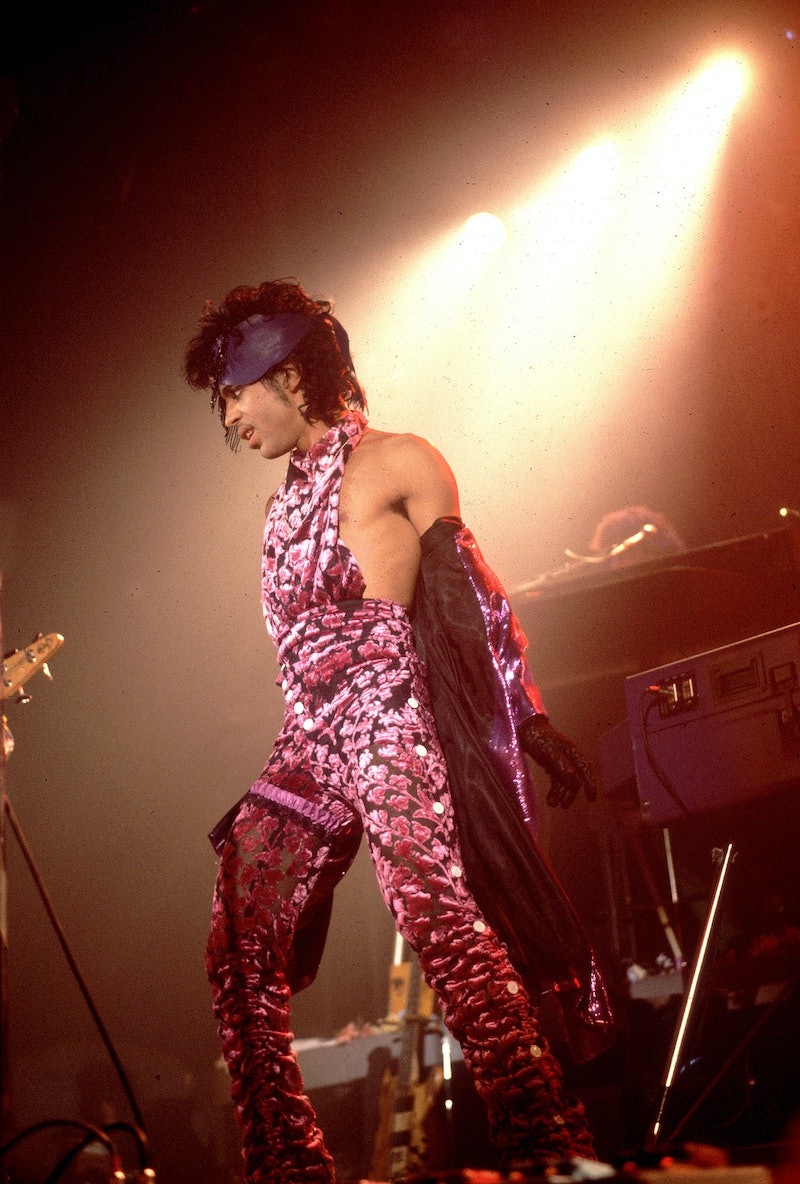 Prince always has been and always will be a fashion icon — something I can't help but remember after hearing news of the singer's passing on Apr. 21. Prince's representatives confirmed his death in a statement to Bustle, saying, "It is with profound sadness that I am confirming that the legendary, iconic performer, Prince Rogers Nelson, has died at his Paisley Park residence this morning at the age of 57." While we all wait to learn more, I can only reflect on the ways that Prince most affected my life, and the lives of many people like me: through his fashion.

Although Prince's musical legacy is undeniable, aesthetics were also a key component of his identity as a public performer. Following in the androgynous steps of Bowie, Lou Reed, and Iggy Pop, Prince showed us that playing with gender codes in fashion wasn't just a phase for him. Perhaps most importantly, Prince filled a space in androgyny that had previously been occupied predominantly by white people.

The musician broke boundaries with his style, and even as a femme, cis woman, this touched me. He presented himself how he wanted to, disregarding jokes about his visage and becoming a beacon of hope for a generation that needed androgynous fashion to continue making waves in the public eye. Prince promised us that we were allowed to present however we so wished, regardless of our assigned gender or so-called fashion rules. These looks are among some of my favorite demonstrations of his genderless expression, although I'm sure each fan has their own list Prince looks that personally inspired them, too.

Parade featured a simple black and white image on its cover. That kind of minimalism is not especially associated with Prince. But with the feminine facial expression, almost vogue-ing hand, and the crop top, he created a cover that you might expect from a woman, taken over by a man. Through this, he showcased how the ridiculous gender coding we utilize in this world can even apply to posing.

This one feels like the opposite of Parade's artwork, but is definitely my favorite image of Prince of all time. I doubt I even have to explain how Prince plays with gender here, but the overt suggestiveness is far from the only reason I like this picture so much. I love it because it's incredibly beautiful. Simple as that.

All-white, a glamorous hood, and a statement necklace? Prince always pulled out beautiful androgynous looks no matter what the cultural climate, staying true to his style rather than the rules of others.

Purple Rain is the album that most people seem to associate with Prince, and rightly so. It's musically stunning, and helped craft the character we all came to know and love. Does anyone else automatically think of the color purple when picturing the star? This album is probably why. Prince claimed a traditionally feminine hue and made it his own throughout the rest of the '80s.

For Purple Rain the album to exist, Purple Rain the film had to come first. It's perfect watching for this evening in memory of one of the world's greatest musicians — a man who made being different not only OK, but desirable.

6. Gold Sequins And A Purple Pump

Nothing about this outfit doesn't appeal to me. Its garish gorgeousness is just as bold a statement as wearing a plain black slip dress would be. The OTT vibes are the ultimate inspiration for anybody who loves overdressing.

You don't see many men rocking velvet suits, even these days. He may be wearing a pretty straightforward suit here, but the beautiful crushed velvet should remind you that Prince's style was always going to be everything.

What I personally loved about Prince's style was his ability to take traditionally masculine silhouettes and make them visibly feminine. This all-white lace number is an excellent example.

Prince's eponymous album was revolutionary for 1979, presenting femininity through gendered coding, without even having to touch makeup or clothing. From the pose, to the background color, to the heart dotting the "i," Prince knew how to play with gender subtly from the very beginning of his career.

A bare male chest isn't automatically androgynous, but paired with low-rise pants, a load of belts, and a heap of beads and elbow-length gloves, it's likely to become so. This was a perfect mish-mash of the masculine and the feminine that could only have been pulled of by the one and only Prince.

These are but a few of the looks that come to mind when I consider Prince's sartorial legacy. Tracked alongside his musical career, it's clear that androgyny was never used as a marketing ploy for this star, but simply an expression of beauty that matched his musical artistry.

It seems only fitting to let Prince see us out. As he put it in the lyrics for "I Would Die 4 U," "I'm not a woman. I'm not a man. I am something that you will never understand."

More like this
Phoebe Dynevor Serves ‘Bridgerton’ Underboob In Stunning Floral Gown
By El Hunt
Beyoncé Wore A Golden Sheer Gown At Her VIP Dubai Concert
By Sam Ramsden
J.Lo's Micro-French Manicure Has A Fun, Sparkly Twist
By Olivia Rose Rushing
The Biggest Fashion Moments Of Paris Couture Week 2023
By Dominique Norman
Get Even More From Bustle — Sign Up For The Newsletter
From hair trends to relationship advice, our daily newsletter has everything you need to sound like a person who’s on TikTok, even if you aren’t.